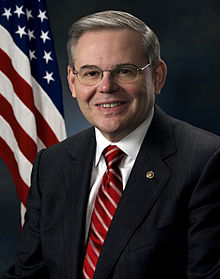 Robert Menendez’s “I am not a crook” presser, following his indictment by the Justice Department, pretty much ran to form, including his personal Hispandering simultaneous translation en Español. One of the underreported ironies of this story is the fact that some of the charges revolve around a scheme whereby the Soprano State’s Senator demanded visas for his benefactor’s foreign girlfriends. Open borders zealotry-masked as compassionate advocacy, naturally-and naked self-interest are almost always intertwined, although never remarked upon by a deficient news media eager to highlight the existential plight of illegal aliens.

Whether Senator Melendez’s eventual replacement-like his predecessors, I doubt he will emerge from this scandal unscathed-will be as receptive to criminal alien sex offenders remains to be seen, but you can be assured that he or she will most likely be devoted to the same warped principles regarding immigration and border control. And the press corps will continue to manipulate the news cycle in order to obfuscate the matter. The citizens of New Jersey, of course, will be all the poorer for it, as Mr. Melendez’s escapades illustrate.