Manifestly Unqualified: The Case Against Hillary 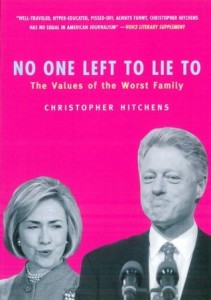 It seems as if the alternative media has rallied around the flag, which in Hillary’s case was probably purchased by benefactors like Goldman Sachs and the Gulf Arab slave state of Qatar. After all, who can resist GIRL POWER, even if it’s marshaled on behalf of someone who’s spent much of her career destroying the reputations of Bill Clinton’s comfort women? To get a sense of the cognitive dissonance at work, it’s worth reading this week’s Village Voice, which all but admits its preferred candidate is an inveterate liar, albeit one who can answer that 3 A.M. call!

By the way, does anyone else recognize the absurdity of Clinton backers running a variation on an ad which was universally panned-from a race which she lost-in order to lambast the purported shortcomings of Donald Trump? If there are any calls being made to a Clinton White House after midnight, I’m almost certain they will be made at the behest of sleazy foreign donors who want a return on their investment. That is indeed the purpose of the single greatest legal money laundering scheme on the planet, one which would make even El Chapo green with envy.

With all her seemingly disqualifying character traits and extensive history of semi-criminal actions, not to mention, thralldom to corporate interests, you would expect sincere leftists to express some reservations about her candidacy. You would think that even those who believe her to be the best choice in a binary election have enough integrity to admit that she is a dreadful choice, one who cares not so much about being a progressive as the acquisition and retention of power. The problem is that that is what progressivism, at its core, has become. The Faustian bargain the left has made in this election involves sacrificing its purported principles, including its increasingly hypocritical rhetoric about the underclass, in order to achieve its immediate political aims, e.g. importing millions of immigrants from the third world, cauterizing the 1st and 2nd Amendment to the Constitution, and crushing any remaining opposition to the cultural domination of social progressivism.

Fortunately, there are a handful of leftists who have some degree of integrity, including Green Party presidential candidate Jill Stein, who was one of only public figures on the left to publicly admit that her Democratic opponent should have been indicted. Her honesty about the deficiencies of Hillary Clinton the candidate-as well as the human being-stand in stark contrast to the pathetic fealty liberal media outlets and talking heads have shown towards a woman who, were she a Republican, would probably be sitting in a federal penitentiary instead of seeking the most powerful office in the world.

Another voice remarkable for its clarity is incendiary cartoonist Ted Rall, who’s pointed out 3 of the biggest reasons why Hillary Clinton does not belong in the Oval Office. Although there are many, many more-including a capacity for deception that is boundless and a wholly repellent personality-the 3 enumerated by Rall should be of particular interest to liberals, who tout their intellectual superiority and routinely hector insufficiently feminist public actors. The fact that most are seemingly unconcerned with these very problematic issues makes one question their purported convictions.

Finally, Doug Henwood has published a book, My Turn: Hillary Clinton Targets The Presidency, which should be required reading for any leftist tempted to ignore the consequences of their alliance with the Clinton machine. It begins, appropriately enough, with an epigram by Brad DeLong describing Hillary’s most relevant Executive experience, i.e. her disastrous oversight of health care reform during the first year of the Clinton presidency. Although he has also been brought to heel, this is his description of HRC’s signature issue back then:

My two cents’ worth–and I think it is the two cents’ worth of everybody who worked for the Clinton Administration health care reform effort of 1993-1994–is that Hillary Rodham Clinton needs to be kept very far away from the White House for the rest of her life. Heading up health-care reform was the only major administrative job she has ever tried to do. And she was a complete flop at it. She had neither the grasp of policy substance, the managerial skills, nor the political smarts to do the job she was then given. And she wasn’t smart enough to realize that she was in over her head and had to get out of the Health Care Czar role quickly.

“Hillary Rodham Clinton has already flopped as a senior administrative official in the executive branch–the equivalent of an Undersecretary. Perhaps she will make a good senator. But there is no reason to think that she would be anything but an abysmal president.

To quote another former FLOTUS, Just Say No.

This entry was posted on July 24, 2016 at 5:20 PM and is filed under Analysis, News, News and Analysis. You can follow any responses to this entry through the RSS 2.0 feed.