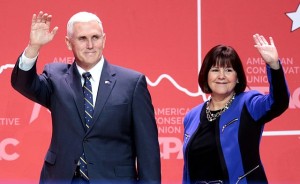 -Without being able to peer into the mind of Donald Trump, it’s hard to discern what prompted him to pick Governor Pence. If we take his words at face value, party unity was one of the primary motivating factors. That undoubtedly played a role, although I doubt it will sway Republicans in the Dump Trump camp, whose obsession borders on the pathological and will undoubtedly persist through Cleveland. My take is that this choice is a bid to boost the perceived statesmanship of the GOP going into November. The gravitas deficit, a la Dick Cheney and Gaffes Biden, who was at one point inexplicably believed to add stature to a presidential ticket, is something HRC’s media lapdogs have tried to play up throughout this campaign. Keep in mind, Donald Trump’s opponent is a woman who owes her political career to the slanders she professed in defense of a man who used the Oval Office as a brothel, but this is the world we live in.

-While some analysts have already mocked Pence’s pronounced lack of charisma, the truth is that this is one area in which the Republican ticket needs no artificial enhancement. If Republicans had nominated another sacrificial lamb like Mitt Romney, a man who can be emasculated by the likes of Candy Crowley in front of a national television audience, then perhaps a fire-eater would be in order. However, Donald Trump is an individual who is not only capable of eviscerating his Democratic opponent and her myrmidons in the press, but relishes the opportunity. As Michael Malice has pointed out, Trump has already neutralized nearly the entire playbook the Democratic Party has used to great effect in previous campaigns. He has the rhetorical equivalent of a Predator drone at his disposal, while Hillary will be bringing a pistol whose cartridges are mostly blank. The need for Pence to assume the traditional attack dog role of a presidential running mate has not only been lessened, it’s been virtually eliminated.

-The ideological reservations expressed by Trump supporters is a more serious matter. Although I don’t share Ann Coulter’s revulsion, I do appreciate the sentiment, especially as a staunch advocate for lower immigration levels and more stringent immigration enforcement. There’s no getting around the fact that Mike Pence was-even if he’s not currently-a supporter of amnesty. Or, as some have dubbed it, amnesty lite. Even more disturbing is the reaction of the Club For Growth, which can only be described as jubilant. If you want a barometer for terrible immigration policy, then the CFG is your 501(c)(4). To compound matters, Pence is also an enthusiastic supporter of the TPP, a trade agreement that repulses both protectionists and genuine advocates of free trade but which is lauded by globalist, managed trade political consensus, i.e. Hillary’s base. That being said, even philosophically Pence is not a complete loss, as a predictably tendentious New York Times profile reminds us. Opposing both the fiscally calamitous-and potentially catastrophic-prescription drug benefit AND federalization of education bequeathed to us by an unholy alliance between Ted Kennedy and George W. Bush? The horror!

-So, we’ve established that Pence does have some conservative principles, although not nearly as many as conservative voters and Trump supporters would like. In my view, the above analysis is pretty superfluous at the end of the day because Vice-Presidents do not mean very much, an opinion shared by at least one former VP. The Trump candidacy will rise and fall based upon what is done by, and how the electorate responds to, Donald Trump. The same holds true for any theoretical presidency. With the exception of Vice-President Cheney, it’s hard to think of a VP in recent memory who exercised a significant influence over White House domestic or foreign policy and I don’t see why Mike Pence would be the exception to that rule. For all the sturm und drang over this pick-which is, admittedly, the most important personnel decision Trump has made so far-it doesn’t really matter. This election will be determined by how voters feel about Donald Trump and his opponent, a politician who is truly frightening.

This entry was posted on July 17, 2016 at 5:07 PM and is filed under Analysis, News, News and Analysis. You can follow any responses to this entry through the RSS 2.0 feed.