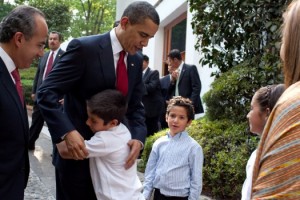 Even as events conspire to make hash of the narrative contrived by Hillary Clinton and the national media, i.e. Vladimir Putin’s exposure of the awfulness of the Democratic Party is the true threat to American democracy, the politically correct variety show in Philadelphia proceeds apace. Before tonight is over you will have endured the entire spectrum of Democrat hideousness, from the not quite prime-time address by career limousine Marxist Bill de Blasio, to the condescending stylings of golf aficionado Michael Bloomberg, to the capstone of the evening, an address by the POTUS himself, Barack Obama.

No doubt we’ll be treated to more effusive praise of the ongoing dissolution of this country’s borders and erasure of our sovereignty. You can view the proceedings, a national examination of America’s decay, here.

One Response to Parade Of Horribles