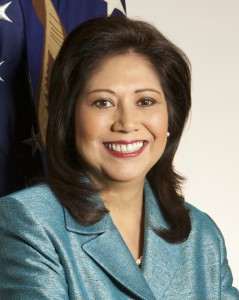 With the resignation of Labor Secretary Hilda Solis, it’s instructive to take a brief look over the Obama administration’s  labor policy priorities these past four years. Although the prime objectives of organized labor, such as the enactment of card check legislation, never saw the light of day during President Obama’s first term, labor unions did achieve some significant administrative victories. What’s more, the battle over labor regulations and law-both executive and legislative-was a focal point of national political discussion leading up to the 2012 presidential election.

What did not attract as much notice, unfortunately, was the systemic dismantling of immigration enforcement, especially during the last two years of Barack Obama’s first term, which arguably will have a significant impact upon the American economy in the years ahead. Even though I continue to believe that the negative consequences of mass immigration-especially of the largely unskilled sort we’ve seen since the 1965 Immigration Act-can’t be reduced to mere economic concerns, the cumulative cost of this wave includes a significant economic impact.

In addition to taxing already overburdened social welfare programs-to say nothing of the public education, criminal justice and health care distribution systems-the hundreds of thousands of low skilled immigrants we accept every year often displace the most economically insecure Americans, including some of the President’s most reliable political supporters.

Barack Obama’s immigration and labor policies seem designed to exacerbate the latter problem, a view confirmed by looking at recent job gains, which seem to have accrued solely to the benefit of immigrant workers. The tenure of Secretary Solis dovetailed nicely with this agenda, which included international agreements protecting the labor rights of illegal aliens from Latin American nations. While ensuring that workers are paid a wage rate consonant with the laws of the land is an admirable stance, one wonders why this administration did not deem it worthy of its ambition to deport these  workers, who-like their employers-are breaking the law.

It’s not as if these individuals are unknown to federal immigration officials. After all, Solis visited illegal day laborers in this very borough in the aftermath of Hurricane Sandy. However, holding illegal aliens accountable for their actions seems to be inimical to the political needs of the President and his political machine, which has expanded the vast administrative amnesty that has existed for the past two years to encompass everyone he or Janet Napolitano deems to be non-threatening, including virtually everyone who can feign interest in being a student and those who’ve committed multiple misdemeanors, i.e. criminals.

Like the highly politicized distribution of economic stimulus funds, this administration’s labor and immigration policies are not designed with the interests of Americans in mind so much as the best results for itself and its political and financial benefactors. Although Hilda Solis set a pretty low bar to clear, if past is prologue don’t expect her successor to be much of an improvement.

This entry was posted on January 10, 2013 at 1:21 AM and is filed under Analysis, News, News and Analysis. You can follow any responses to this entry through the RSS 2.0 feed.