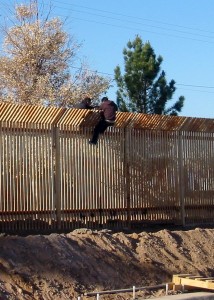 One of the most insipid weapons in the arsenal of stupidity which constitutes open borders dogmatism is the argument that building fences does not work as an impediment to illegal immigration. A popular bit of sophistry expertly lampooned by Adam Carolla in his hilarious first book, In Fifty Years We’ll All Be Chicks.

Second only to “torture doesn’t work” in the retarded-statement category is “fences don’t work.” So all those East Berliners who drove around in two-stroke cars and ate stale bread for forty years should have just strolled into West Berlin and gotten themselves a breakfast burrito? Boy, they must be embarrassed, having spent all those years trapped behind a fence didn’t work.

Notwithstanding the recent reenactment of a scene from The Bourne Identity inside of the White House , defensive barriers and barricades such as walls and fences are actually pretty efficacious at achieving their intended objective, i.e. stopping undesirables from breaching a person-or a nation’s-property. To see just how effective a properly constructed and policed fence can be, I suggest taking a look at the Jewish State, which has a lot of empirical evidence that refutes the canard so often employed by those who would seek to turn this nation into an annex of Mexico.

For a highly amusing, yet incredibly illuminating, overview and history of this subject, I suggest checking out a brilliant post from this past summer on The Passing Parade, which was recommended to me by a dear friend who happens to share my concern about the willful stupidity and malice which seems to animate most government policy, especially regarding immigration issues.

This entry was posted on October 4, 2014 at 12:31 AM and is filed under Analysis, News, News and Analysis. You can follow any responses to this entry through the RSS 2.0 feed.