Lights Out? (Europe and the World Mourn) 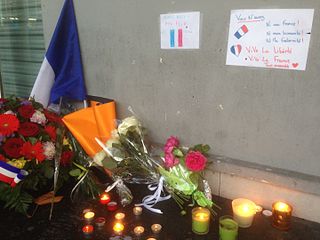 One of the most frustrating aspects of news coverage of the latest jihadist massacre on French soil is its repetitive quality. Just as with the Charlie Hebdo assassinations and Porte de Vincennes siege, along with other Islamic blood-lettings within Europe, the multicultural messaging service has gone to extraordinary lengths to obscure the rather obvious reasons why this horrific act of war took place.  The Daily Beast is an archetypal example of this species of journalism, ascribing blame to the socio-economic difficulties faced by Muslim immigrants and questioning the efficacy of Belgian intelligence-gathering methods. The cognitive dissonance at work is exemplified by media outlets which have referred to the Muslim invaders who perpetrated this atrocity as Frenchmen, rather than more appropriate terminology, such as invaders.

While the facts on the ground reporting is valuable-you can find a live blog of the Paris attacks and their aftermath by going to The Guardian website-the analysis of this unprecedented bloodshed by Islamic terrorists on French soil is woefully lacking. Even as milksop, Chamber of Commerce lackeys such as Rick Snyder recognize the inherent danger in welcoming thousands of unverified Syrians to the United States, the mainstream media refuses to acknowledge the elephant-or in this case, jackal-in the room. Just today, I’ve listened to no less than 3 reports lamenting the impact this latest jihadist massacre will have on Europe’s Muslim population, including a segment on what is arguably the most insipid NPR program in existence, The Takeaway, where the interviewee praised Germany’s Dr, Kevorkian, Angela Merkel, for her open door policy, vis-a-vis Middle Eastern and North African refugees.

There are, of course, rational appraisals of what’s currently happening overseas, but you have to scour the Internet in order to find these alternative voices. One of them is David P. Goldman, who accurately evaluates what France should expect-and how its government will respond-in light of these ruthless attacks on its citizens. Contrary to Prime Minister Hollande’s bold declarations in the wake of this unspeakable atrocity, Spengler believes that the ruling class in that country will not have the fortitude to do what is necessary to weed out what is now a domestic base of terror. Of course, there are many men and women in France who yearn to resist the tide of anti-civilization that has encroached upon their nation without their consent, and they are probably going to support Marie Le Pen in the upcoming election.

The fact that millions of voters are willing to defy the consensus of bien-pensant opinion in order to help preserve and maintain what remains of a culture that can only be destroyed but certainly not replicated by the parasites who are living upon its fruits demonstrates that the lights haven’t yet gone out in the West. It’s a welcome and hopeful sign of a future that isn’t shaped by the forces of darkness, where we do not have to repeat the mistakes of the past. A future where the City of Light is not extinguished.

This entry was posted on November 16, 2015 at 12:04 PM and is filed under Analysis, News, News and Analysis. You can follow any responses to this entry through the RSS 2.0 feed.