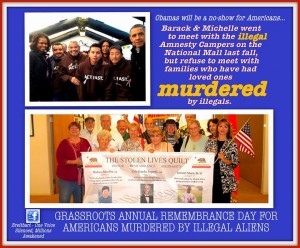 As spring approaches, we must not forget the lives of those who are no longer here to enjoy the warm embrace of their friends and families. Tomorrow is National Remembrance Day, an occasion where patriotic Americans across the nation honor the memory of those whose lives were taken by our government’s negligent immigration policies. For more information about this event, visit Stopping Obama’s Amnesty, a Facebook page dedicated to exposing the perils of maintaining this administration’s current stealth amnesty, as well as highlighting the folly of Congress’s attempts to foist a wholesale legislative amnesty upon a reluctant American public.

Jamiel Shaw Sr., whose beloved son was murdered by an illegal alien gang banger, will discuss these issues on his radio podcast, Jamiel’s Law, which you can listen to at 12 AM, PST, tomorrow night.