The original “City of Refuge : Stop the Refugee BAN 24 hour Action” planned  for March 14th had been postponed because of snow: the blizzard that didn’t.

Still, it was a lot of snow, so they rescheduled to March 28th and NOW… we had RAIN. 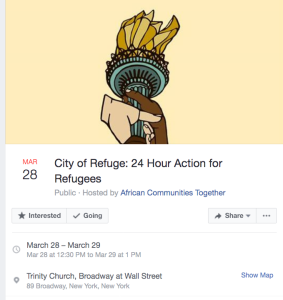 Cameras and rain, an even less friendly combination, but curiosity took me downtown anyway to 40 Wall St. Day 1, March 28, 2017 (Noon-1pm) began outside a TRUMP Building at 40 Wall Street, followed by a night sleeping in a temporary “Tent City” outside historic Trinity Church.

[Trinity Church was a partner in this action]

“To bring attention to the need for more humanitarian refugee policies, Trinity is partnering with a coalition of organizations, including African Communities Together and the Interfaith Center of New York, to host a refugee action, including two marches, teach-ins, interfaith services, and an overnight “refugee tent city.” From The Protest’s Press Release:

“We are calling for an end to the refugee ban, the preservation of asylum and TPS (temporary protected status), and truly humanitarian immigration policy. We will organize 24 hours of powerful actions in solidarity with refugees. We are invoking the spirit of the Statue of Liberty and the history of New York as a City of Refuge for immigrants and refugees from around the world.”

On Day 2, March 29, 2017,  the protestors would march to Federal Plaza, past the African Burial Ground, ending at Foley Square. But, first, March 28. Noon. I arrived outside the 40 Wall st Trump Building as the protestors were stacking their rafts. Inflatable dinghies. Very orange. Typically, the left knows how to do street theatre photo-ops, making the trip worth the inclement weather. Lots of cameras were on-hand waiting. Ready. As the small crowd grew, there were now a few signs carried by Koreans of MinKwon amongst the umbrellas. Rafts laid out. Photos in rafts. A banner from African Communities Together. And a steady rain that was not abating. Still, no one was leaving. Waiting patiently. The sound system spazzing in the rain caused a brief delay and then the speakers began.

After a nearly three-year wait, a five-judge panel in New York ruled this week that César Vargas — a native of Mexico and longtime New Yorker — can be admitted to practice law in the state he’s called home since he was 5, even though he remains an undocumented immigrant.

Elizabeth fled South Sudan at seven years old and waited five years to be resettled in the U.S. Their messages were clear: “Stop the attacks on illegal immigrants, Mr President. Stop ICE. Open Borders, Si. No to immigration laws. YES to Sanctuary Cities.” Nothing new here. Still, they managed to hold a decent rally in the rain. 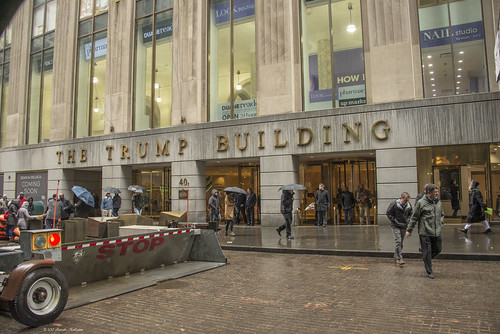 After the speeches had concluded, I headed back uptown so I didn’t walk the brief jaunt to Trinity Church – a short hop away (see picture below) – as they carried their very orange rafts to the temporary Tent City they set up outside the church. At Trinity Church the schedule would include:

Preferring rain to a ‘blizzard”, the protestors spent the night in a tent city at Trinity Church as they protested the refugee ban thoughout the night.

The south churchyard of 321-year-old Trinity Church hosted a tent camp-out as part of City of Refuge, to support refugees and immigrants. pic.twitter.com/BptHUDGg9s The Sun was out. Temperature pleasant, even though the wind was a bit brisk. The protesters spent the night at Trinity Church and were now, after passing the African Burial Ground, ending their action in Foley Square (across from Federal Plaza) and still had those orange dinghies and drums (lots of African Drums). Other than laying out those bright orange dinghies, this was a decidedly low impact second day protest/rally EXCEPT for some unplanned street theatre. Not organized by the protestors, seen below is  “Chairman Mao’s”, Gary Pneuff. 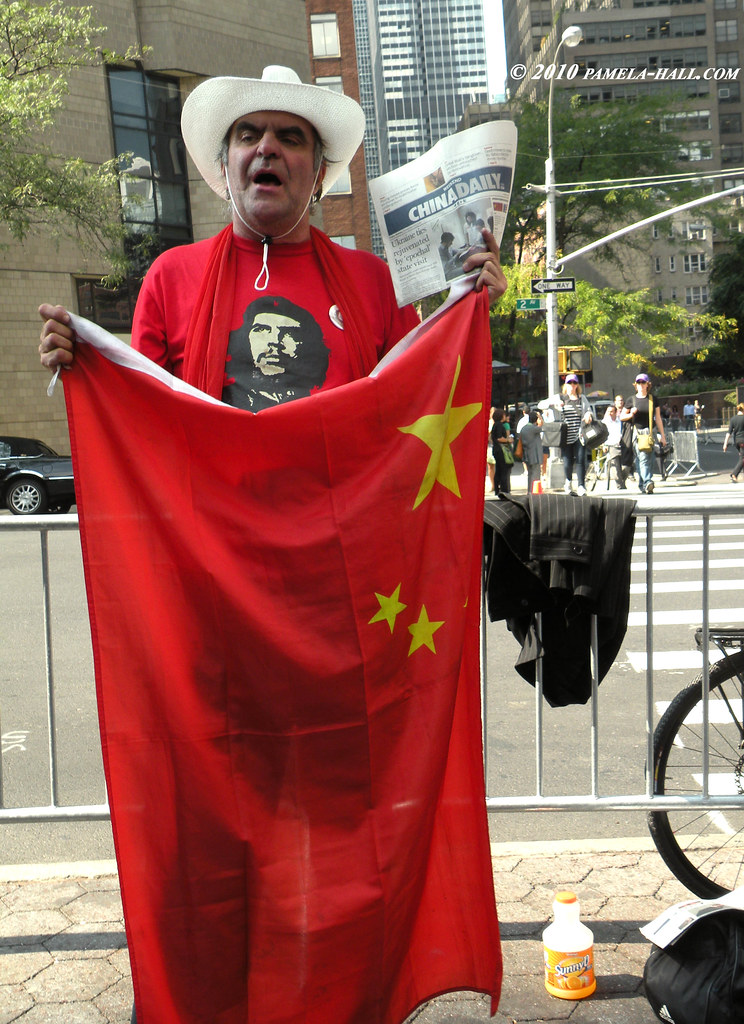 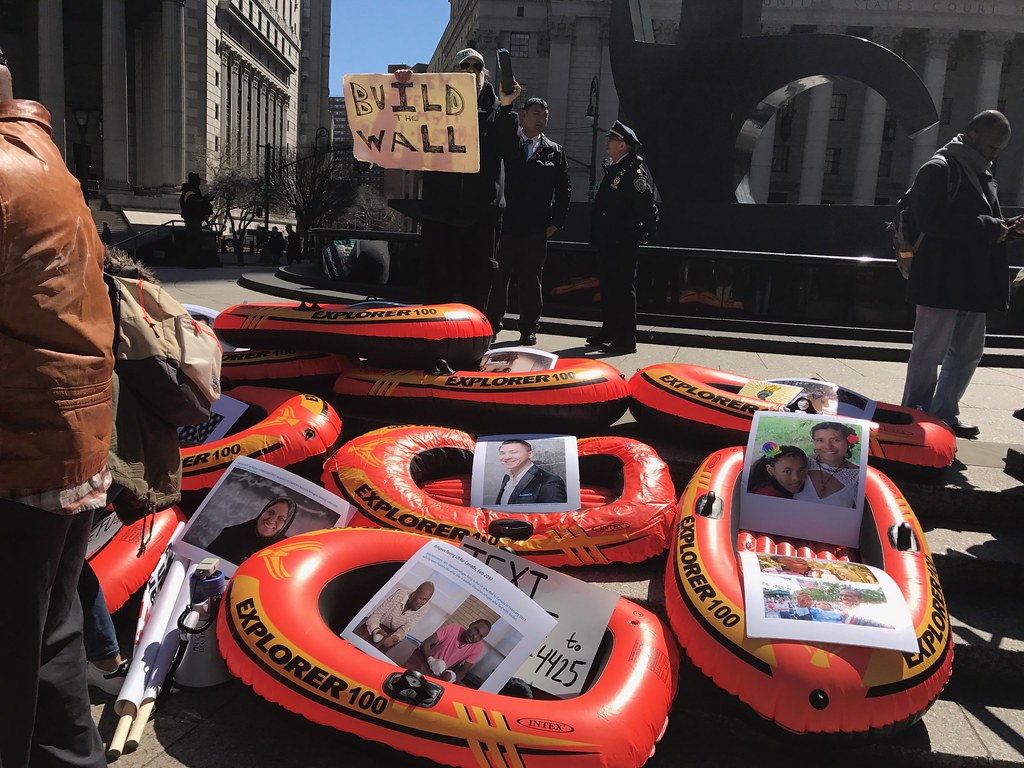 But now he wears a Trump hat and holds a Build the Wall sign, portable radio in hand, pacing back and forth during the speeches; chanting and singing LOUDLY (Kumbaya was his song of the day). 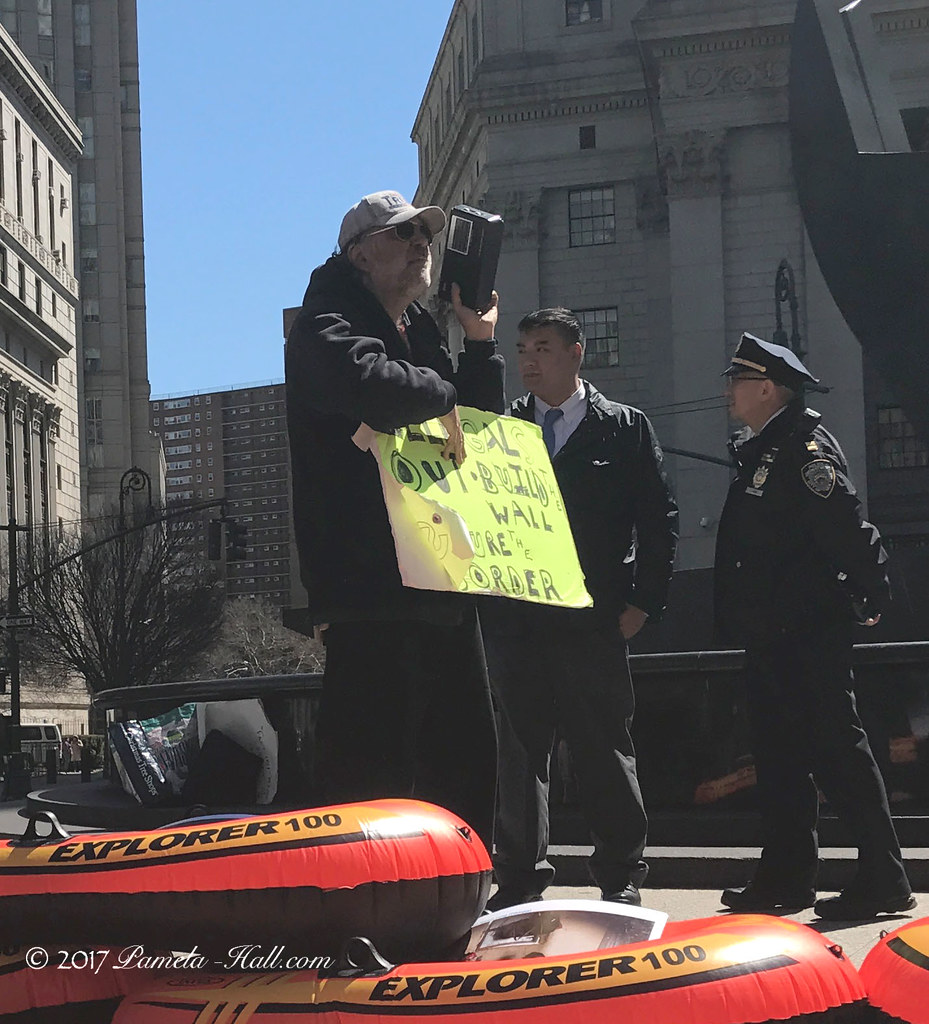 Crazy Gary from Staten Island is a “professional” heckler. May Day, a.k.a Commie Day, is a favorite of Gary’s. Every year he marches through Union Square giving grief to those who support Russian/ Soviet/Lenin-style Communism. Known to hurl profanities as he aggressively promotes his love for Red Chinese Communism. 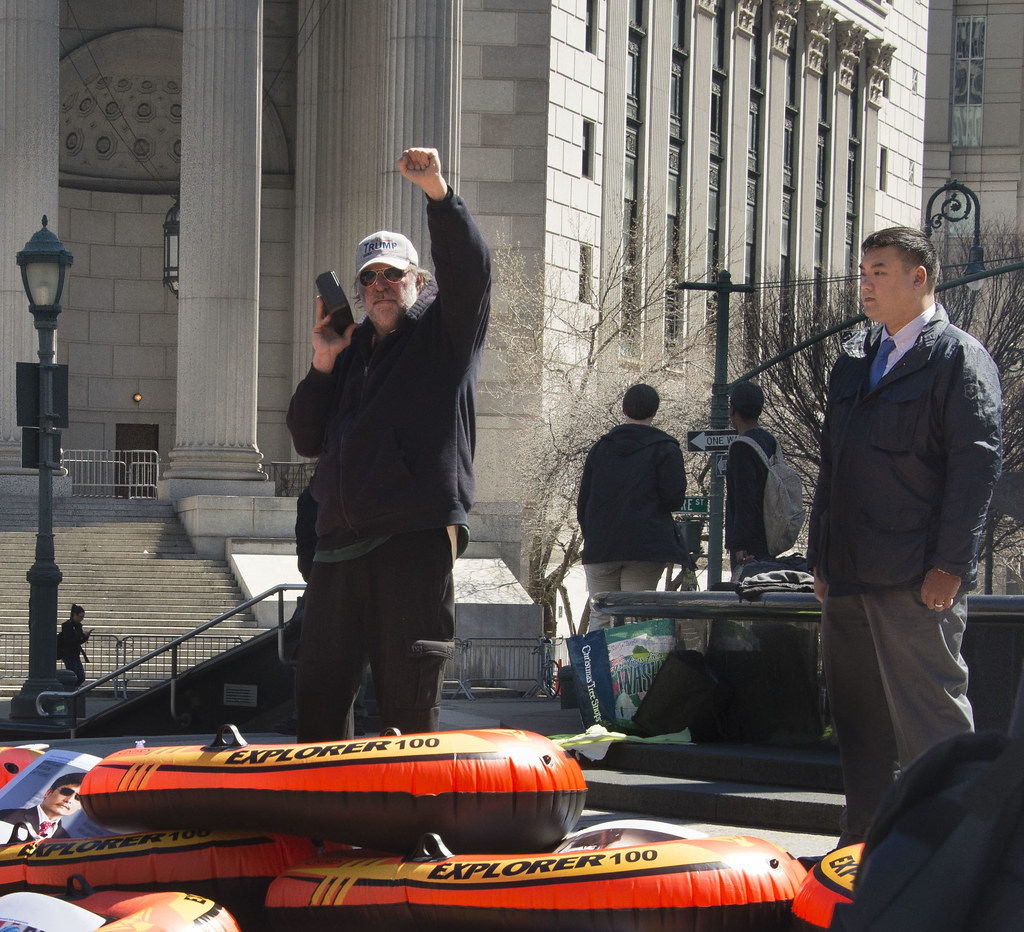 So, Gary sporting a Trump hat and carrying a Trump/Pence sign, as well as “Build the Wall“, begs the question from even the protestors on the LEFT, “WHAT is going on with Crazy Gary?”

He caused quite a bit of noise pollution for the intended speakers but the police took a tame approach to his presence. They tried to move him a few times, but he wasn’t breaking any laws, so Kumbaya droned on loudly through Foley Square. I must say, I had a bit of schadenfreude, watching the left be harassed by one of their own-Gary certainly isn’t one of ours.

As for the Refugee Action, today generated perhaps a smaller crowd. The African contingent was solid but minus the Korean faction. Rally points unchanged, the focus was still on (illegal) Immigrants. Sanctuary. Trump and Killer Cops, a.k.a. the NYPD.(Demoralizing the police being a huge campaign going on for DECADES.) We heard a few speeches with GARY chanting and Kumbaya-ing in the background. Union shills. African immigrants. And Hawa Bah, the mother of a Muslim immigrant, Mohamed Bah. She claims he was murdered by the NYPD on September 26, 2012.

Not much if any media present. Not my problem. Nor theirs. Act like the media is there. Recruitment rather than media impact is often the goal. One day. One protest. One new recruit at a time keeps the ranks of resistance and discontent roiling. A decades-old methodology. This entry was posted on April 10, 2017 at 2:17 AM and is filed under Analysis, News. You can follow any responses to this entry through the RSS 2.0 feed.