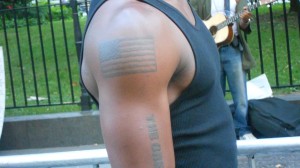 As I mentioned in my previous entry, I attended yesterday’s small, yet spirited, rally against the decision by the Board of Health-at Chairman Bloomberg’s urging-to prohibit the sale of sugary drinks above 16 ounces at restaurants and food carts throughout New York City. There were many civically-minded New Yorkers in the crowd-such as the man seen above-brought together by the capricious whims of our current mayor.

As you can see, the press was well represented, the ABC News reporter above being just one of many journalists eager to document an event that explores a number of important issues, e.g. class divisions, regulatory overreach, etc… The organizers of the rally no doubt attracted more coverage through the strategic deployment of creative graphics and clever slogans such as the fake Coca-Cola cup seen below, wielded by Staten Island libertarian activist Danny Panzella.

The reframing of a popular feminist trope used to defend abortion is particularly apt in this case, since Mayor Bloomberg has been one of the most vociferous defenders of abortion access-to the point of signing constitutionally dubious restrictions upon those exercising their 1st Amendment rights in opposition to abortion clinics-while seemingly taking the incongruous position that your caloric intake falls within the purview of municipal agencies.

The themes of freedom and individual choice were recurring elements throughout the day, expressed in several witty signs and placards.

Many of the demonstrators were anarcho-capitalists highlighting the deficiencies of man-made law that ostensibly relies upon the consent of the governed, but only in the most restrictive interpretation of that concept. The man below used the words of 19th century American philosopher Lysander Spooner to refute the pretensions of some conservatives and libertarians who claim that abiding by the Constitution will solve the Bloomberg problem, which ancaps believe is merely the manifestation of centuries of blind faith in an ideology that invests plenary civil and criminal authority in the hands of the state.

As I alluded to above, one of the attractions of this rally-at least, from the perspective of news media-was the innovative tactics organizers used in order to promote their belief in individual responsibility and autonomy. The sign below embodies some of this creativity, combining the image of one of this country’s founders with the immortal words of one of Mexico’s most popular lagers.

Several participants invoked the specter of the nanny state, which holds special resonance in a city governed by a man who seems to view his duty as micromanaging the personal lives of its 8 million inhabitants. A tendency that has not escaped the notice of consumer choice activists throughout the country.

One  demonstrator pointed out the joylessness of the eternal scold, inverting the slogan of an equally incompetent, pseudo-aristocratic liberal mayor from the 1970s.

Some protestors, of course, conveyed their message in a less indirect manner:

The speaker’s roster included a variety of activists from the liberty movement, including many of the individuals from Liberty HQ, which was responsible for planning the Million Gulp March. Zack Huff-seen below-delivered a brief overview of the goals of the protestors and the rationale for this demonstration.

Hamdan Azhar, a writer and statistician, used his platform to question the notion that addressing the “obesity epidemic” is the province of government bureaucrats. Asserting that freedom and health were not mutually incompatible concepts, he argued that Bloomberg’s crusade against large-sized, caffeinated soft drinks was merely another power grab intended to diminish the freedom exercised by citizens, not an altruistic attempt to make New Yorkers adopt a healthier lifestyle.

Audrey Silk, the founder and chief spokeswoman for NYC C.L.A.S.H., Citizens Lobbying Against Smoker Harassment, a grassroots organization created in order to resist a raft of anti-smoking restrictions introduced during the reign of Rudolph Giuliani and expanded by the Bloomberg administration, linked the fight for food choice to the battle for the rights of the besieged minority of smokers in this city-the first victims of the pettifogging bureaucracy that has now set its sights on junk food enthusiasts.

Dan O’Connor, a libertarian congressional candidate from Manhattan, discussed the stop-and-frisk policy that has elicited strong criticism recently, linking it with other perceived invasions of privacy and property-the most pivotal among them being the Kelo decision by the Supreme Court, which severely abridged the 4th Amendment to the Constitution. Like others on stage Monday, he asked rhetorically, “where are rights derived from?” Although a seemingly simple question, it illustrates a philosophical concept that is fundamental to how civilization is ordered. While some-such as Michael Bloomberg-believe that rights are granted through the instruments of the state-and therefore, can be revoked or abrogated by the same institutions-the individuals gathered for the Million Gulp March believe that they are innate and immutable, and can not be circumscribed or voided by government martinets.

My good friend Jeff Charles Goolsby was one of the featured speakers at this event. He used the opportunity to relate a personal anecdote of his extreme weight loss, which was accomplished solely through personal initiative, absent prodding from any city, state or federal bureaucrat assigned the task of monitoring the body mass index of American citizens.

City Councilman Dan Halloran-currently running for Congress against Grace Meng in the borough of Queens-was also in attendance, along with two campaign workers who doubled as visual aides. He excoriated the Bloomberg administration for ignoring vital city services, e.g. sanitation, parks, etc., while finding new ways to tax and regulate overburdened New Yorkers.

One of the highlights of the event-at least, from my perspective-was a stem-winder delivered by Ron Paul HQ leader Nick Spanos-seen below. In a slightly meandering, arguably insane, yet ineluctably compelling and persuasive defense of individual rights and free will, he blasted the power-hungry interloper from Massachusetts. His speech ranged from the sense of hopelessness and despair engendered by decades of collectivism in East Germany, to the historical and economic preconditions for the American Revolution, to an historically dubious yet unquestionably entertaining tale recounting the events which led to the writing of the Star Spangled Banner. Rising to the peroration of his speech, Spanos glanced in the direction of City Hall and exclaimed, “I’LL DRINK DRAINO OUT OF GASOLINE CAN IF I WANT,” expressing the dedication to independent decision-making all of the liberty activists in attendance undoubtedly felt that day.

Writer and blogger Todd Seavey reflected the sentiments of many with his witty spin on an iconic quote by 17th century French mathematician and philosopher Rene Descartes, although not the pro-Bloomberg leftist who accused a speaker of being in the pay of soda lobbyists during the first hour of the event.

The Million Gulp March wound down as Nicholas Fury III, a folksier, more freedom-enamored version of Larry the Cable Guy, gave a speech that touched upon many of the themes expounded upon by earlier speakers. His exhortation to reassert our rights as Americans went over well with the resilient few who remained at City Hall Park to see this event to its conclusion.

Tina Downer, a Ron Paul supporter and libertarian activist from Staten Island, delivered a brief but powerful indictment of the Bloomberg administration, which is simply a local manifestation of the sort of abuse of power that is being exercised at all levels of government.

The rally for food/drink freedom ended with a stirring rendition of the Star Spangled Banner. If only this generation of politicians had the same reverence for civil liberties and rights as James Madison, perhaps we wouldn’t need to tell government bureaucrats to get their grimy paws off of our big gulps.