The Case Against Legal Immigration 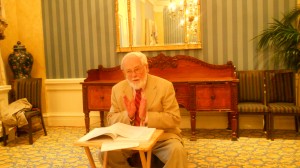 The issue of immigration-or even the mention of immigration enforcement-has been wholly neglected by the presumptive nominees of this country’s two major political parties. Even as prominent politicians find new ways in which to exploit ethnic divisions for the sake of political expediency, the perverse incentives of America’s federal immigration policies remain unaddressed. While Democrats seek to harvest what they expect to be a political windfall from Hispanic voters, Republicans pander, or hispander as some deem it, to what they view as an ascendent voting bloc, even going so far as introducing a bill eerily similar to one the GOP staked its reputation opposing during the final hours of a Democrat-controlled Congress.

That’s why the speech delivered by David North-seen above-at the Penn Club last month-the final one in this year’s lecture series sponsored by the Center for Immigration Studies-was such a welcome relief, especially for those of us who are looking for reliable, empirical data which illuminates the dimensions of the problem we’re facing. A former Labor Department official, Mr. North is currently an expert on legal migration patterns and processes for CIS. In that capacity he’s demonstrated just how immigration reforms enacted by Congress, from the 1965 Immigration and Nationality Act, to the mass amnesty of 1986 known as Simpson-Mazzoli, to the Immigration Act of 1990-which introduced the horrifying concept of the Visa Lottery-have irreparably altered the demographic future of the United States.

Although long on statistical analysis and number crunching, North’s speech was anything but dull, especially to those interested in how the mechanics of American immigration dovetail with the politics, which often seem inscrutable to people not immersed in this field. One of the most trenchant observations made during the course of his speech was an explanation of how the patterns of legal immigration have changed over the past several decades. Just over half of legal immigrants today get green cards as a result of Adjustment of Status, i.e. they are already in the United States when they become permanent legal residents. This marks a sea change in immigration policy, yet one that is barely scrutinized by the mainstream media, which seems intent upon intentionally misrepresenting the issues at stake, if they examine those issues at all. A good place to start is with the Immigration Yearbook, a compilation of statistical data examining foreign nationals who became legal residents, were newly naturalized, or applied for asylum during the previous fiscal year.

Although the data collected by the Department of Homeland Security is not comprehensive-the lack of any program monitoring the arrival and departure of non-citizens being one of its more glaring deficiencies-it is the most accurate portrayal of foreign nationals living in this country who are not part of the vast population of illegal aliens. One of the key insights you glean when looking at the population of legal immigrants in the United States is that most of them hail from a handful of nations. In fact, the top 10 feeder countries from which this country’s foreign-born population is drawn account for an exceptionally large percentage of America’s immigrant population, Mexico alone being the native country of close to thirty percent of immigrants. The reason for this is the 1965 Immigration and Nationality Act, which abolished the National Origins Formula which had governed American immigration policy since the 1920s, replacing it with a system of family reunification that has dramatically altered both the composition and size of America’s immigrant population.

Although Mr. North condemned the pre-’65 quota system-which included a blanket prohibition of Asian immigration-he did praise the Dillingham Commission, which devised the proscriptive formula, for devoting resources to answering questions that even today remain unexamined by the ostensible stewards of our federal government. Even so, North criticized the model which replaced our pre-existing immigration system-which had held legal immigration to a few hundred thousand people per year-for its agnosticism towards skills and reliance upon family reunification, independent of merit. He suggested that adopting skills-based preferences, a la Canada or the United Kingdom, would be a step in the direction of redressing the glaring deficiencies of our current immigration system.

However, there are flaws with adopting such a policy, beginning with the obvious reservation opponents would raise. Namely, that supporters of unfettered immigration would never consent to a corresponding restriction of unskilled immigration, a point illustrated in an article by Mark Krikorian during the last major congressional debate over amnesty legislation. Moreover, the notion that immigrants are required to fill job openings in STEM fields, although a popular one among open borders dogmatists, is belied by the facts.

Perhaps the greatest objection to adopting the system of either Canada or Australia though, is the realization that embracing foreign nationals who are technically skilled or highly educated does nothing to address the cultural consequences of immigration. One need only look at the wave of honor killings in Canada-or the United States-in order to grasp the essential truth that simply coming from an upwardly mobile, well educated demographic cohort does not necessarily mean that you are an assimilable or desirable immigrant. The retrograde customs and mores of a minority of some immigrant groups that might otherwise seem like attractive additions to the beautiful mosaic that is the United States are but one reason to look askance at anyone promising a panacea based upon a points-based system.

Even so, most people would agree that, all things being equal, seeking out immigrants on the basis of what they can contribute to the United States-rather than what we can give them-would be an improvement upon our current immigration policy. Although 68 year-old Peruvian retirees might very well be laudable individuals, the idea of resting a rapidly decaying welfare state upon their shoulders is utterly foolish. That’s why David North’s lecture was so instructive. It shed light upon just why and how our immigration policy had failed, and gave us some ideas for  how these problems might be rectified in the future.

If we ever do attempt to address this issue in a serious manner, I’m certain that it will be because of the work of people such as Mr. North and organizations such as the Center for Immigration Studies.

This entry was posted on June 11, 2012 at 8:42 PM and is filed under Analysis, News, News and Analysis. You can follow any responses to this entry through the RSS 2.0 feed.