The Heckler’s Veto (May Day Attack on NY ICE) 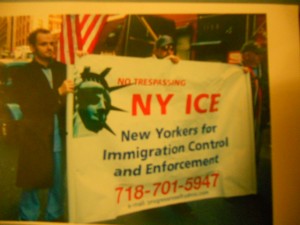 Update:  More great coverage of the May Day assault at The Silent Majority No More.

Here’s a followup from Joanna Marzullo, president of New Yorkers for Immigration Control and Enforcement, describing the events surrounding her assault at the hands of pro-illegal alien thugs during the May Day march to Foley Square. Unfortunately, the banner seen above is no more. However, the spirit of defiance it embodies lives on.

Joanna’s report after the jump.

I can barely keep up with my emails of encouragement that I have received from people throughout our country who have viewed the footage of NY ICE, which, at the point of filming, was down to just 3  members being mobbed by a pack of rabid bullies. For those of you who haven’t viewed the video, please view it and share with friends. Here is the link again, which I shot myself.  Here is a link from the spectator’s view, where you can see the NY ICers.

Of course, I am grateful to all the NY ICers who came out on May 1, 2012, but particularly grateful to the 2 men who stood with me as we were: spat upon, had water and water bottles thrown at us, had our banner destroyed and parceled out in pieces as “trophies”; endured the onslaught of vulgarity, sexism (to me, the only “b*tch” there); and anti-white racism. So, I won’t ever forget that and will be always grateful to you two, Jim and Daniel.

Our video has been posted in many places and is being widely viewed and spoken about. This is due, in no small part, to the efforts of “Urban Infidel”. Thank you, Urban Infidel.

Here are links from some of the coverage:

I appear about an half-hour into the Darby-Stranahan Show.

Here is coverage from Digger’s Realm.

As well as Urban Infidel.

And, of course, our good friends at the Ruthie Report.