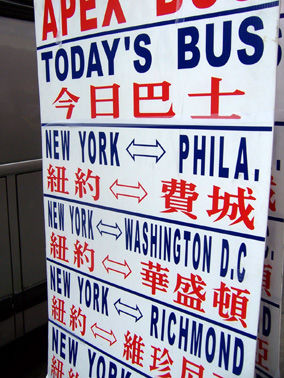 The New York Daily News reports on a disturbing scam to put unqualified drivers on the road. Philip and Pui Ng, through their company N&Y Professional Service Line, helped non-English speaking drivers cheat to pass the written test for a commercial driver’s license.  Using wireless cameras hidden in a test-taker’s jacket to see the test, the couple would feed the answers to the test-taker through a buzzer on the test-taker’s belt:

“I’ve helped people with the written test for more than 10 years,” Ng told the undercover before helping him nail a glowing 86 out of 95 questions on the exam.

According to court papers, the investigation found that potentially “hundreds of drivers” who couldn’t read or speak English were issued commercial licenses by the state of New York.

The drivers needed to pass a road test once they passed the written test and paid $12.50 for a commercial driving permit.

Included in that number was King Yiu Cheng, 37, who was driving north on Interstate 95 on May 31, 2011, when his bus crashed. Four people were killed and dozens injured in the wreck after Cheng fell asleep at the wheel.

American Rattlesnake is hopeful that someone will bring this episode to Los Angeles Police Chief Charlie Beck’s attention.  Chief Beck actually advocates  issuing driver’s licenses to illegal immigrants. This story illustrates just why that is such a wrongheaded policy, with potentially disastrous consequences for ordinary American citizens.

This entry was posted on March 2, 2012 at 2:49 PM and is filed under News, News and Analysis. You can follow any responses to this entry through the RSS 2.0 feed.