Disemployment And The Open Borders Agenda 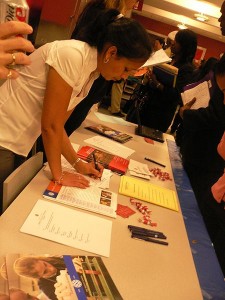 The proponents of the Gang of Eight amnesty repeatedly invoke the “labor shortage” allegedly afflicting the American economy. This, despite the  worst economic recovery in modern history and protracted underemployment and unemployment, to say nothing of persistent wage stagnation. By any metric you choose to analyze, millions of Americans are coming up on the short end of the stick, even those working in Silicon Valley, who we’ve been repeatedly assured do not exist.

However, all of the statistics in the world will not put a human face to the suffering experienced by Americans who are unable to find gainful, fulfilling employment. What makes this suffering tangible is the lines of jobless, yet experienced, job-seekers you see whenever a job fair is advertised, regardless of state, county, or city. Kudos to Numbers USA for illustrating the plight of the unemployed, which has been repeatedly ignored-when it’s not being ridiculed-by the mainstream media, self-serving politicians, and the venal special interests who belittle the pain of desperate American citizens.

This entry was posted on September 2, 2013 at 1:45 AM and is filed under News. You can follow any responses to this entry through the RSS 2.0 feed.