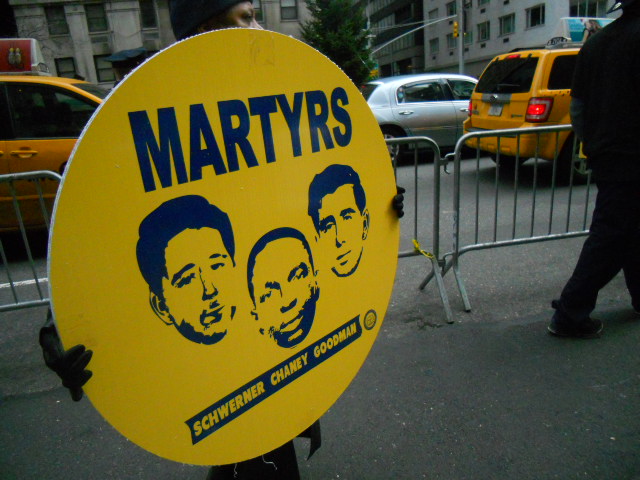 “Martyrs” — That was one of the many signs on display during an NAACP and SEIU-sponsored rally that took place this weekend  in opposition to David and Charles Koch, CEO and Executive Vice-President, respectively, of Koch Industries and universal left wing hobgoblins. The ostensible reason for the demonstration was the brothers’ contributions to the American Legislative Exchange Council, a coalition of conservative state legislators which has become an object of antipathy for liberal political activists at publications like The Nation and groups like Common Cause, People for the American Way, NAACP, and dozens of others-many of which were present at this anti-Koch rally on the Upper East Side of Manhattan.

For full coverage and many more pictures, read more after the jump.

This press conference/march intended to draw an analogy between the explicitly discriminatory laws in place in the American South during the Jim Crow era and what the left views as “racist” laws intended to verify the eligibility of voters casting ballots in national and local elections. Hence, the employment of symbolism hoping to evoke thoughts of the worst civil rights abuses of this nation’s past, including the murders of Congress of Racial Equality workers Schwerner, Goodman, and Chaney. One of the signs crafted with this purpose in mind used a photograph that came to symbolize the Memphis Sanitation Workers Strike.

One of the main themes the organizers of this demonstration emphasized was the alleged oppressiveness of voting ID requirements, which they repeatedly attempted to compare to discriminatory poll taxes levied against black citizens in large swathes of the American South prior to the enactment of the 24th Amendment to the Constitution.

Leaving aside the hyperbolic nature of this campaign, it’s not an especially convincing argument, especially since none of the voter identification laws-either proposed or enacted-would require voters to pay anything in order to obtain a proper ID, should they not already have one. Jay Nordlinger dissected some of the more spurious arguments posited in opposition to these laws in a National Review article published several years ago. Honestly, the opinions of skeptics in this regard don’t seem to be especially important to the organizations behind the anti-voter ID crusade, because the aim is to energize Democratic, left wing voters who view any such laws with absolute derision. So it shouldn’t have surprised anyone that local Democratic officeholders, such as ethics paragons John Liu  and Charles Rangel, were in attendance.

Also present was the current president of the New York State NAACP, Hazel Dukes. An opponent of charter schools and friend of the United Federation of Teachers-another enthusiastic backer of this event-Dukes is probably best remembered for her troubled tenure at the head of New York City’s Off-Track Betting, which was marked by corruption, racism and incompetence.

Apparently, none of that was enough to dissuade John Liu from giving Ms. Dukes a hearty embrace. I’m not sure if she used her pet name for Comptroller Liu, although the two share a troubling laxity with regard to overseeing their employees and abiding by seemingly prosaic ethical standards so they doubtless found many ripe topics for conversation.

One of the chief sponsors of this rally was Al Sharpton’s National Action Network, which sent one of its representatives to the rally. No one seemed to note the irony of a rally against “racist laws” being endorsed by an organization largely responsible for instigating the climate that led to the massacre at Freddy’s Fashion Mart. Apparently, the political power Sharpton wields within the Democratic Party today outweighs any concerns about his dubious past.

One of the fliers distributed at the press conference that preceded the march highlighted the states which had enacted some form of voter identification and verification. The speaker below tried to emphasize the purported threat to voting rights these laws presented to putatively disenfranchised minorities.

Anthony Romero, the Executive Director of the American Civil Liberties Union, tried to emphasize that this was not a “partisan” event, but in reality…

The impression of an Obama reelection pep rally was palpable.

Bob Edgar, the CEO of Common Cause-a left wing 501(c)3 which lobbies for unconstitutional things like McCain-Feingold-was another one of the featured speakers at Saturday’s press conference. The absurdity of an organization that opposes the First Amendment denouncing constitutionally protected things like lobbying for more rigorous voter ID laws was lost on most of the crowd.

Although there were very few Muslims that came to the anti-Koch rally, our old friend Talib Abdur-Rashid was given a prime speaking slot to denounce what perceives to be attacks on minority voting rights.

One of the largest contingents at the event-which attracted several hundred people-was formed by the United Federation of Teachers. The president of the UFT, Michael Mulgrew, gave a speech attempting to draw a parallel between the Occupy Wall Street Movement and events like this anti-Koch rally. Both share common goals-and until recently, lockers.

Although the signs are new:

There were also representatives of Hispanic advocacy groups, which shouldn’t be surprising considering the continued national discussion over how-or, if you’re the Obama administration, whether-to enforce immigration law.

The open borders lobby, although considerably smaller than the group of union activists and NAACP workers, was an eager participant in the subsequent march to the United Nations.

Our good friends from the Minkwon Center:

Something tells me that the sign below isn’t entirely accurate.

But perhaps the most ubiquitous presence at this rally was supporters of the NAACP. President and CEO Benjamin Jealous gave the standard speech, not markedly different from any of his colleagues.

For what it’s worth, the organization did do a competent job of organizing local affiliates of the national organization:

There was one seemingly valid argument to be found at this event, notwithstanding the reservations expressed above. The question of whether convicted felons should be stripped of the franchise in perpetuity-and what classes of felonies should be subject to this penalty-is a necessary debate, especially with the increasing growth of federal criminal penalties that attach themselves to crimes that were never before within the purview of the federal government. While most people would find the thought of Charles Manson or Mumia Abu-Jamal casting a ballot deeply troubling, to say the least, I doubt that there would be many objections to restoring the rights of individuals who have been rejoined society after committing a nonviolent offense many years before. However, that is a far cry from demanding that convicted criminals be reenfranchised en masse.

One of the main motifs of this march, and the movement in general, harkens back to the height of the Civil Rights Era in the 1960s. Because there are very few actual victims of laws intended to thwart voting by illegal aliens and felons-and the cause of allowing people prohibited from voting back into the electoral process is not nationally popular-using vivid images of iconic victims of civil rights violations is necessary. And although well-designed, they’re probably not persuasive to the extent hoped for by their creators. Then again, these signs are not necessarily aimed at convincing undecided voters but rather energizing those who already subscribe to this very dubious analogy.

Although those who were not at least had some knowledge of the aims of the civil rights movement and its leaders, such as Chief Counsel to the NAACP and Supreme Court Justice Thurgood Marshall.

However, there was still a sizable number of people there simply to voice their anger at the Koch brothers, attempting-with limited success-to tie this demonstration into the Occupy Wall Street movement.

As well as local struggles between organized labor and municipalities in other parts of the country:

Apparently this quip wasn’t self-evident. At least, to the person holding aloft a sign spelling out the Koch family name phonetically.

This entry was posted on December 12, 2011 at 3:13 PM and is filed under Analysis, News. You can follow any responses to this entry through the RSS 2.0 feed.

2 Responses to Voting Rights and Wrongs