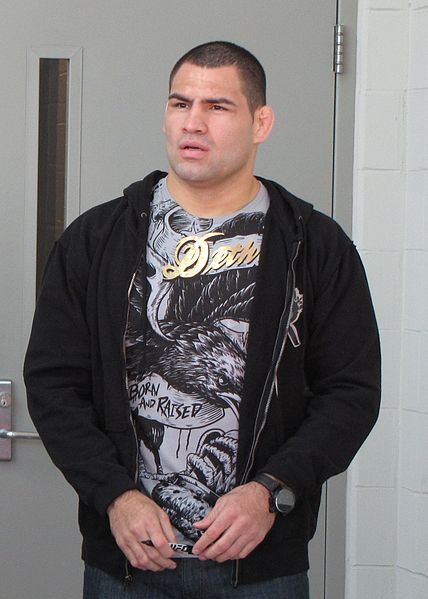 I normally wouldn’t devote an entire post to mixed martial arts, especially when there are such vital issues to discuss-including the Obama administration’s continued war against the State of Arizona. The sport doesn’t particularly appeal to me as a spectator, and I’m of the opinion that if I wanted to see men who didn’t know how to throw a punch properly, I’d watch boxing. However, I believe that an exception must be made for the much-anticipated UFC fight that will be broadcast by Fox Sports shortly. The reason being that this fight involves a fighter, Cain Velasquez, of Mexican heritage who I think embodies some of the more problematic aspects of this country’s immigration and acculturation policies with respect to Latinos.

Mr. Velasquez hails from Salinas, California, the birthplace of John Steinbeck, who immortalized his majestic, dry home in many of the 20th Century’s greatest novels. As this Fox News story points out, Velasquez takes great pride in his ethnic heritage, and exults in his ability to inspire other young boys who come from similar circumstances. Yet, I couldn’t help but note the discordance of someone who is a native Californian-a person from a state that’s been a part of the union for well over a century and a half-uttering these words:

“I’m proud to be Mexican, and if I can be a role model for some people, I’m happy to be that person. I’m glad I’m in this position.”

Now, I have no problem with someone displaying pride in his heritage. I certainly don’t take issue with Americans of Mexican descent or recently immigrated Mexicans expressing pride in an athlete whose family comes from Mexico. Just as Irish-Americans in the past rooted for Jack Dempsey, or those of Japanese extraction today cheer on MLB stars like Ichiro Suzuki, it’s to be expected that MMA fans whose parents or grandparents are Mexican would take an especial interest in the success of someone who looks and speaks like them. The fact that he serves as a source of inspiration for boys who might otherwise channel their aggression in unproductive, potentially illegal, avenues is something praiseworthy indeed. Yet the fact remains that Mr. Velasquez does not acknowledge-even in the form of a fleeting aside-the value of being raised in the United States, ostensibly his place of birth.

Perhaps this attitude of indifference is to be expected in a state where the distinction between illegal aliens and citizens has been blurred, if not erased altogether. Maybe it’s merely another sign that culturally we have recognized California as an extension of Mexico, effectively nullifying the Treaty of Guadalupe Hidalgo, just as some public schools seem to have acknowledged. As our past coverage of Mexican sporting events hosted in the Golden State makes clear, the United States can no longer play a friendly on home soil. But I can’t help but asking, just as Adam Carolla did in a subtly perspicacious scene in his film The Hammer, why Cain Velasquez is so proud of a country that his parents abandoned, yet so utterly dismissive of the country where he and his family have prospered beyond the wildest dreams of most Mexican nationals.

It’s a question that you might want to ask yourself as you watch him compete tonight against underdog Junior Dos Santos, who has no problem expressing pride in his country.

This entry was posted on November 12, 2011 at 7:43 PM and is filed under Analysis, News. You can follow any responses to this entry through the RSS 2.0 feed.