South Park is an absurd and profane comedy series, but it has a knack for exposing the underlying truths behind social issues.  The latest episode of South Park,  ”The Last of the Meheecans“, tackles the problem of illegal immigration, and gets a lot of it right .   Liberals claiming to care for the well-being of Mexican illegals are just looking for cheap labour.  As the US economy falters, Mexicans are better off back in their own country with their friends and family, in a country where they understand the language and culture.  The notion of Mexicans voluntarily returning to Mexico sounds absurd, but it is, in fact, a reality.  As American Rattlesnake has previously noted, net US/Mexican immigration is now stagnant – as many Mexicans are leaving the US as are coming in.

Perhaps it takes a cartoon of foul-mouthed fourth graders to help us see the light.  Illegal immigration is as bad for Mexico as it is for the United States.

Online access to episodes of  South Park is limited.  ”The Last of the Meheecans” will be viewable online for a short time after the original October 12th air date, but after that you’ll have to wait a month before it is again available online. 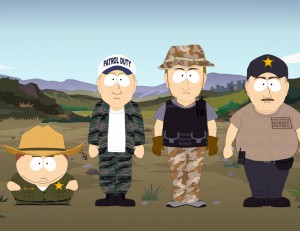 This entry was posted on October 13, 2011 at 12:12 PM and is filed under Analysis, News. You can follow any responses to this entry through the RSS 2.0 feed.

3 Responses to South Park Does Mexico