Secure Communities and the Way Forward 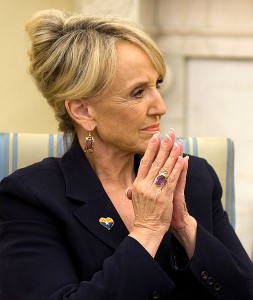 As President Obama follows through on his earlier promises of amnesty by fiat, the Internet is swirling with speculation as to motives, consequences, and potential political fallout. I had an interesting exchange on Twitter yesterday that touched upon these issues indirectly when a follower confidently averred that the administration’s earlier decision to impose Secure Communities upon state and local governments would moot any broader discussion of amnesty, as illegal aliens living throughout affected jurisdictions came into the orbit of ICE. Unfortunately, despite assertions by John Morton in the past, I don’t believe the Obama adminstration has any intention of following through on this plan, especially in light of the President’s propensity to proffer the politically expedient lie when it suits his purposes.

With Democratic governors from the states of Massachusetts, Illinois, and The Empire State all refusing to abide by the law-following in the footsteps of President Obama’s own Secretary of Homeland Security, it should be noted-and a politically revitalized coalition of Hispanic advocacy organizations and open borders advocates, led by honorary Mexican Consul General Luis Gutierrez, the notion that President Obama isn’t going to abandon all immigration enforcement strains credulity. Secure Communities isn’t even the most effective tool for federal-local collaboration when it comes to immigration enforcement, as this website has pointed out in the past, yet rest assured that it too will be jettisoned, especially as November 2012 rapidly approaches and Obama’s standing among the radical left, i.e. “progressives,” becomes essential to his reelection. The ecstatic mood among this particular voting bloc is evident to anyone who has visited the Daily Kos within the past week.

As I delineated in my earlier post on this subject, the main theme that needs to be stressed now is what can be done to combat the Obama amnesty. Unfortunately, aside from the characteristically courageous statement issued by Arizona Governor Jan Brewer, Republican elected officials have been almost completely AWOL in the days since President Obama and his underlings decided to stop enforcing immigration laws against anyone who isn’t an ultra-violent. Whether that will change in the days ahead is an open question, but I haven’t been encouraged by the anemic response from most Republican talking heads, particularly our presidential candidates, to an executive decision that flouts separation of powers and makes a mockery of congressional authority.

One of the Republican front-runners who’s been exceptional, insofar as that superlative can be attached to any of these candidates, in this regard is Minnesota congresswoman Michelle Bachmann. Although she has yet to come out with a forceful denunciation of Obama’s administrative amnesty, as of yesterday, at least, she has been a consistent supporter of immigration enforcement. This part of her legislative and public record has been repeatedly documented and has been reaffirmed by the congresswoman herself in recent days. The only other (major)  presidential aspirant-and I must add the caveat that she has yet to declare her candidacy-who has a comparable record is former John McCain running-mate Sarah Palin. The former governor of Alaska has consistently and vehemently defended defended SB 1070, as well as Governor Jan Brewer.

I am not endorsing the candidacy of either woman, but suggesting that the philosophy they’ve espoused is where anyone seriously vying for the Republican presidential nomination should begin. The insipid open borders pandering of John Huntsman, the deceitful charade of Rick Perry, and the sophistry of pseudo-intellectual Newt Gingrich can not substitute for a consistent, sincere commitment to tougher border security, robust internal enforcement, sensible immigration restrictions, and implacable opposition to amnesty, especially the patently unconstitutional, extralegal form of amnesty that President Obama’s flunkies have foisted upon an embattled, denigrated American public.

The person who ultimately wins the GOP nod, in other words, should emulate the example of the brave woman whose photograph you see above. Yes, that person should be able to articulate this viewpoint in a manner befitting the circumstances of  his or her campaign, but the determination and the underlying message-at least as far as the subject of immigration is concerned-should be consonant with the principles enunciated by Governor Brewer and this website for the past year. Allowing President Obama to skate on this issue is not only a politically disastrous prescription-which will embolden an open borders left already flush with victory while simultaneously bolstering Barack Obama’s flagging reelection campaign-but one that is ruinous to America as a society. That’s the message that needs to be drilled into the heads of Republican office-seekers who want to lead this nation.

This entry was posted on August 23, 2011 at 1:51 AM and is filed under Analysis, News. You can follow any responses to this entry through the RSS 2.0 feed.