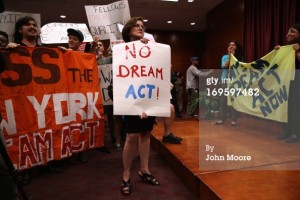 The photo above represents a NY ICE member who attended this event, who, despite being outnumbered, refuses to be intimidated and stands up against the attempt of illegal alien students to access college financial aid, which has the misleading acronym of DREAM.

This video will show how some of New York’s politicians, in particular, Comptroller  ThomasDiNapoli, have sold out legal New Yorkers in favor of these trespassers, and, who, in the topsy-turvy logic that these traitorous politicians typically exude, tries to act like he is the one who has “manners”.
Manners?!  Since you, DiNapoli, disregard our sovereignty, your crime goes far beyond the problem of your manners. DiNapoli, you act as if you are performing, an unfunny stand-up comedy routine designed for people who can’t think for themselves, and do not know this Issue. Those who know this issue know there is a process to coming to the U.S. the legal way. A process which you ignore and distort as you pretend that illegal alien trespassers are the same as legal immigrants, who go through this process to come to our country.
The fact of this issue is that illegal alien college students already have access to college, and, in fact, are already there, but they want access to financial aid. They want U.S. to pay for it. They want the money.  And, they will be wrongfully competing with Americans and legal immigrants to get that financial aid if the DREAM amnesty passes.
Illegal alien college students also are trying to co-opt the legacy of Martin Luther King Jr. and the Civil Rights Movement by calling their amnesty the “DREAM.” King was never fighting for illegal aliens, and is probably rolling in his grave at how his legacy is being used.
Not that these illegal alien college students care.  It’s all about lying, and saying whatever they think they need to say, to get what they want:
The U.S.’s Resources.