Stapling A Pink Slip To Every American’s Birth Certificate 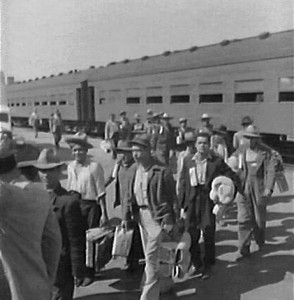 The Republican Party platform-which, those of you with some time on your hands, can view here-is, like most collectively assembled group mission statements, an unwieldy document. However, the stance its drafters have taken on immigration should be noted, if for no other reason than to acknowledge how the GOP’s most influential power-brokers view one of the defining issues of our time.

The New York Times has gone to the trouble of describing one of the more important aspects of the Republican Party’s immigration plank. To wit, its endorsement of a massive guest worker program, which harkens back to one of Mitt Romney’s most infamous statements regarding foreign-born STEM graduates. Steve Sailer has gone to the trouble of explaining why  this portion of the platform is so inimical to the interests of American job-seekers but beneficial to the people who want to displace them.

For those of you who have never seen Edward R. Murrow’s Harvest of Shame, an indictment of the conditions experienced by migrant farmers in modern America, you can view the documentary in its entirety by accessing this Youtube link.  It’s particularly resonant at this point in our country’s history, when so many Americans are struggling to maintain roof over their heads and support their families.

This entry was posted on August 31, 2012 at 11:50 AM and is filed under News and Analysis. You can follow any responses to this entry through the RSS 2.0 feed.