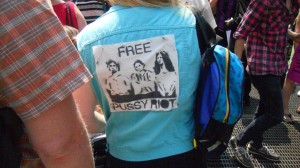 The conviction of and two year prison sentence leveled against anti-clerical, anti-authoritarian riot grrl punk-rock band Pussy Riot should not have come as a surprise to those who have been following the periodic show trials initiated by the Putin regime in order to quell swelling domestic discontent and internal protests. In spite of the inevitability of this verdict, dozens of sympathizers and rock enthusiasts-such as the person seen above-decided to show up in Times Square for yesterday’s Global Day Of Action, which was intended to demonstrate solidarity with the three women prosecuted for standing up to Vladimir Putin and his friends in the etiolated, yet politically connected, Russian Orthodox Church.

Although most were there to show their support for Russia’s most famous political dissidents at the moment, the fact that the rally took place in the center of one of the globe’s chief tourist destinations-and a hub for national and global media-meant that there were many others who came to either enjoy or participate in the spectacle that is New York City in the middle of the dog days of Summer. As you can see from the picture below, one of the hangers-on was this city’s most epic troll, a man with whom readers are very familiar.

In addition to denouncing American opposition to Bashar al-Assad and praising Vladimir Putin, he also accused those gathered in Times Square of taking part in a CIA-sponsored disinformation campaign. Surprisingly, he wasn’t the only communist in attendance, as the pamphlets promoting Revolutionary Communist/cult leader Bob Avakian demonstrated. Unaffiliated with either man, yet also participating in this impromptu speaker’s corner, was a pro-abortion, anti-pornography activist festooned in neon stickers.

And since it was the anniversary of Elvis Presley’s death, we were treated to an Elvis Presley impersonator. As Cindy Adams is wont to say, only in New York…

Notwithstanding the ubiquitous tourists and perennial trolls, most of those in attendance were there to protest the persecution of Russian artists and political dissidents. As in demonstrations throughout the world, the balaclavas which have become the hallmark of this newly famous punk rock band were sported by many protesters.

As was the less common business attire.

Even children got into the act.

Of course, some people shunned anonymity.

One demonstrator played upon the musicians’ trademark apparel by alluding to the opaque nature of the Putin regime.

One of the chief criticisms voiced at the rally was aimed at the symbiotic-bordering on incestuous-relationship between the ruling party in Russia-particularly President Vladimir Putin and Prime Minister Dmitry Medvedev-and the Russian Orthodox Church, led by autocratic patriarch Kirill I. This is perhaps one of the most interesting aspects of the pro-Pussy Riot actions-at least, from the perspective of a believing Christian who disdains organized religion as it stands today-because it illustrates the corruption of contemporary religious institutions such as the ROC, which, at least since its rapprochement with Joseph Stalin, has served as an unofficial auxiliary of the Russian state.

It was a bit harder to discern a coherent political narrative behind yesterday’s event, beyond generic support for freedom of expression.

And the ineluctable observation that Putin sucks:

The politics expressed during the rally ran the gamut from anarcho-syndicalism-as seen below:

To support for Mitt Romney’s presidential campaign, which might or might not have something to do with his persistent critiques of the Russian government on the campaign trail.

There were also, if the t-shirt seen below is any indication, many feminists among the crowd.

Malleus Maleficarum is, for those unaware, a document created by German priests-who served as inquisitors for the Roman Catholic Church in the 15th century-which attempted to demonstrate that witchcraft does in fact exist and described, in precise detail, how it should be combated. The witches, in this case, are Maria Alyokhina, Yekaterina Samutsevich, and Nadezhda Tolokonnikova. Presumably, the resources invested in flattening a seemingly inconsequential protest against Putin’s authority signify the willingness of his regime to drown witches who pose a more direct threat to his rule.

The rally concluded with a throng of demonstrators crossing into Father Duffy Square and climbing atop the TKTS bleacher in order to convey their message to a slightly larger audience.

And deliver an acoustic set in Russian.

Although I enjoyed the brief, yet impassioned, speech given by the Russian émigré extolling the benefits of living in a country where freedom of speech is enshrined in the Constitution, the herp derp call and response fashion in which it was delivered, via Occupy Wall Street’s patented mic check, was not the smoothest way to convey what would otherwise be an emotionally powerful message.

That said, I thought the pro-Pussy Riot Times Square rally was newsworthy, and-to the extent that those heretofore ignorant of the current persecution of dissident artists and journalists within Russia were aware of it-effective in spreading information about an important instance of individuals defying the state. As the makeshift banner above states, we are all hooligans, especially when speech is criminalized.

You can read the closing statements of the defendants here.

This entry was posted on August 18, 2012 at 2:17 AM and is filed under Analysis, News, News and Analysis. You can follow any responses to this entry through the RSS 2.0 feed.