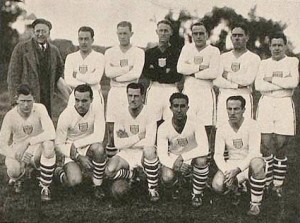 I know that most of you are probably extremely frustrated by recent events, especially yesterday’s initiation of DACA, the patently illegal subversion of the constitution by this administration in pursuit of  retaining its unchecked executive power. It is an election year, after all.

That’s why I thought I’d bring you some slightly more cheerful news.  America’s historic victory over our the nation which will undoubtedly be the chief beneficiary of President Obama’s unconstitutional administrative amnesty in yesterday afternoon’s soccer match at Aztec Stadium is a milestone in the game of soccer. Although  America has endured the vitriol of its enemies during previous soccer matches, the hostile conditions opposing teams endure while playing in Mexico City are legendary. The fact that the  United States soccer team was able to overcome them for the first time in its history-due in no small part to the unparalleled play of star goalkeeper Tim Howard-and defeat a team that had just won the gold medal in the Summer Olympics, is cause for celebration.

Whether you’re an avid soccer fan-which, I confess, I am not-or simply a fan of American sportsmanship, last night’s victory is worth cheering. Go, Sam’s Army!