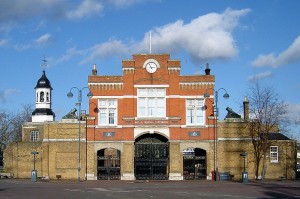 Once again, the words of Enoch Powell appear prescient, although perhaps in not quite the way the late British parliamentarian and classicist intended. In the same week that Swedes have been besieged by aggrieved jihadists imported by their own government, Londoners experienced yet another subsidiary benefit of multiculturalism. This time, in the form of a Nigerian convert to Islam ritualistically slaughtering a member of the British Army.

Drummer Lee Rigby, of the 2nd Battalion of the Royal Regiment of Fusiliers, was methodically  dismembered by an adherent to the Religion of Peace as he walked to his barracks yesterday. The loving father, who had served in Afghanistan, was the latest victim of an alien ideology which has already killed or attempted to kill hundreds, if not thousands, of Britons on their own soil. The perpetrators of this particular atrocity-which echoed an earlier attempt to murder and behead a British soldier in the streets of London-were emulating their countrymen in Nigeria, where Boko Haram, which in Hausa translates to “Western education is a sin,”has turned the northern portion of the country into a charnel house, slaughtering Christians,  security forces, women, and anyone else who does not submit to the imperatives of sharia. The Nigerian government has responded ambiguously, besieging three northern states even as it releases detained members of the ultra-violent, Islamic terror network.

How the UK will respond to this atrocity remains to be seen, although the signals emanating from the ruling class-which is in large measure culpable for this sort of barbarity-are not encouraging. The widely ridiculed British security apparatus responded with undue alacrity. The ahistorical, insipid pabulum put forward by the current empty suit occupying 10 Downing Street was to be expected. Mr. Cameron was simply following the example of our President, who won’t let  the premeditated vivisection of a British citizen sully the good name of Islam. Better not to mention it at all. Of course, most of the large media organs-with a few notable exceptions-sedulously elided the unpleasant fact that these Muslim youths grounded their butchery in Koranic injunctions. The current mayor of London, who once distinguished himself from his Islamophile predecessor, “Red” Ken Livingstone, issued a similar appeal to his constituents not to form a hasty, negative opinion of the perpetrator’s religion simply because of the actions of a few misguided Muslim jihadists who had just assassinated an infidel in the name of Islam.

After all, this is just an isolated incident, most likely the work of a lone wolf-or wolves-which won’t be repeated in the future. It’s not like London is the European hub for pan-Islamic, jihadist terror,  to the point of earning its own delightful sobriquet reflecting the dramatically altered demographics of this international capital of commerce. Despite the feigned expressions of shock and disbelief by the usual suspects, the biography of the soldier of allah seen in video footage is anything but surprising. A follower of the protean jihadist movement known as Al-Muhajiroun, which serves as a finishing school of sorts for would-be Islamic terrorists, he spent recent months exhorting his fellow Muslims to join the Syrian jihad, which I’m sure would have met with the approval of Secretary of State Kerry and much of Congress.

Although we don’t know what precipitated his conversion to Islam, the opportunities presented to him in this new England are ubiquitous. In addition to numerous mosques-both of the mega and storefront variety-Islamic bookshops whose offerings range from Mein Kampf to The Protocols of the Elders of Zion; there is the Islamic community itself, where anti-Semitism and hatred of the West proliferates, at least according to British Muslims. There are even committed jihadists willing to instruct young pupils in the tenets of Islam. That is why the words of Cameron, Johnson, and the worse than useless talking heads in the media ring so hollow today.

The message sent by this jihadist’s ostensible mentor, Anjem Choudary, reveals more than any of the lies or willful delusions being promoted by the usual suspects. His testimony to the character of the bestial creature who disemboweled Lee Rigby is illuminating in its own warped way. Islam is a peaceful religion, and Muslims are without sin, because submission is peace and killing infidels is not sinful. According to this belief system, what took place yesterday is commendable and should be emulated, just as the deeds of Mohammed-the model for all proper conduct and behavior-should serve as a model for true Muslims.

In some respects, the philosophy of apocalyptic, jihadist Islam is in perfect harmony with that espoused by the unreconstructed, revolutionary left, which has aided its rise throughout the West. Both are governed by situational ethics, where the ends-if achieved-are justified by the means. Specific actions are judged to be right only insofar as they facilitate a certain outcome. The growth of Islam and sharia in the case of the former, the ideal collectivist state for the latter. Both buttress each other, but the foundation stone is the left, which has constructed the meta-narrative that there are no reasons to oppose mass immigration from the third world-or the customs and beliefs these newcomers hew to-which aren’t invidious and racist in origin, and that the thoughts and feelings of the majority of Europeans and Americans constitute a form of mass psychosis.

That is why western European cities are being sacked for the first time since the end of World War II, and why the president will not even utter the name of the religion which is responsible for the atrocity committed yesterday in Woolwich. If diversity is our strength, then any action-or even statement-which might diminish public support for this grand experiment of our political leadership is forbidden; or “haram,” if you will. The loving, caring family of Lee Rigby is experiencing a torment that defies description, yet the government of Great Britain refuses to look reality in the eye and identify the killer by its rightful name. In this respect, there is some truth to the words of the orc who murdered and desecrated the body of that courageous serviceman. David Cameron and Boris Johnson-Labour, the Tories, and the Liberal Democrats-do not care about English people.

That much is obvious.

This entry was posted on May 23, 2013 at 8:02 PM and is filed under Analysis, News, News and Analysis. You can follow any responses to this entry through the RSS 2.0 feed.