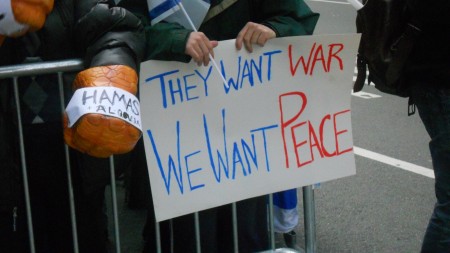 One of the chief distinctions between the anti-Israel rally and the slightly smaller, yet equally exuberant, pro-Israel counter-demonstration held in Times Square this weekend was the sentiments expressed by the participants. While the former vocalized their antipathy towards Israel and the United States and demanded ordinary Israelis be punished-through measures such as the BDS movement-and spent most of their time anathematizing Jews in the most historically inaccurate way possible, the latter concentrated mostly upon messages of solidarity with Israel.

There were, of course, expressions of hostility towards the jihadists who have instigated the current wave of bloodshed, and who continued to barrage terrified Israeli civilians with Iranian-designed missiles even as this was being written.

However, I saw no generalized contempt for the Palestinian people, or even the bellicose Islamist leaders of neighboring countries who exhorted those currently entrusted with power in the Gaza Strip to stand their ground.

The overwhelming sentiment was one of resilience, not hatred, and was expressed through chants like “Am Yisrael Chai,” the people of Israel live, and the singing of the Hatikvah, the national anthem of Israel.

As well as an attempt to convey, in concrete terms, the intensity of the terror ordinary civilians, especially those living in southern Israel, experience on a daily basis.

And to connect the coercive violence aimed at Israel to the jihadist attacks carried out against similar Western nations throughout the globe.

Specifically, the United States, which has endured jihadist attacks for the past several decades, including lethal assaults initiated by the men currently in charge of the Palestinian Authority and the Gaza Strip.

Needless to say, there are legitimate critiques to be made of the methods Israel employed in responding to the rocket war waged by Hamas, as well as unaffiliated jihadist and Palestinian gangs. If nothing else, the fact that Hamas has been able to enchance its growing diplomatic standing in the Middle East-while preserving its vast, Iranian-supplied weapons arsenal-and was able to deter Israel from a ground invasion bodes ill for the security of Israeli citizens, to say nothing of those Palestinians who will be the unfortunate human shields in future military engagements.

Whether or not the result of this conflict constitutes a victory for Hamas, it is clear to all but the most deluded observers that it is a defeat for the adversaries of Hamas. Rather than Thing, a.k.a. Ben Grimm, Israel reacted to this assault in the dithering, indecisive manner of Shakespeare’s tragic hero, Hamlet. And as we all know, this strategy, if it can be called that, only leads to more bloodshed in the future.

Perhaps most disconcertingly, the inhumanity and barbarity of Islamic law was papered over by the persistently hostile mass media which reported on the Gaza conflict.

As these images from the public execution and dismemberment of suspected “collaborators,” which has drawn remarkably little attention from the fifth estate-with some notable exceptions-demonstrate.

Unfortunately, I don’t think the collective expression of support for Israel we’ve witnessed in New York City, whether from ordinary citizens or self-interested pols, is going to have much of an impact on public discourse. The sad truth is that the dominant media narrative, i.e. Palestinians as perpetual victim and Israel as eternal aggressor, is going to remain in place for the foreseeable future, and not even the most well crafted, factually accurate  publicity campaign is going to alter the status quo.

In fact, it could be argued that the appeal of the formulaic, anti-Israel meta narrative will only grow as those sympathetic to the Islamist cause gain an even surer foothold in the corporate world, within Congress and among influential media organs. The only way to counter this cresting tide is, to paraphrase the great Franz Kafka, take an axe to the frozen sea inside of us. Or in this case, the ice inside of those who willfully ignore the truth before them.

The truth, like life, is not pretty, but it must be told. Israel, like most of the West,  faces an existential struggle. Its preservation does not hinge upon a slick media relations campaign, or a superficially persuasive viral video, but upon disabusing spectators of the fallacies that underlie much of received wisdom about this conflict. And the only way to accomplish that goal is by telling the truth about jihadist dogma and how it informs the actions of  organizations like Hamas.

This entry was posted on November 23, 2012 at 8:36 PM and is filed under Analysis, News, News and Analysis. You can follow any responses to this entry through the RSS 2.0 feed.

One Response to Manufactured Reality