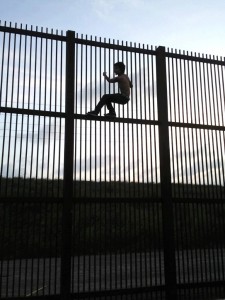 The Obama reelection campaign has begun in earnest with the announcement yesterday that the administration will henceforth be ignoring the expressed will of Congress, its Constitutional obligations, and the desires of the American public. In a move that President Obama’s functionaries have been telegraphing for months, and which was made official yesterday, the White House has announced that it will be “reviewing” the cases of individuals who are in the process of deportation, or who are subject to deportation, in what is effectively a sweeping amnesty for nearly all illegal aliens currently residing in this country. The Wall Street Journal has a brief summary of who is now eligible for the amnesty jackpot, including a description of the aforementioned Morton memo, but a better question is, “who isn’t eligible?”

Although much of the media is framing the issue as one of the admistration implementing the DREAM Act that an anti-immigrant faction of Congress was loathe to enact, the truth is that this decision is much broader  and encompasses more than simply potential DREAM recipients, which as Hans von Spakovsky points out on the Heritage Blog is itself a blatantly unconstitutional act. Nearly every illegal alien who falls within one of the amorphous, Morton-defined categories will be given the opportunity to remain in this country indefinitely, and the “criminals” whom the Department of Homeland Security and BICE will allegedly be honing its sites on are not defined. Presumably, the unlucky aliens will not include petty, inconsequential criminals such as car thieves.

There are a number of conclusions to be drawn from the Obama amnesty, but for the time being I’d like to focus on the most overlooked but ineluctable one. Namely, the breathtaking effectiveness of the open borders lobby. Despite the fact  it does not represent American voters-the overwhelming majority of whom support tougher immigration enforcement-it was able to lobby, protest, and hector Barack Obama into adopting its stance of complete non-enforcement of this nation’s immigration laws. As puerile as some of its tactics might have struck us, the fact is that they campaigned for the Obama administration to flout the law and implement amnesty from the moment the DREAM Act failed to gain cloture during the last lame duck session of Congress. While patriotic, pro-enforcement activists concentrated on taking  proactive measures in Congress and in the states, the open borders dogmatists devoted most of their resources to convincing the Obama administration to defy Congress and simply ignore the law. Although they were pushing against an open door-one guarded by people like Janet Napolitano, La Raza’s Cecilia Munoz, and John Morton-don’t discount the influence they exerted upon the White Hosue’s decision-making process. The sustained action of our enemies, combined with flagging support for the President among Hispanic voters, is how we came to this pass.

Now we have to figure out what can be done to mitigate the situation we now find ourselves enmeshed in. The best long term solution, obviously, is thwarting President Obama’s reelection. Ideally, the new president would not only subscribe to the beliefs espoused by websites such as this, but also believe in limitations on executive powers and the constitutional separation of powers that Barack Obama has so brazenly defied this week. In other words, we need a presidential candidate who is willing to uphold his or her oath of office. However, this solution does nothing to ameliorate the situation at hand, or prevent the wholesale abandonment of immigration laws that will, barring a miracle, remain the status quo for the next year and a half. That’s why I’m posting a link to Stand with Arizona’s website, which provides some useful links and helpful suggestions for how you can combat this latest outrageous decision by Team Obama.

As Governor Jan Brewer pointed out in her statement condemning the White House’s extraconstitutional action, President Obama lied when he told his friends at the National Council of La Raza that he would not bypass Congress in order to enact amnesty by executive order. Even if we can’t do much to obstruct the decisions made by an administration intent on foisting amnesty upon an hostile American public, we can begin to regain the momentum that was pivotal in preventing Congress from implementing this plan legislatively last year. Although we now have an essentially lawless administration beholden to anti-American special interest groups like La Raza, we still have power as individual citizens, which is something the gang at 1600 Pennsylvania Avenue can not change through administrative diktat.

This entry was posted on August 19, 2011 at 8:38 PM and is filed under Analysis, News. You can follow any responses to this entry through the RSS 2.0 feed.

One Response to Above The Law?