The Immigrant Experience in America 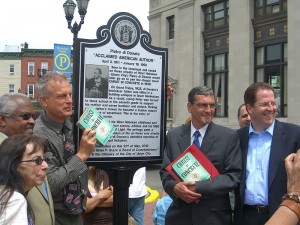 Documenting the lives of immigrants is an enduring aspect of American literature, which befits a nation that has been shaped to such a large extent by successive waves of migration from distant lands. One of the most important novels published in the first half of the 20th century, Christ in Concrete, was written by the son of Italian immigrants who sought to portray the plight of his community by fictionalizing the story of his and his parents’ lives.

The book’s protagonist, Paul, is loosely modeled on Pietro Donato, whose father was crushed to death as he was working on a construction site. In the novel, Paul is compelled to curtail his education and become an apprentice brick layer at the callow age of 12 in order to support his large, Italian-American family. The figure of Paul’s deceased father Geremio casts a pall over the entire work, especially after the death of his caretaker/godfather, a man by the name of Nazone, who serves as both a mentor and protege of Paul as the novel progresses.

While Christ in Concrete revolves around the daily struggles of these Italian immigrants, as well as a Russian-Jewish family that Paul develops a friendship with over time, and the ethnic community in which they reside, the focus of the author seems to encompass a much broader, almost universal critique of what he viewed as the inherent deficiencies of both American capitalism and the Roman Catholic Church. In fact, this novel is replete with religious imagery and symbolism. From the protagonist-who’s the namesake of Paul the Apostle-to the repeated invocations of God during times of misfortune, e.g. Anunziata’s pleas for mercy after the death of her husband, Geremio, Christ in Concrete is a biblical allegory, albeit not in the traditional sense.

One of the techniques Donato deftly employs throughout the narrative is personification. The most glaring example of this strategy can be found in Job, the impersonal, dehumanizing force that can offer either salvation or damnation to the construction workers who labor under its inscrutable rules and deceitful interlocutors. The fact that the construction sites Paul looks to for sustenance after his father’s cruel death constitute an actual character-and are referred to as such-demonstrates the centrality of work to this tale. It is the glue that bonds these men together even more than a common heritage, language or culture. It is also a consistently dark and foreboding force that menaces Paul and his co-workers, as well as a vengeful god that takes away his father, amputates his uncle Luigi’s leg, and ultimately sends his godfather Nazone plunging to his doom.

Through Paul’s eventual embrace of atheism-a process expedited by his talks with his Russian neighbor-as well as the sinister actions of the men who control the building trades upon which his livelihood depends, Pietro Donato establishes a didactic prose that permeates the novel. Despite its polemical style, there is a natural dramatic tension that I think most readers will enjoy, although I think the comparisons to The Grapes of the Wrath-another novel of social conscience released in the same year-are overwrought. The highly stylized speech of both the main and peripheral characters-most of whom are illiterate, first generation Italian immigrants-is off-putting at first, but like other patois used in conceptual fiction, e.g. A Clockwork Orange, Pygmy, you eventually adjust to its rhythms and cadences.

The book gives you an inkling of how precarious certain industries that rely upon immigrant labor are, especially during severe economic hardships-the novel takes place during the Great Depression-that displace millions of workers. But I think it also gives you an idea of how difficult it is to assimilate great masses of people who come from a different culture, were nurtured to speak another tongue, and who have to adjust to a completely different way of life. As I noted in my summary of the Intelligence Squared debate I attended, one of the main issues was the difficulty of assimilation, a point of contention between the two opposing sides. The fact is that previous waves of immigrants were given the space, both temporal and in terms of distance, to adapt to their changed circumstances and raise their children as full-blooded American citizens.

The danger lies in our current policy of unfettered, mass immigration in perpetuity, which prevents the assimilation and adaptation necessary for this country-and its newcomers-to thrive. One of the great lessons from Christ in Concrete is that immigrants-even first generation immigrants-can assimilate the values of their adopted country, which in Paul’s case means independence from the seemingly intractable beliefs of his mother. However, that process does not occur in a vacuum, and contrary to the dogma of people like Tamar Jacoby and her fellow open-borders apologists, it needs to be expedited by a society intent on retaining its core cultural and national identity. E pluribus Unum is not simply a quaint motto; it is the means by which people who come to America become Americans, and it is something that we can’t afford to lose as a nation.

This entry was posted on May 14, 2011 at 3:58 PM and is filed under Analysis, News and Analysis. You can follow any responses to this entry through the RSS 2.0 feed.