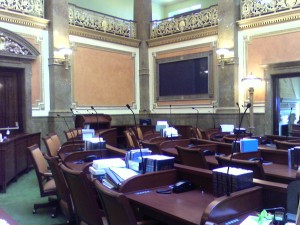 The Utah legislature has finally passed a raft of bills designed to serve as a compromise between those of us who support immigration enforcement, and those who want to thwart the will of the people and the clear intent of American immigration law. The fight over immigration in Utah has been documented extensively on this site in the past, and we will continue to cover the fight for the foreseeable future. However, we’ve reached a turning point in the debate over what to do about the thousands of illegal aliens living in the state of Utah, which has now enacted two bills that will be the subject of numerous lawsuits, as USA Today reports.

Although billed as a grand bargain, what the legislature in Utah has actually done is passed amnesty lite. It has essentially granted IAs the right to live indefinitely in the United States, in contravention of federal immigration law, while not explicitly conferring citizenship, which falls under the purview of the federal government. It has simultaneously gutted any serious enforcement provisions that would have been included in Senator Sandstrom’s final bill, which is why so many open borders organizations vociferously support this legislative compromise, notwithstanding the threatened lawsuit from the American Civil Liberties Union. One of the worst aspects of the bill is an enormous guest worker provision, which-as we all know-is the quickest way to eroding the middle class and encouraging further illegal immigration.

It will be interesting to watch the Obama administration’s reaction to this deal in the days and weeks ahead. A White House that was so eager to confront Governor Jan Brewer and the Arizona legislature, and to demonize the people who had sought to do something to address their state’s horrific problems with human smuggling, kidnapping, drug trafficking and assorted crimes that flow from our unprotected border, is now tasked with responding to Utah’s request for a waiver from federal immigration law.

How will President Obama and Attorney General Eric Holder respond? Only time will tell, but something tells me that the highly politicized response we saw in reaction to Arizona defending itself will be absent when and if the administration makes a final decision about whether to allow Utah to absolve itself from federal law.

This entry was posted on March 8, 2011 at 2:28 AM and is filed under News, News and Analysis. You can follow any responses to this entry through the RSS 2.0 feed.