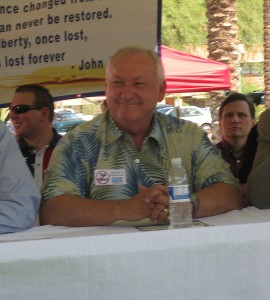 As we mark the end of the old year and the beginning of something new, it’s wise to take a step back and assess the accomplishments and setbacks of our movement. 2010 was probably the most significant year in terms of advancing the debate over immigration enforcement within the body politic of this country in recent memory.

The most notable event, of course, was the decision by Governor Jan Brewer of Arizona to sign into law Senator Russell Pearce’s signature piece of legislation, SB 1070. As a quick reminder, the Support Our Law Enforcement and Safe Neighborhoods Act makes it a misdemeanor to be an illegal alien, requires the enforcement of all relevant federal immigration laws by state and local law enforcement officials during their regular duties, and targets those who hire, shelter, or harbor people living in Arizona illegally.

Although large parts of the law have been enjoined by Judge Susan Bolton, Governor Brewer and the state of Arizona are appealing that injunction. In fact, the likelihood that this law will eventually reach the Supreme Court, as another Arizona law targeting employers of illegal aliens already has, is high. But even more importantly, the decision by President Obama’s Department of Justice, led by Attorney General Eric Holder, to sue the state of Arizona served as a litmus test moment in the broader immigration debate we’ve been engaged in since Californian’s approval of Proposition 187 in 1994.

Taking the side of special interest groups like the National Council of La Raza, LULAC and other opponents of immigration enforcement in the United States, such as the ACLU and the government of Mexico, against the state of Arizona, as well as the vast majority of the American public, told us all where the Obama administration stands on this issue. It also galvanized public support for the stance of Governor Brewer and spurred efforts to enact similar laws in other states, as this New Year’s article by UPI points out.

But SB 1070 wasn’t the only major national development in the world of immigration reform. 2010 also saw the attempt by Senate Majority Leader Harry Reid and his deputy whip, Senator Dick Durbin, to foist the DREAM Act upon us after being rebuffed repeatedly by Congress in the decade since it was first conceived. Thankfully, opponents of DREAM, led by the indefatigable Senator Sessions and his allies at Numbers USA, were able to defeat their backdoor attempt at amnesty for millions of illegal aliens.

As gratifying as this victory was, it was not the only success we had over the course of the past year. 2010 also saw the widespread adoption of Secure Communities, a program mandating local authorities share the fingerprints of arrestees with ICE, by  states and localities around the country, including ones run by governors with notoriously weak records on this issue, such as Massachusetts and our very own New York State. While perhaps a small step in the right direction, it is an indication that the Obama administration can be prodded into immigration enforcement when it is politically pressured to do so.

Perhaps the single greatest achievement of 2010, though, was the electoral victory of November 2nd, when the forces of immigration enforcement and reform defeated Speaker Nancy Pelosi’s deputies across the nation. And even though there were some blots on an otherwise great score card, the overall results represented a huge shift away from the House of Representatives that passed the DREAM Act in a lame duck session. Rep. Zoe Lofgren, whose comical efforts I’ve chronicled in the past, will be replaced in the new Congress with immigration hawk Steve King, while the former chairman of the Homeland Security Subcommittee, anti-fence, anti-enforcement Rep. Bennie Thompson, will be replaced with a congressman familiar with that territory, Rep. Peter King.

And even though the campaign to unseat amnesty proponent and panderer Harry Reid fell short, we did see the replacement of several dreadful members of the U.S. Senate this year, including the defeat of DREAM Act supporter Bob Bennet, and the retirement of former co-sponsor Sam Brownback-who is now the governor of Kansas. Overall, the November elections marked a huge shift in favor of immigration enforcement and common sense tools like e-Verify, which is a priority of new House Judiciary Committee Chairman Lamar Smith.

Overall, I think we can look back on the past year with a great degree of pride in our achievements and determination to correct those mistakes that were made in the course of this struggle. The focus of most of our energies over the past year has been in thwarting potentially disastrous legislation on the federal level, such as the DREAM Act and AgJobs, and helping states pick up the slack of the federal government, as was the case with SB 1070. I think 2011 will mark a transition to a focus on the federal government assuming its proper, but long-neglected, role in border security and immigration enforcement. The success of Secure Communities proves that state-federal cooperation can be an effective tool in stemming the flow of illegal immigration.

Rest assured, this website will continue to bring you news of any developments on that front as the year progresses.

This entry was posted on January 1, 2011 at 10:23 PM and is filed under Analysis, News, News and Analysis. You can follow any responses to this entry through the RSS 2.0 feed.