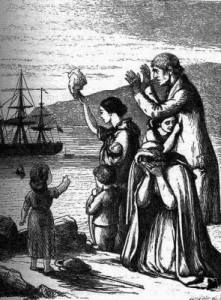 I suppose I should preface this post by stating that this commentary shouldn’t be taken as an indictment of any of my Irish relatives, who-needless to say-have much more liberal views of American immigration policy than yours truly. Should they be reading this website, which I doubt they are, I hereby declare that my personal philosophy is in no way a reflection upon their political views. With that preamble out of the way, I’d like to direct your attention to a column at Irish Central that takes Harry Reid to task for his alleged indifference to Latinos who would benefit from “immigration reform,” which in this case means wholesale amnesty for several million lawbreakers who happen to come from Latin American countries.

Despite supporting various forms of amnesty during his long career in the United States Senate, this columnist accuses Senator Reid of being a do-nothing, which I suppose is preferable to being labeled a Know Nothing, another favorite epithet of those who support open borders policies of one form or another. The back-story to this column involves several dubious election advertisements crafted by a former Republican political operative aimed at dissuading Hispanic voters from voting for Senator Reid’s re-election. Ads that have, unsurprisingly, been pulled by their creator. Of course, Majority Leader Reid’s own bumbling, divisive attempts at courting Latino voters have been catalogued endlessly by various Nevada media outlets. But the public spectacle generated by the absurdist theater that is Nevada’s U.S. Senate race is not the subject I would address today.

I would like instead to address the motivation of the Irish-American writer who condemns Senator Reid for not doing enough to force immigration reform, i.e. amnesty, through the U.S. Senate, onto the President’s desk, and down the figurative throat of an American public implacably opposed to the very concept. Living in a city where there are thousands of illegal aliens who come from Ireland-an admittedly small subset of the much larger population of foreign nationals living and working here illegally-and where there are several ethnic newspapers that cater to Irish ex-pats, I have had ample opportunity to listen to the voice of the Irish diaspora., which largely echoes the views of Mr. Roberts.

These views are informed to a large extent by personal experience-Niall O’Dowd, the publisher of ethnic papers such as the Irish Voice, himself immigrated to this country as a young man-and by a nostalgia for past waves of immigration-such as that propelled by Irish emigres to this country in the wake of their homeland’s devastating potato famine during the nineteenth century. Unfortunately, this nostalgia  for America’s past is wrapped in a layer of myths that immigration reform experts like Mark Krikorian have spent years meticulously debunking.

Unfortunately, that hasn’t prevented unscrupulous politicians in places such as New York from perpetuating such myths in order to pander to specific ethnic constituencies, or those who would benefit from ex post facto legalization of their decisions from lobbying them. Allowing politicial opportunism based upon historical exigencies that no longer exist-or that have been grossly distorted to further a specific agenda-to determine public policy in this country is not a wise path for America’s future. And no matter how militantly or persistently a political pressure group might lobby for bad policy, it won’t make that policy any better. A case in point is the campaign for amnesty, which is a horrible proposal whether it’s applicable to 10,000 illlegals from Ireland or 6 million illegals from Mexico.

This entry was posted on October 20, 2010 at 5:10 PM and is filed under Analysis, News, News and Analysis. You can follow any responses to this entry through the RSS 2.0 feed.