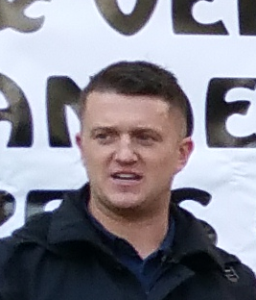 A small victory for freedom of thought in a nation which has gradually descended into the muck of fascism, aided in no small part by the wholesale importation of Islamic radicals. Paul Weston, himself a victim of political persecution for expressing wrong think, explains why Tommy Robinson is the #1 target of the British government in a disturbing essay for Gates of Vienna, which you can read here.

As frightening as what’s transpiring in the UK is to most rational human beings, the sad truth is that these anti-Western witch hunts could very well make there way to the United States, especially if a certain Democratic presidential candidate is elected. The stenographers for hate groups and jihad enablers like the SPLC and CAIR are already hard at work erecting a foundation to punish those who dare to voice reasoned criticism of the left’s favorite religion. Darkness has descended upon the West, and not simply in Europe; it’s time we woke up to that ineluctable truth. The time for dithering has ended; we need to stand up for our freedoms before they’re lost irrevocably.

This entry was posted on April 17, 2016 at 12:02 AM and is filed under News and Analysis. You can follow any responses to this entry through the RSS 2.0 feed.