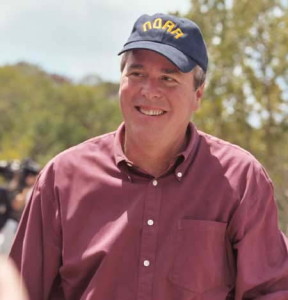 The Bush family’s position on immigration-more of it is good, even when it adversely impacts the people already here-is well known to those of us who have closely followed the careers of George H.W. Bush’s sons. This open borders advocacy-some would say demagoguery-has made Jeb Bush a favorite among the uniformly left of center Hispanic news media in this country, although has made no discernible impact upon his deep unpopularity among actual Hispanic voters. Therefore, it comes as little surprise that Jeb’s affinity for all things Latino at times crossed over into the realm of the delusional, as his voter registration application for 2009, which you can read here, amply demonstrates.

Aside from generating one of the more unintentionally amusing headlines published in the New York Times in recent memory, this revelation crystallizes in the public imagination what most astute observers have thought about the Bushes for some time. Namely, that their pursuit of the mythical pro-amnesty, Hispanic Republican voter, and embrace of the discredited notion of a Pete Wilson Effect, has completely skewed their perceptions of the American political landscape. To the point where the son of a wealthy WASP from New England who spent his life in the corridors of political power has somehow convinced himself that he’s an Hispanic immigrant trying to capitalize upon the American dream.

The 2016 presidential race has barely commenced, and it’s already a farce. Buckle up, folks!