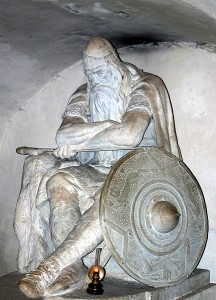 You’ll have trouble finding an accurate description of the motivation behind the terrorist attacks which took place in Copenhagen a little over a week ago, at least so far as the major media outlets are concerned. Even as European Jewry is being figuratively herded back into the ghetto, the newspapers and networks ostensibly responsible for reporting the news conceal it behind a veil of ideologically-inspired deception. The facts behind this outrage couldn’t be more readily available, yet the logical conclusions to be drawn are anathema to bien pensant opinion espoused by outlets such as the New York Times.

The deceased jihadist was not the first person to target the Great Synagogue of Copenhagen, as Daniel Greenfield points out. Unfortunately, I doubt that he will be the last, as the nation of Denmark-like most of Western Europe-has, over the past half century or so, been flooded with migrants whose progeny the Times will no doubt declare native sons if and when they decide to go postal on the indigenous population. In order to see what a failure the multiculturalist experiment in Europe, particularly Denmark, has been, I would recommend reading a piece by Michael Moynihan published two years ago in The Tablet.

Although encumbered by the open-borders dogma that plagues so many libertarians-and thus, unable to delineate the direct connection between mass immigration from the Islamic world and contemporary anti-Semitism in Europe-it is worth reading. Primarily because it makes explicit the ineluctable link between the tenets of Islam and the actions of immigrant youth which plague the headlines of European newspapers. We can’t begin to address this problem until we acknowledge what the problem is as a society. Alas, that’s something that the leaders of Europe-as well as the United States-are unwilling to do, regardless of the amount of innocent blood sacrificed to their ignoble ideal.

This entry was posted on February 22, 2015 at 8:34 PM and is filed under News. You can follow any responses to this entry through the RSS 2.0 feed.