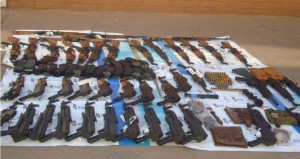 For those of you who believed the carnage wrought by this administration’s criminally negligent-if not intentionally malicious-Fast and Furious program had ceased-or even abated-I have some troubling news to report. Thanks to the indefatigable attorneys at Judicial Watch we continue to discover weapons implicated in violent crimes which can be traced back to the ATF’s gunrunning  obscenity. Although most of the devastation and loss of human life has been confined to Mexico and Latin America, gang-related violence involving Fast and Furious firearms has struck American cities as well.

You can read the Judicial Watch press release describing one such incident, which occurred in Phoenix, Arizona last year. Despite the usual obstruction and resistance by this administration, it was also able to obtain crime scene photos that reveal the identities of the victims and the serial numbers of lethal weapons our Justice Department placed in the hands of ruthless criminal entities. Even if the mandarins of the Washington press corps prefer to bury one of the greatest Executive crimes of the past five decades, it’s reassuring to know that those who care about the Constitution and journalism refuse to give our teflon President a free pass.

This entry was posted on December 28, 2014 at 4:38 AM and is filed under News. You can follow any responses to this entry through the RSS 2.0 feed.