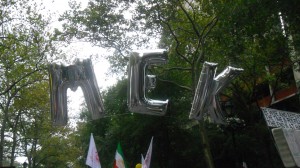 One of the fascinating aspects of living in this city is that, for good or ill, you’re exposed to a whole raft of ideologies and political philosophies of which, but for location, you might have remained blissfully ignorant in perpetuity. Granted, some of us choose to remain mired in a state of ignorance notwithstanding the fact that we dwell in the cultural capital of the planet. Even so, those of us with a smidgen of intellectual curiosity find ourselves compelled to investigate  these esoteric political beliefs, if for no other reason than merely to satisfy the more quizzical side of our nature.

That’s what brought me down to Dag Hammarskjold Plaza, the site of multiple demonstrations against the current president of Iran, Mahmoud Ahmadinejad, this past week. The largest faction of protesters came at the urging of the Mujahadeen-e-Khalq, otherwise known as the People’s Mujahadeen of Iran, otherwise known as the MKO, not to be confused with the National Council of Resistance in Iran, which serves as the MEK’s parliament-in-exile. Confused yet? Bear with me.

The banner you see above might look vaguely familiar, and that’s probably because you’ve seen it before-in New York City, no less! That’s right, it was part of the original Occupy Wall Street encampment at Zuccotti Park, which was eventually dispersed by the NYPD.

Despite its many permutations throughout the decades, one of the constants of the MEK has been its association, however attenuated, with the  left. So its decision to align itself with the staggeringly incoherent, yet incontestably leftist, OWS movement should not have come as a surprise. And just as you’ll find PMOI supporters at large gatherings of leftists, you’re more than likely to find a diverse array of leftists-with an interest in anti-IRI activism-at MEK rallies.

At the last MEK demonstration against Mahmoud Ahmadinejad I observed an informational booth manned by a member of the Worker-communist Party of Iran-in exile, of course- who stood behind a crimson red banner that resembled this flag. The irony of denouncing the world’s leading state sponsor of terror while venerating-seemingly-Russia’s first mass terrorist apparently being lost on him.

Large sections of this rally weren’t any more intellectually coherent, unfortunately. Case in point, a group of Western feminists protesting the Iranian state’s deplorable treatment of women, including the not infrequent executions of those who run afoul of its clerical leadership’s capricious enforcement of Islamic law. 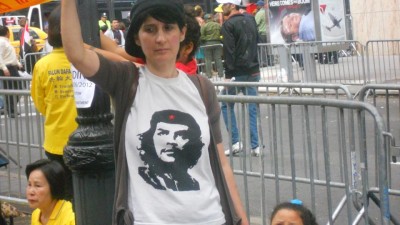 Although the Iranian regime’s periodic bloodletting of its citizenry is deserving of universal condemnation, I can’t help but think that doing so while wearing a t-shirt emblazoned with the image of one of the Western Hemisphere’s most notorious executioners-and a totalitarian, to boot-is a decidedly mixed message.

Even so, it can’t be disputed that the Iranian system of justice-including its hellish penal institutions-is barbaric even by the most narrow definition of human rights. As the poster above indicates, Iran is one of the few countries that still routinely sentences juveniles to death, more often than not carrying out those verdicts. This tragedy is made all the more horrific by the complicity of Western suppliers of construction equipment; equipment that is regularly utilized in one of the Iranian regime’s preferred methods of execution.

Even though this facet of capital punishment in Iran is rapidly changing due to grassroots political pressure, there are other more traditional methods of murdering unsatisfied citizens, as the picture above-and the story of Soraya M.-demonstrate.

Death and imminent danger were recurring themes throughout the rally, along with the threat posed by a potentially nuclear-armed IRI. Those executed by the Iranian state, before, during, and after the 2009 Green Revolution were highlighted at different points throughout the day.

Another issue promoted-in keeping with the depressingly repetitive news coming across the news wires-is the anti-Assad revolution within Syria. In addition to spotting some Syrians sporting hats with the logo of the Free Syrian Army-a group engaged in questionable  actions itself-there were dozens of men and women bearing the pre-Baathist flag of the Syrian Republic, which has become synonymous with the civil war which has ravaged Syria for the past year and a half.

The inextricable bond between that regime and its benefactors in the Iranian government was referenced throughout the rally. That the Syrian government would probably be unable to repulse its domestic opponents without the military assistance it receives from Iran is an inexorable truth.

So is, it would seem, the precarious nature of Bashar al-Assad’s decade-long reign, although making geopolitical predictions-as history tells us-is always a dicey proposition.

One of the intriguing elements of the anti-Assad faction within this demonstration was the attempt to cast a non-sectarian facade over their efforts. Even though the ecumenical sentiments of these opponents of Baathism were no doubt sincere, I’m not certain that Syrian Christians feel the same way, especially after witnessing the fate of their Assyrian and Catholic brethren in neighboring Iraq.

Though the Syrian regime’s persecution of religious and ethnic minorities is well documented, the prospect that Syria’s most imperiled minority will benefit from yet another Islamic awakening during this Arab Spring is doubtful. One need only look to the precedent established by the Islamic Revolution in Iran in order to see that non-Islamic faiths don’t always thrive in the aftermath of Middle Eastern regime change.

That said, those looking to depose the mullahs in Iran have a compelling argument to make. One that I hope to examine in my third and final post on this subject, in which I’ll continue to explore the history-and perhaps the future-of one of the most vocal and controversial Iranian opposition groups, the Mujahadeen-e-Khalq.

This entry was posted on September 30, 2012 at 1:17 AM and is filed under Analysis, News. You can follow any responses to this entry through the RSS 2.0 feed.