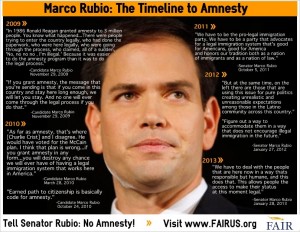 Of the year, that is. For those of you who weren’t able to watch the full 3 hour-long extravaganza, including the preliminary “kiddie” debate, I suggest skimming the fantastic coverage provided by Numbers USA on its Twitter account, which-as usual-got to the heart of the matter. The upshot, from what I gather, is that Marco Rubio, chief architect of the Gang of 8 mass amnesty, attempted to destroy Ted Cruz’s credibility on the immigration by pointing out Cruz’s own less than stellar record on the issue while reaffirming his universally unpopular stance.

If Senator Rubio is the future of the GOP, then I suppose there’s a reason why Mrs. Clinton is grinning. On to 2016…

This entry was posted on December 16, 2015 at 2:10 AM and is filed under News and Analysis. You can follow any responses to this entry through the RSS 2.0 feed.