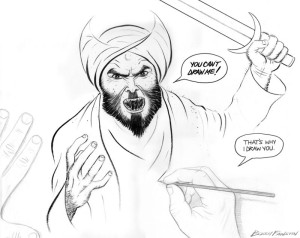 It seems like the world’s most peaceful religion just can’t keep itself out of the headlines these days. On the heels of repeated attempts to assassinate artists and writers, the foot soldiers of Allah meticulously murdered over 60 infidels yesterday in a spate of terror that stretched from Kuwait to France. Although the attack outside of Lyon resulted in the fewest casualties, it’s probably the most relevant to the American public. The massacre on the Tunisian beach is in keeping with pan-Islamic terrorist networks policy of attacking economic interests-particularly those which rely upon Western tourism-in order to undermine local governments, while the explosion at a Shiite mosque in Kuwait is drearily predictable.

The attempted bombing in France, on the other hand, fits a pattern of  domestic terror attacks perpetrated by Muslims who were imported to the West from the Middle East and North Africa. The notion that resettling tens of thousands of Muslim refugees in the heart of Europe will decrease the likelihood of these events recurring in the future is lunacy, albeit of a kind distressingly familiar in the councils of Europe. This is why it’s imperative that free people tell the truth about Islam and the failures of multiculturalism and third world immigration while we still can.