A Realistic Assessment Of The State Of The Union 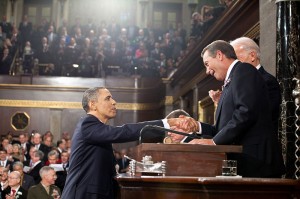 While kvetching about the State of the Union-its vacuity, its interminable length, or its simple inability to compel the attention of most Americans, despite being  broadcast simultaneously on every major television network-is ubiquitous among Washington observers, I don’t think most people comprehend the malignant influence this ritualistic exercise has upon the body politic.  The SOTU is the embodiment of the modern imperial presidency, from its regal trappings to its very structure, which brooks no dissent from pesky congressmen-with a few welcome, notable exceptions.

Listening to a president who not only regularly flouts the Constitution but boasts of how he will do so in the future only adds to the frustration conscientious Americans experience during this annual exercise in statolatry. Thankfully, the inestimable John Derbyshire has taken the time to not only digest the presidential blather, but to explain its larger political/historical significance. His analysis is well worth reading, and certainly worth pondering more than any of the dreary proposals outlined by Barack Obama last night. For what it’s worth, I agree with Mr. Derbyshire that Senator Sessions would have been an ideal sparring partner for the President. Unfortunately, considering the views of Republican leaders regarding immigration patriots, I don’t think that prospect was in the offing at any point leading up to yesterday’s presidential address.