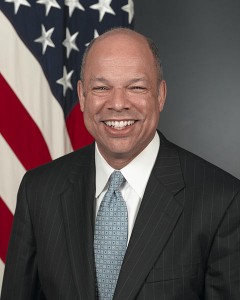 Here’s the roll call vote confirming Jeh Johnson as the next Secretary of the Department of Homeland Security. There are a number of interesting inferences that can be made from the “nay” side of the ledger, which constituted a little over a third of the Republican Conference. While some of the votes  don’t require elaboration-such as that cast by immigration patriot Jeff Sessions-others might strike the casual observer as somewhat surprising.

The decision by Senate Minority Leader Mitch McConnell to oppose Johnson’s nomination has little to do with principled disagreement with the Obama administration’s illegitimate amnesty plans-as he is one of the chief reasons the Gang of Eight amnesty bill was approved by the Senate-and is likely tied to a home state Tea Party challenger whom he will face in next year’s Republican primary.

Senator Rubio-the Republican veneer of the Gang of Eight bill-knows all too well the career-ending consequences posed by an ostensibly conservative challenger, which is why he’s spent the latter half of this year furiously running away from the legislative amnesty that he will be in large part responsible for enacting, should immigration reform be implemented in the coming months.

Whether these politically opportunistic decisions will matter in the end remains to be seen, but the fact that there is a glaring lack of leadership among Senate Republicans is indisputable. Don’t expect much in the way of critical oversight when Janet Napolitano’s drearily similar successor sets up shop at DHS.

This entry was posted on December 17, 2013 at 3:17 AM and is filed under News. You can follow any responses to this entry through the RSS 2.0 feed.