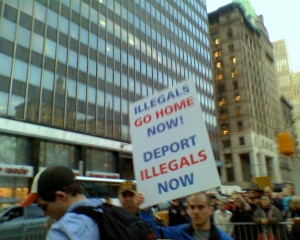 Congress continues its annual month-long hibernation, but that doesn’t mean you have to slumber. The drive by open borders lobbyists never ceases, which means that we’ll have to work even more furiously to thwart their plans. Tea Party Patriots has provided an invaluable guide delineating just how you can hold your congressmen accountable for his or her actions. The DREAMers have already claimed a scalp down in Florida; it’s time that we got to work asserting our rights as American citizens and demanding that our voices be heard.

It’s time that the immigration debate ceased being a monologue.