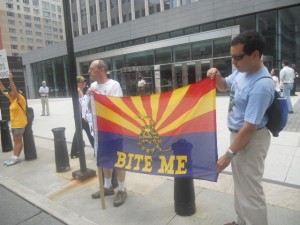 Even as Janet Napolitano’s flunkies and the Obama administration continue their war against Arizona, the vast majority of ordinary Americans, and rank and file ICE agents,  stand for law and order and against an illegal invasion aided and abetted by elected and unelected officials in Washington D.C. We stand with them as well.

This entry was posted on June 28, 2012 at 2:26 AM and is filed under News and Analysis. You can follow any responses to this entry through the RSS 2.0 feed.

2 Responses to Stand With Arizona