Obama vs. the United States 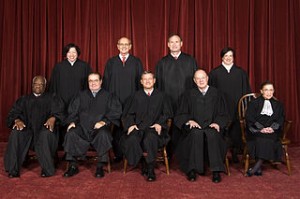 The actual name of the case, of course, is Arizona vs. the United States, which-as Jan Brewer points out in her wonderful book, Scorpions for Breakfast-is an inherent contradiction. The United States overwhelmingly supports the state of Arizona, and endorses the landmark immigration enforcement law that this administration is trying to suppress.

Even so, that’s the name of the case whose constitutionality the Supreme Court has decided to resolve during this session. Thankfully, you can read the transcript  and listen to the audio of the oral arguments from Wednesday. I also recommend watching the brilliant Paul Clement’s incisive defense of Arizona, from a federalist perspective, courtesy of MSNBC.