October 18, 2017.  New York City. Americans For a Safe Israel (AFSI) and JCCWatch.org led a protest against David Myers, the new President and CEO of the Center for Jewish History. David Myers is a foe of Israel and Jewish history.

Read more to see how these demonstrators defended Israel from the enemy within. 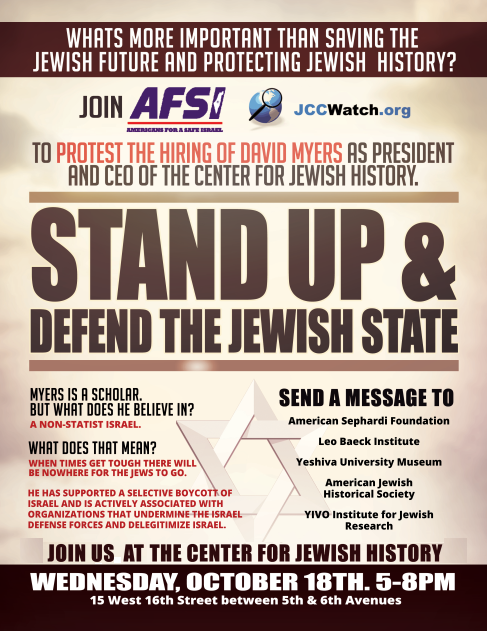 David Myers called the founding of the State of Israel a NAKBA! 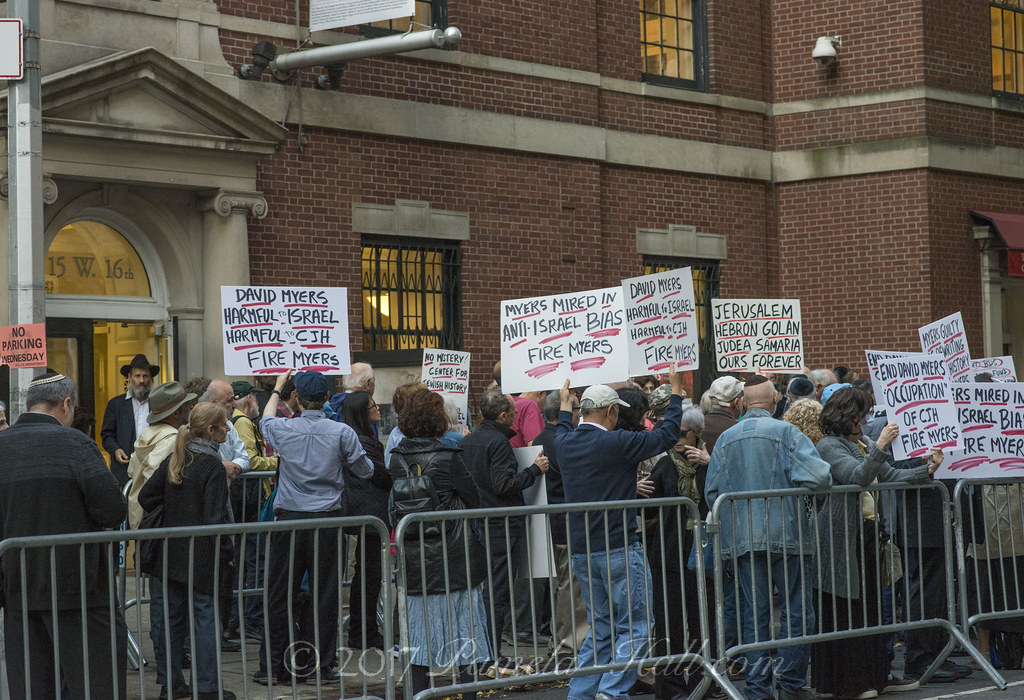 We, the people, the grassroots, are here to speak up for TRUTH. Enough of the lies and falsehoods. Enough of the revisionist history. The time is NOW, as we stand before the Center of Jewish History — the home of five esteemed institutions – that has allowed itself to be trapped in a quagmire. With David Myers as CEO and President of the Center, it becomes the Center of Revised Jewish History, with the Jewish story, the Jewish entitlement — biblical, historic, and legal, lost in the fictions and distortions that he brings with him.

Myers has preached the “inevitable demise of Israel”. How dare he deny our 4000-year-old history, and Hashem’s promise to us that we are his chosen people, to whom he gave the Torah and the Land of Israel? How dare Myers speak about removing Israel as central to Jewish identity?

There is no other people that has always made Jerusalem its central core. In the midst of the joy of the Jewish wedding, the glass is shattered, reminding us of our connection to Yerushalayim. 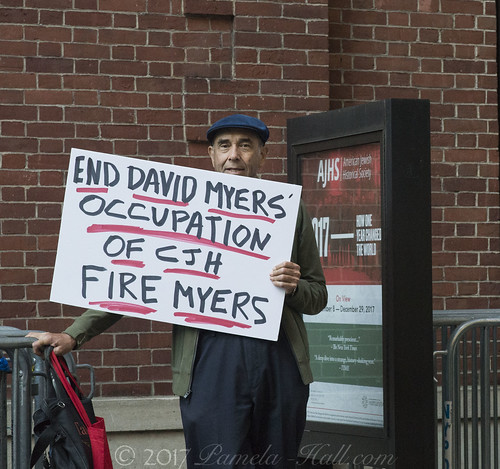 Has David Myers been to the “settlements” in Judea and Samaria? Has he ever been on a trip such as an AFSI Chizuk mission, where we climb the hills of Itamar, Yitzhar, Kedumim, Elon Moreh, Shilo, Eli, and on and on? Has he met the people and seen their homes, schools, work places? If he has, then he knows there is no “occupation” and these are the biblical holy places, and NOT the West Bank. If not, then he must visit them before he condemns them.

Joining the protest hosted by AFSI and JCC Watch were the peaceful supporters from the New JDL-NY. 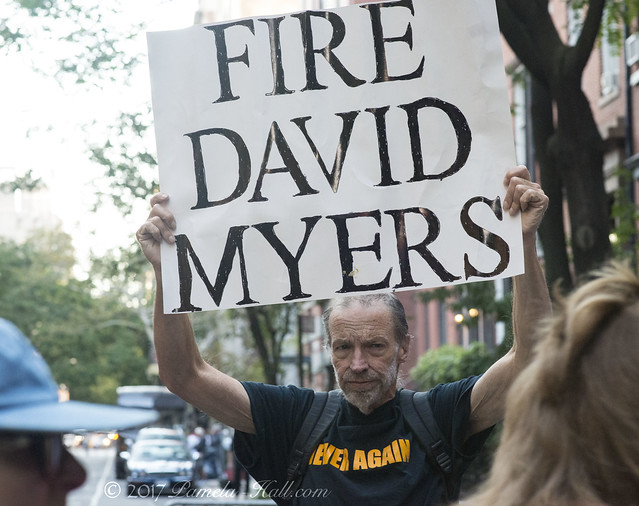 All were there to support the State of Israel and to peacefully protest the egregious hiring of David Myers as CEO for the CJH. It is an outrage.

How dare David Myers excuse the evil terrorism of the Arabs which has been going on since the early 1900’s and continues on a daily basis today. He says that it is “frustration” driven. What drivel is that? What humanity is that? Do we excuse mass murderers because they are “frustrated?”

How dare David Myers rewrite Jewish history so that the Balfour Declaration of 1917 is questioned, the Israel victories of 1948 and 1967 are declared disasters, and a case of Israel “conquering” its own land, rather than re-claiming it?

We have to change the trajectory — anti-Israel propaganda against Israel cannot be tolerated – especially in an institution named THE CENTER FOR JEWISH HISTORY. The time is NOW!!

What history will David Meyers be teaching those who walk through those doors? What lies and defamations will he be promoting, disguised as historical facts? Will it be the propaganda of J Street, the New Israel Fund, BDS, If Not Now, Open Hillel  and the Academic Advisory Council of Scholars for Israel and Palestine? This is intolerable. 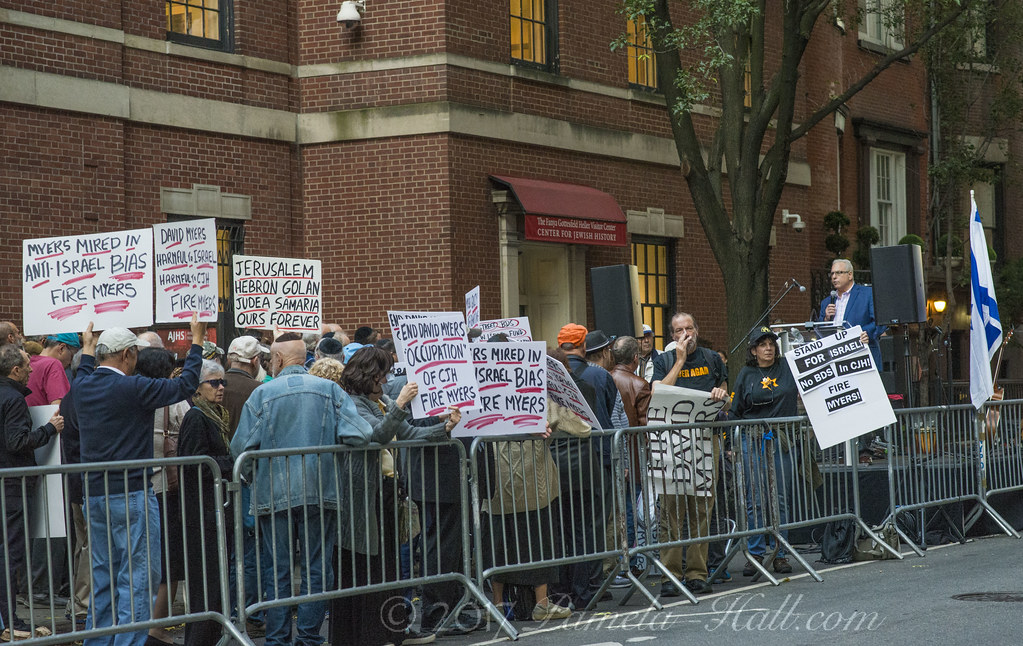 What can YOU do? It is URGENT that all those concerned should CONTACT THE CENTER FOR JEWISH HISTORY PARTNER ORGANIZATIONS AND ASK,”WHY AREN’T THEY PROTESTING AGAINST DAVID MYERS?”

The five organizations comprising the Center of Jewish History have been silent about David Myers’ ascendancy to the leadership of CJH. We must ask them, WHY?

DAVID MYERS MUST RESIGN FROM CJH AND THE ANTI-ISRAEL BIAS AMONG ITS LEADERSHIP MUST BE EXPOSED AND EXPUNGED.

WE MUST NOT ALLOW CJH TO BE TAKEN OVER BY THOSE OPPOSING ISRAEL AND TRYING TO REWRITE JEWISH HISTORY.

CONTACT THE LEADERSHIP OF THESE ORGANIZATIONS AND ASK THEM, WHY?. After all, what’s more important than saving the Jewish Future and protecting Jewish History?

[Where indicated, pictures and video property of Pamela Hall]