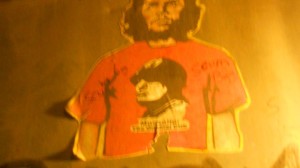 Fidel Castro, like his psychopathic patsy Ernesto Guevara Lynch, was a man who relished terrorizing civilians-in Cuba, the United States, throughout Latin America and the Caribbean, and even in Sub-Saharan Africa-even if it meant the immolation of millions in a nuclear holocaust. Unlike Che-who in addition to being a sadist and mass murderer was a complete and utter failure-Castro was able to watch his experiment unfold on his 11 million guinea pigs over the course of half a century.

He lived to see a million and a half Cubans flee the tropical gulag he had created, including his sister and daughter. He inherited a country that had one of the best healthcare systems in the Western Hemisphere, as well as a positive net migration rate, and turned it into the sort of dystopian hellscape you can only experience in a state controlled solely by Communists. A country where even the upper middle class remain mired in the sort of entrenched poverty that those living in the most decrepit housing projects here would blanche at. Castro lived long enough to immure tens of thousands of his opponents in brutal slave labor camps and dungeons-including some of his most devoted Marxist comrades-and bury thousands more beneath Cuban soil. After all, dead men speak no tales.

Of course, this hasn’t prevented a rogue’s gallery of Marxist cretins and useful idiots, including most of the Canadian political establishment judging by my Twitter feed, from heaping praise upon a man who murdered more innocent people than Augusto Pinochet by a factor of 10. While this headline from The People’s Cube might be satirical, the message it conveys is completely accurate. Namely, the ruling class continues to valorize the life of someone responsible for democide simply because he shared its affection for socialism. Although some writers in the mainstream press are brave enough to describe the destructiveness of this vile ideology and explain how Fidel Castro’s victims are a direct result of its implementation on a mass scale, this awareness hasn’t reached the rest of our culture’s opinion-shapers.

They continue to lie not only about pre-Castro Cuba but also about the innate and ineluctable brutality of socialism, because if they were forced to tell the truth it would mean the death of their worldview. Egalitarianism and altruism are the first steps on the path to the guillotine, which is why the charnel house created by the Castro regime was so predictable. For those of you who’d like to learn more about trail of tears left behind by the left’s favorite monster, I’d recommend reading the following books:

Against All Hope: A Memoir Of Life In Castro’s Gulag, by Armando Valladares

Exposing The Real Che Guevara: And The Useful Idiots Who Idolize Him, by Humberto Fontova

Before Night Falls: A Memoir, by Reinaldo Arenas

This entry was posted on November 28, 2016 at 1:08 AM and is filed under Analysis, News, News and Analysis. You can follow any responses to this entry through the RSS 2.0 feed.