Read more for the ugly and un-American reality, as I have documented over the years.

The New JDL said,“Since CAIR will use the parade as an opportunity to recruit and promote their false agenda, exposing CAIR should be everyone’s mission.”

In 2010, Nihad Awad Executive Director and Founder of Council on American-Islamic Relations was a Grand Marshal. (second from right.) 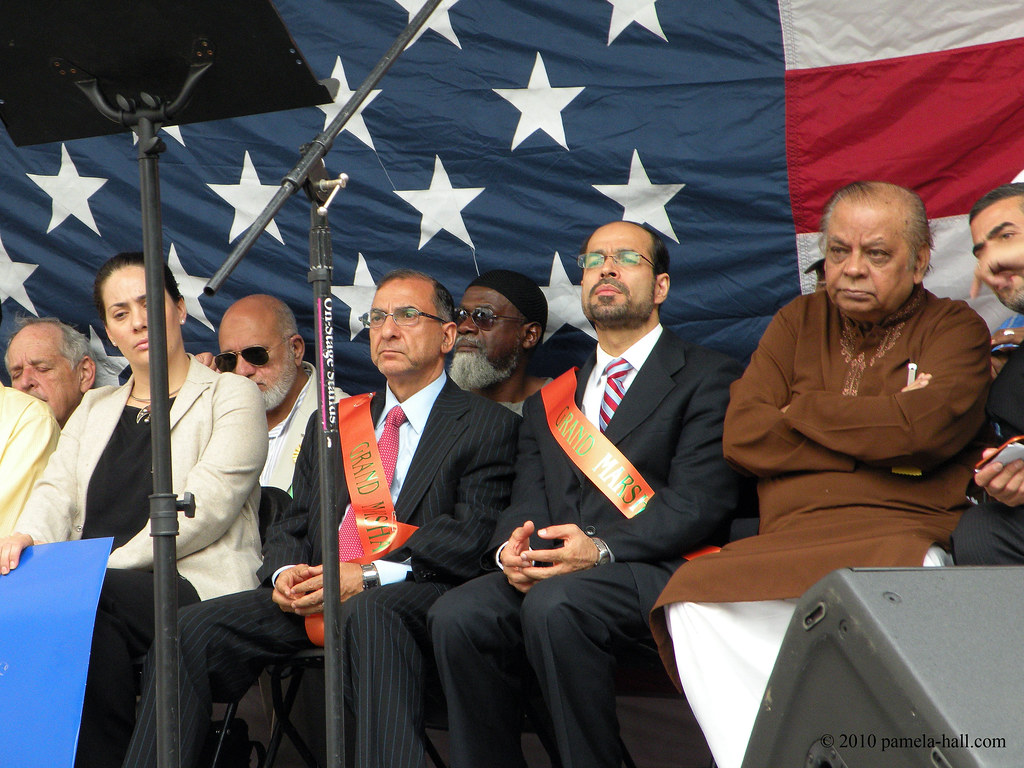 In 2017,”for the first time in the parade’s history, a Jewish leader will be honored: Rabbi Marc Schneier will serve as the honorary grand marshal.“ Who is this bridge-building rabbi?

Rabbi Marc Schneier, the philandering spiritual leader was booted from the Rabbinical Council of America two years ago after dumping wife No. 4 so he could marry wife No. 5. He is now married to wife No. 6…. one congregant told The Post last year,“It’s like, ‘Marc cheated on his wife again — what’s new?’ It became a running joke: the annual Marc Schneier wedding.

This desperate attempt to jump-start the dwindling Muslim Day Parade, with a philandering rabbi and terror-loving CAIR, came to naught. It remained a fragmented event, yearning to build bridges to nowhere. 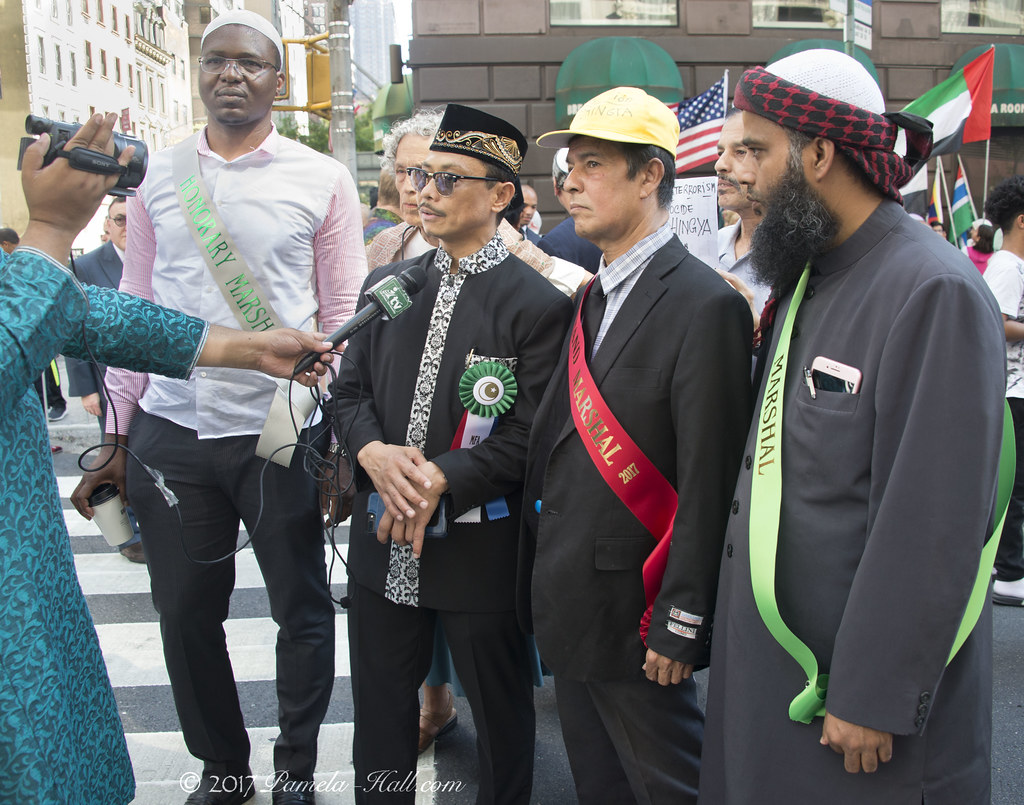 After 32 years, not even the Muslim community is motivated to show up.

I heard more than one reporter/photographer comment on the very thin turnout this year .

They had expected a larger crowd, due to claims of Trump-inspired Islamophobia, but that was not the case.

The parade started with tarps laid out on Madison Avenue for the noon Dhuhr prayer. 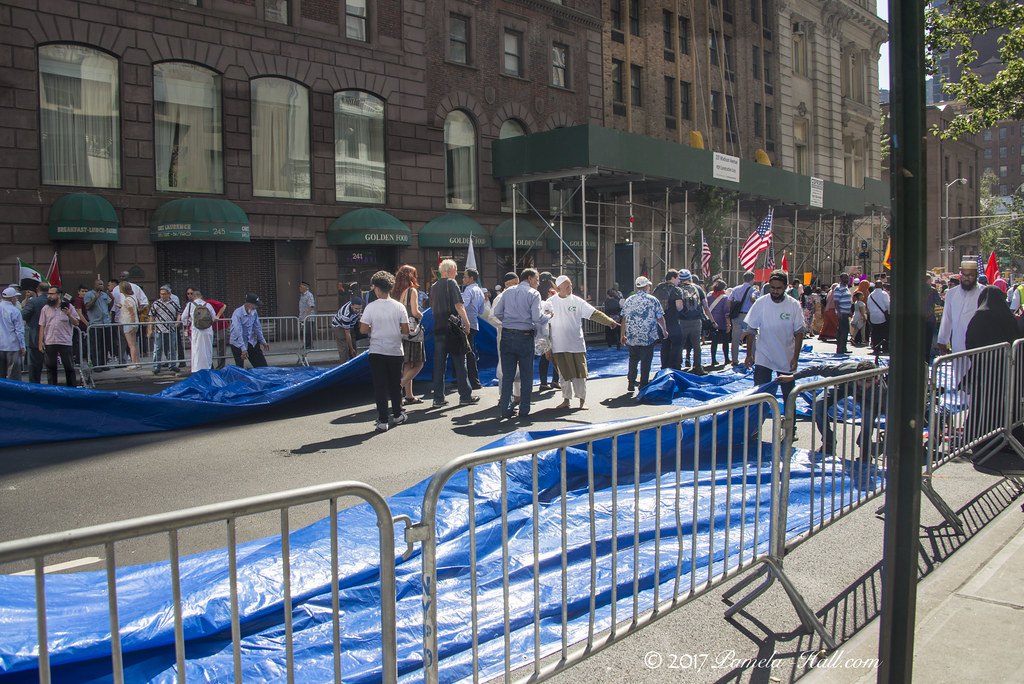 All Muslims must have to support this noble cause. We must have to come out, stay united and show our strength minimum at this platform which called a Muslim Day Parade. 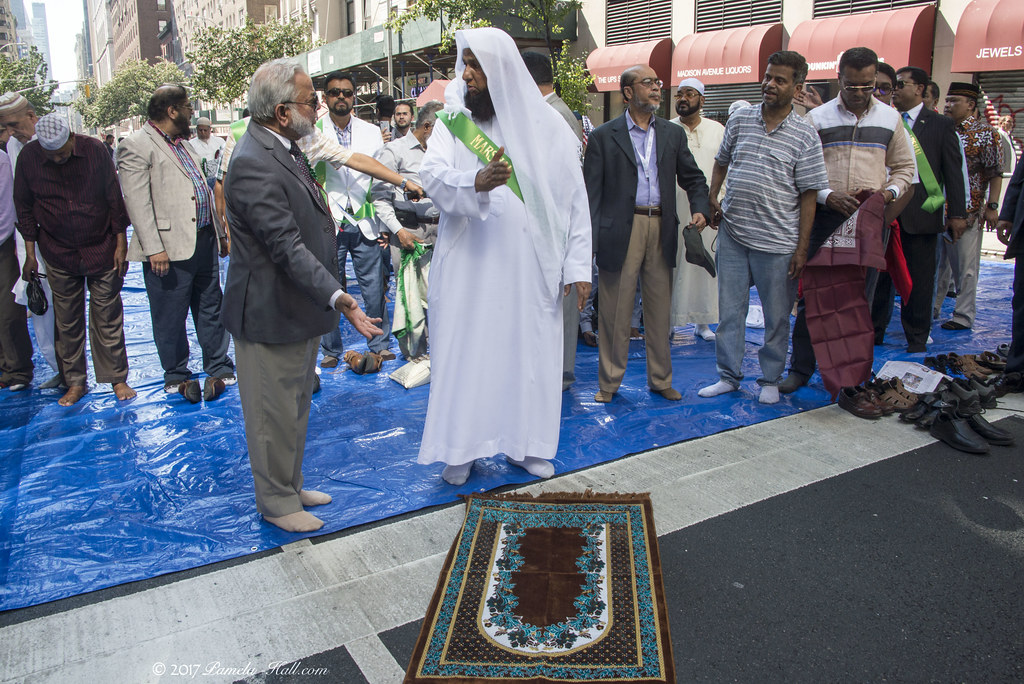 It’s not me it’s not you. It’s US brothers & Sisters. It’s all of US and all about US.  Building Bridges. 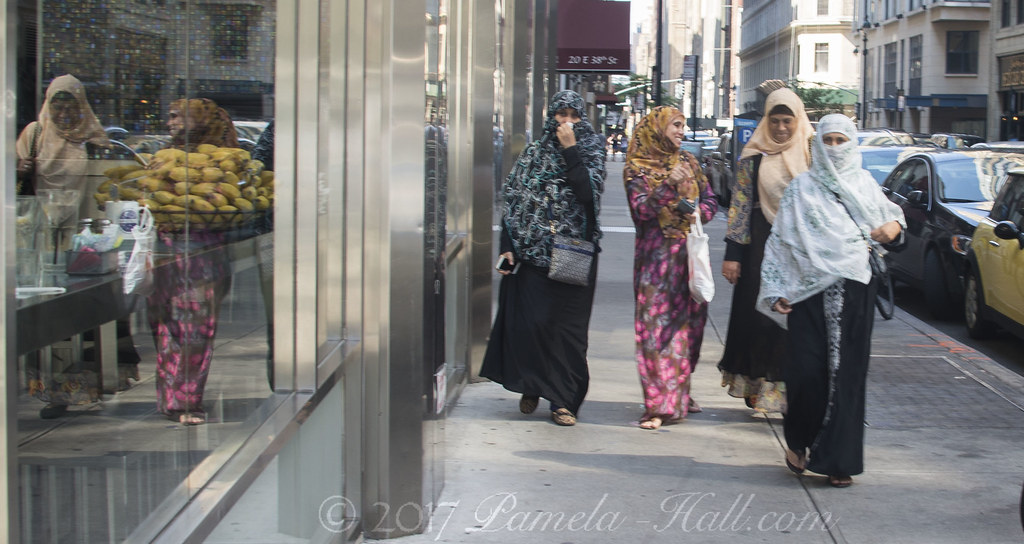 As salamo Alikum brothers & Sisters. Come with your entire family. Remember together we strong and unbreakable strength divided we fall. Show your strength. Send the message to entire world thru your unity. God bless you all. Ameen. [sic] 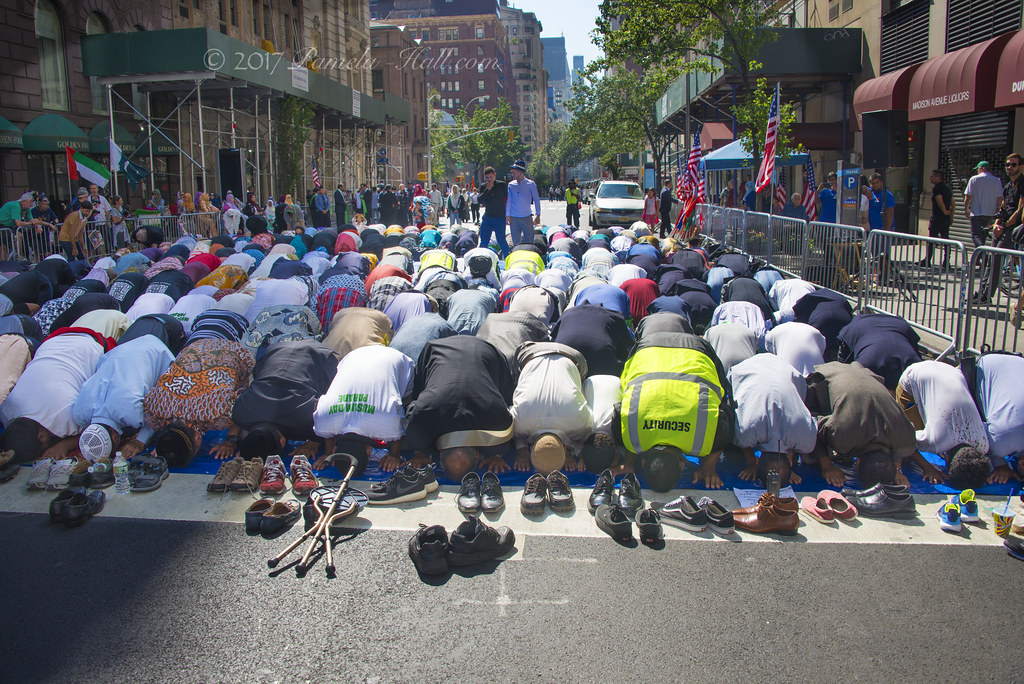 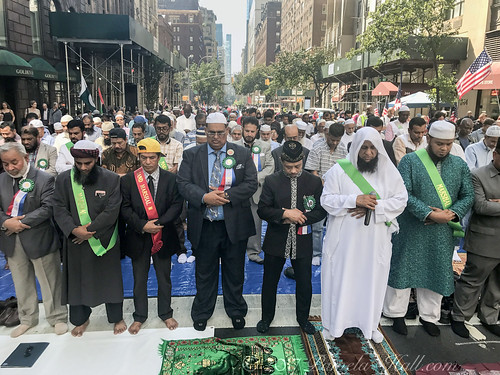 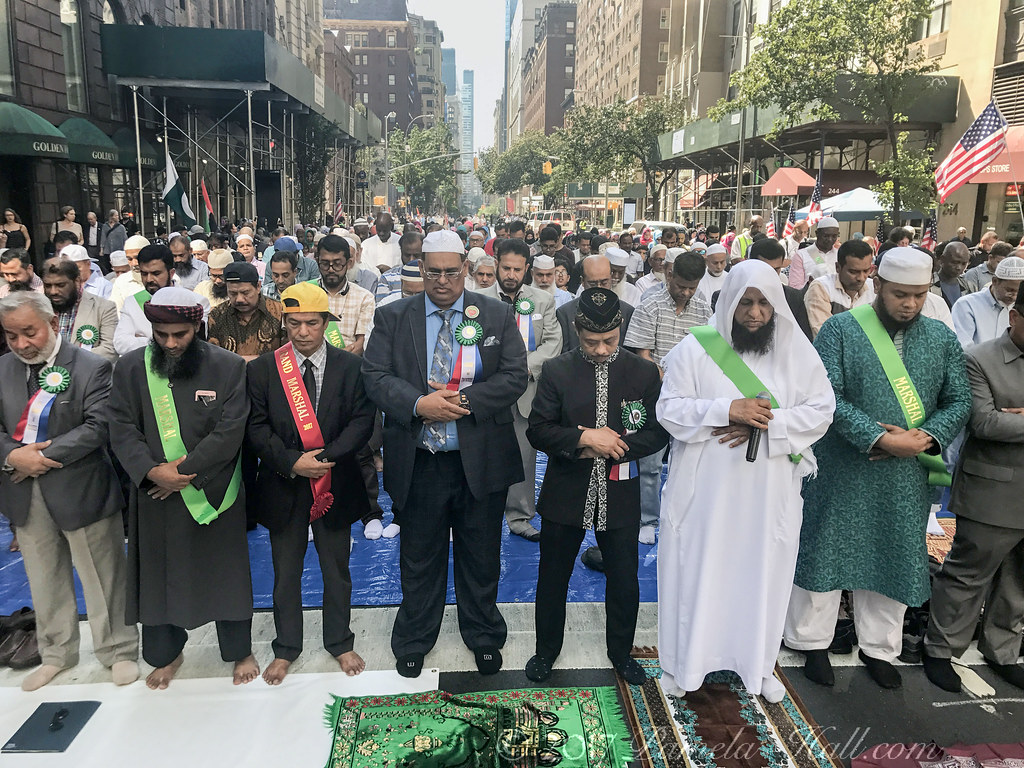 Friends, try as much as possible to participate. Many reasons why it is crucially important to take part. 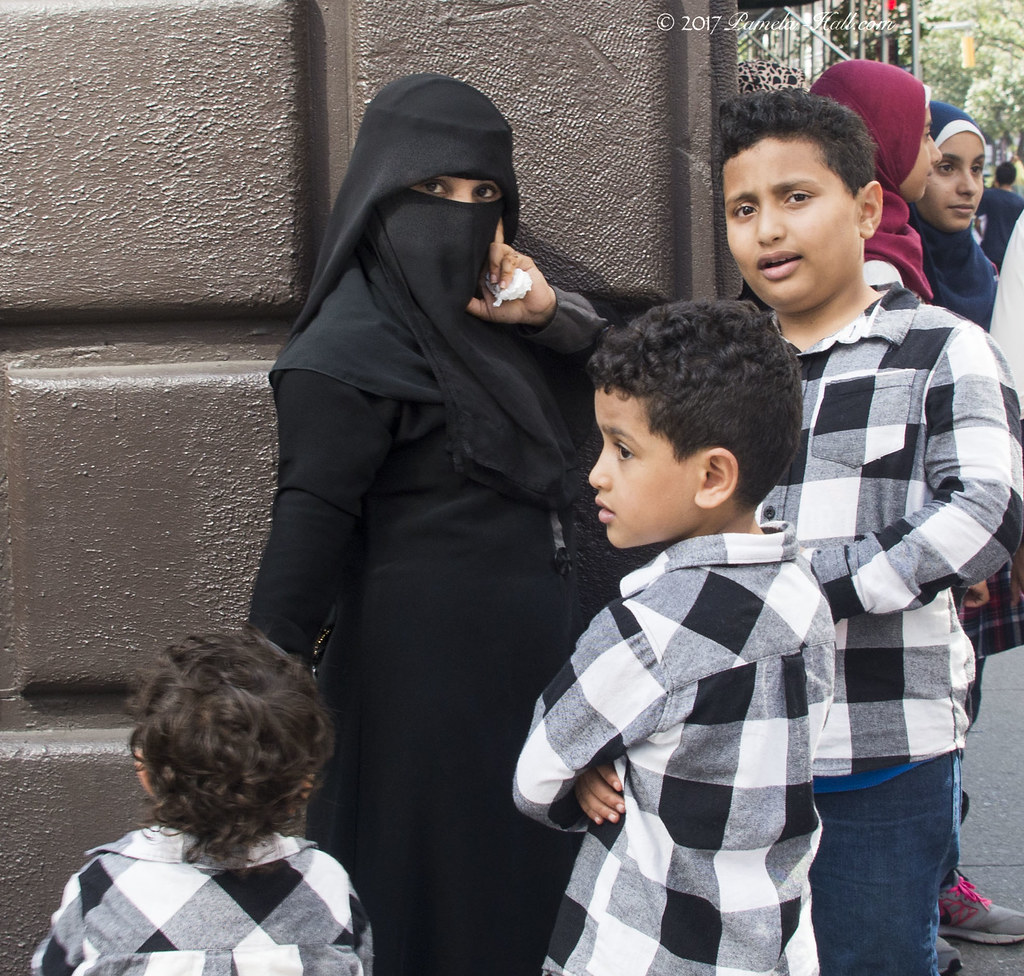 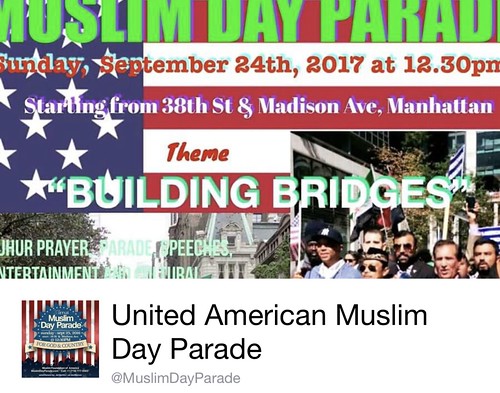 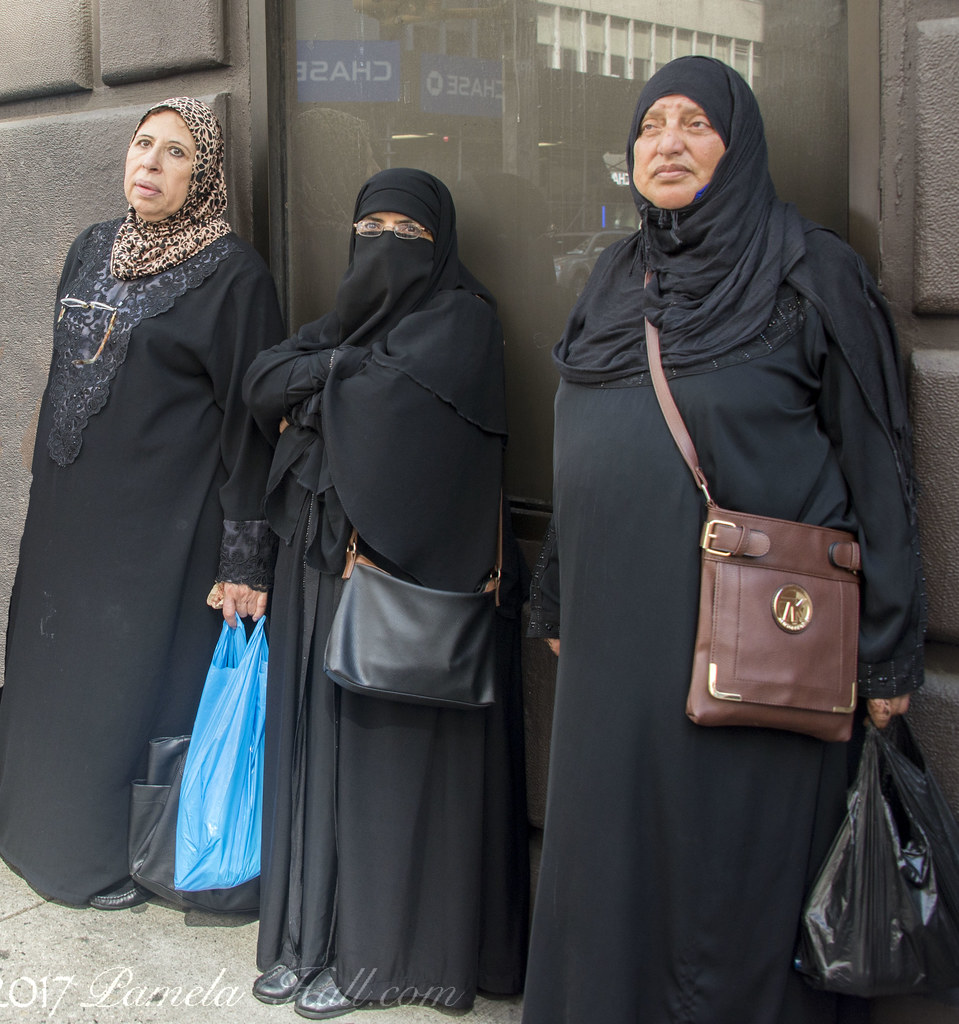 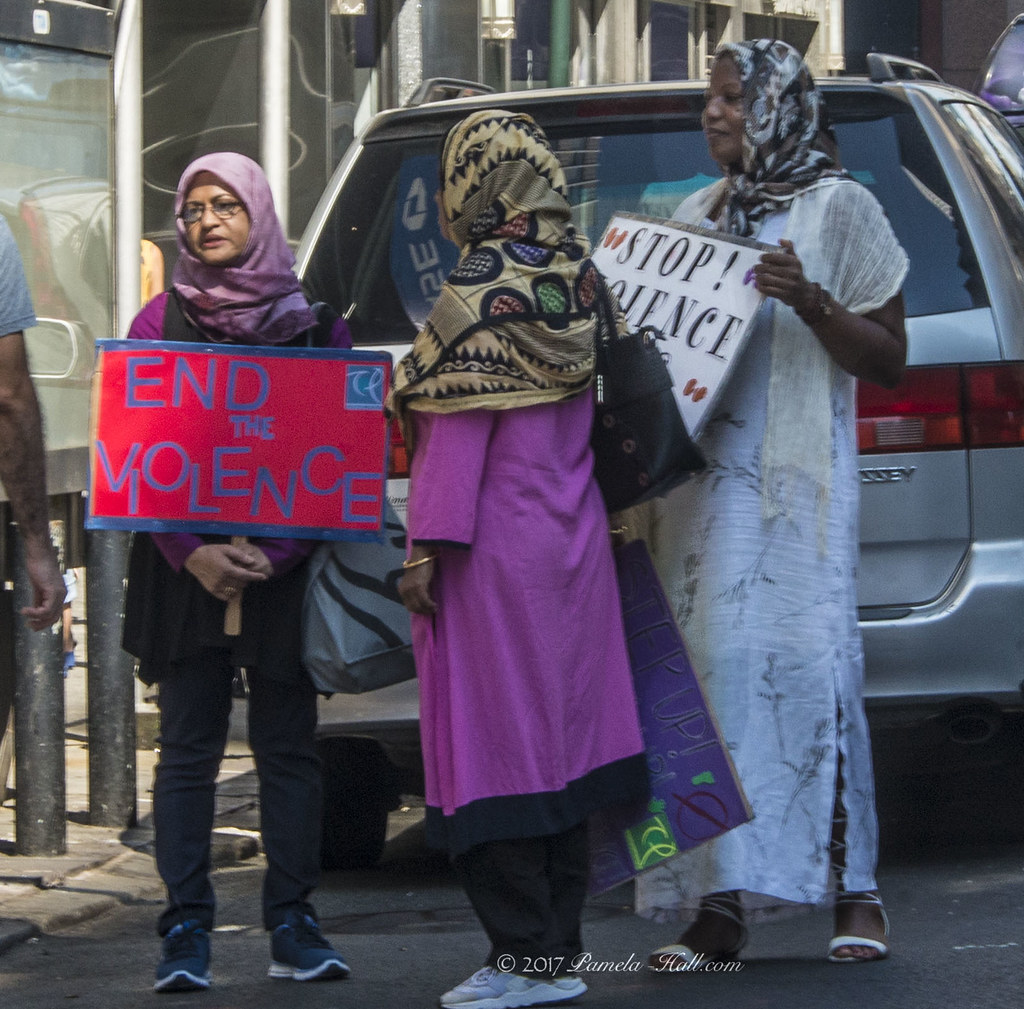 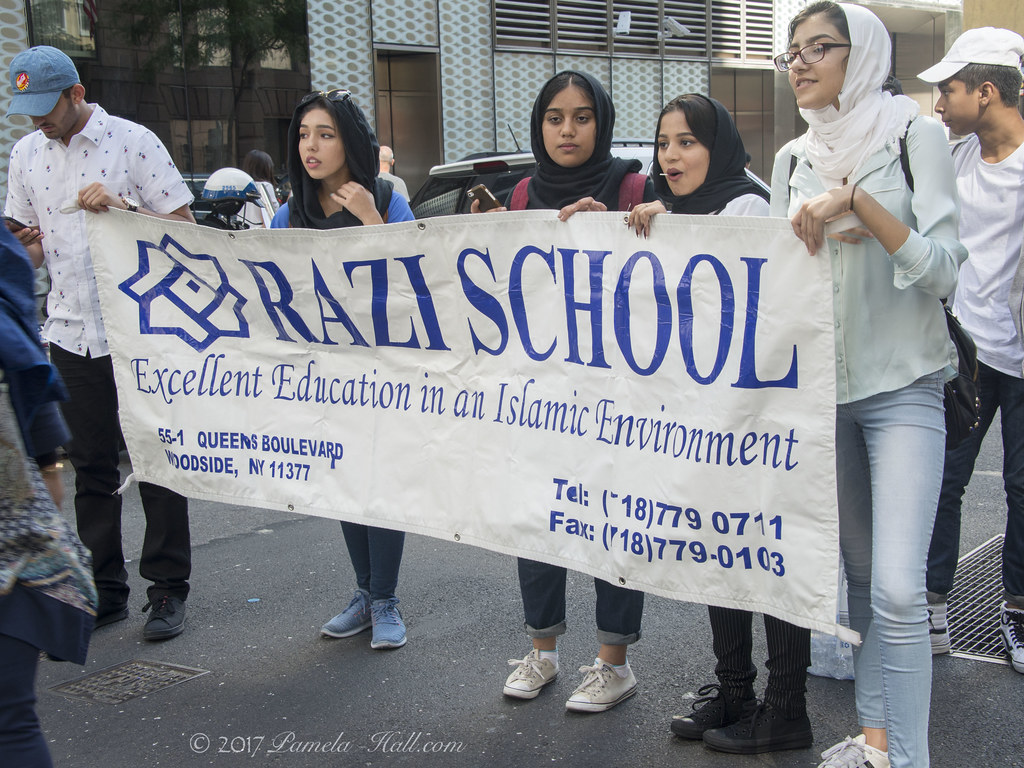 The NEW JDL peacefully protested the parade and its organizers. “No Bridges With Terrorists. NO CAIR!”

How do you build bridges when one of your sponsors works with the Muslim Brotherhood and finances Hamas? 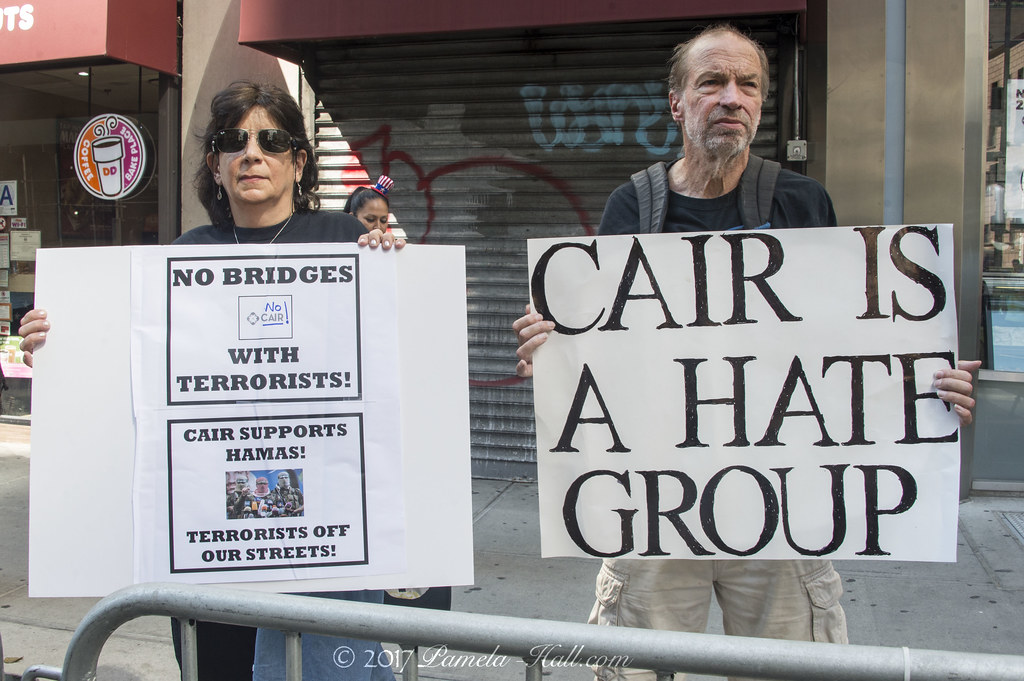 The organizers claim the parade will address anti-Semitism. Really? With CAIR on board, the parade supports attacks against Jews in Israel. 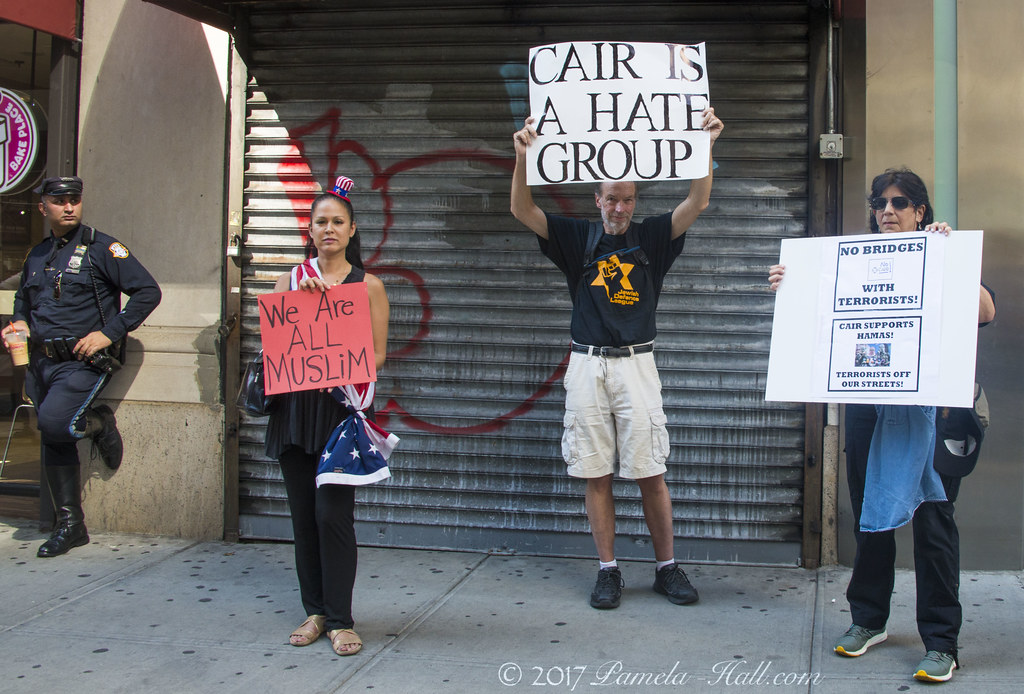 Predictably, the ‘progressive’ Jews lent support to CAIR and terrorism. They would have made fine Kapos at Auschwitz. 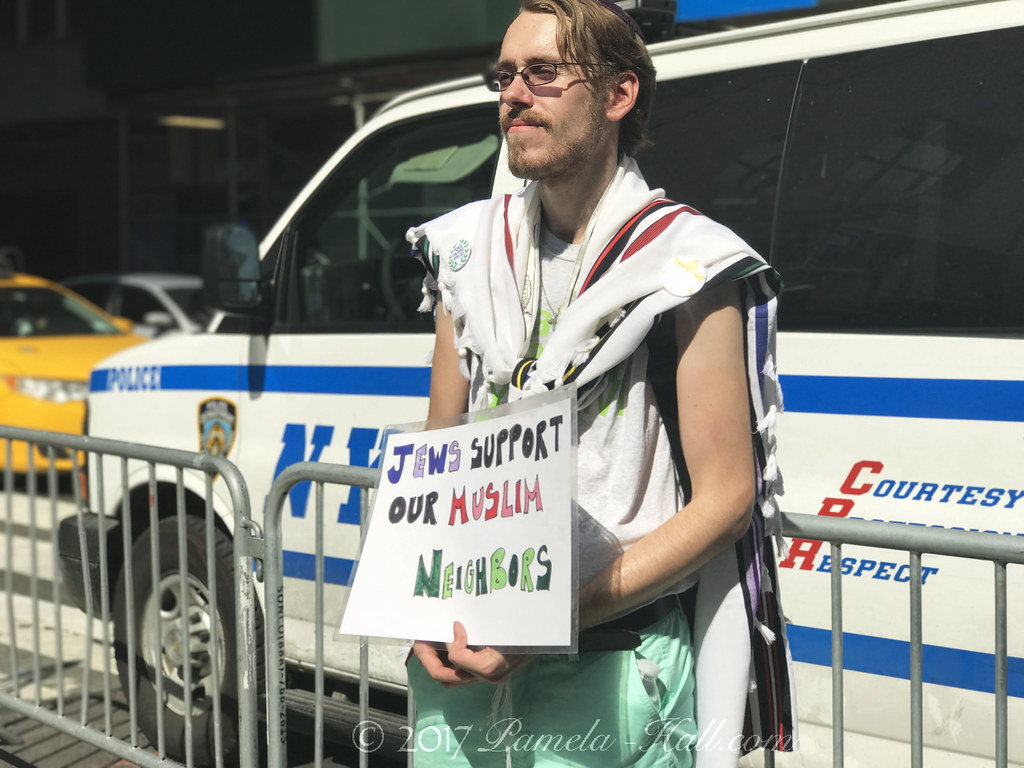 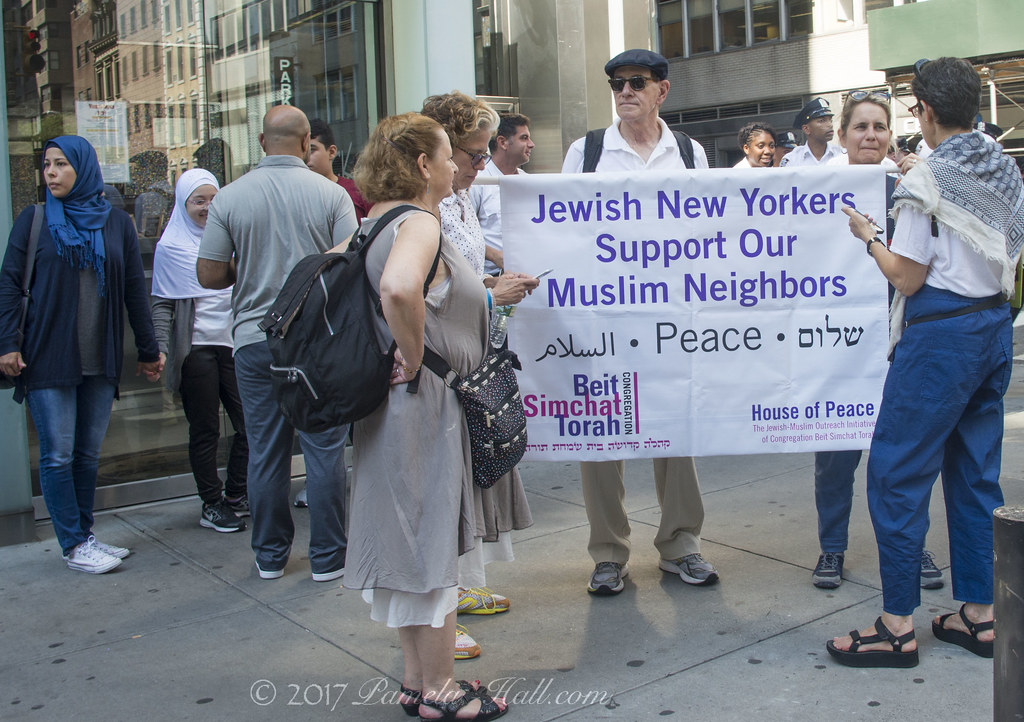 Erhan Yildirim, a Turkish undertaker and community co-ordinator for the NYPD, gave a hard stare to the JDL signs. 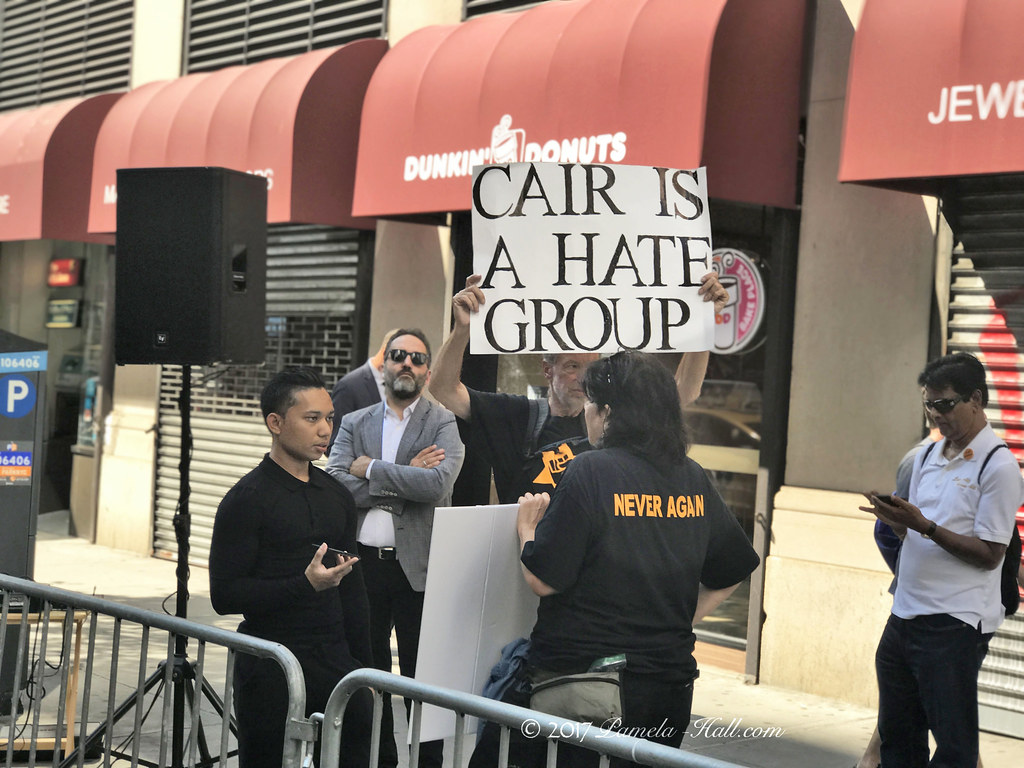 The Muslim Day Parade legitimizes CAIR as a benign advocacy group, which they are not; and the idea that Islam promotes peace, which it does not. 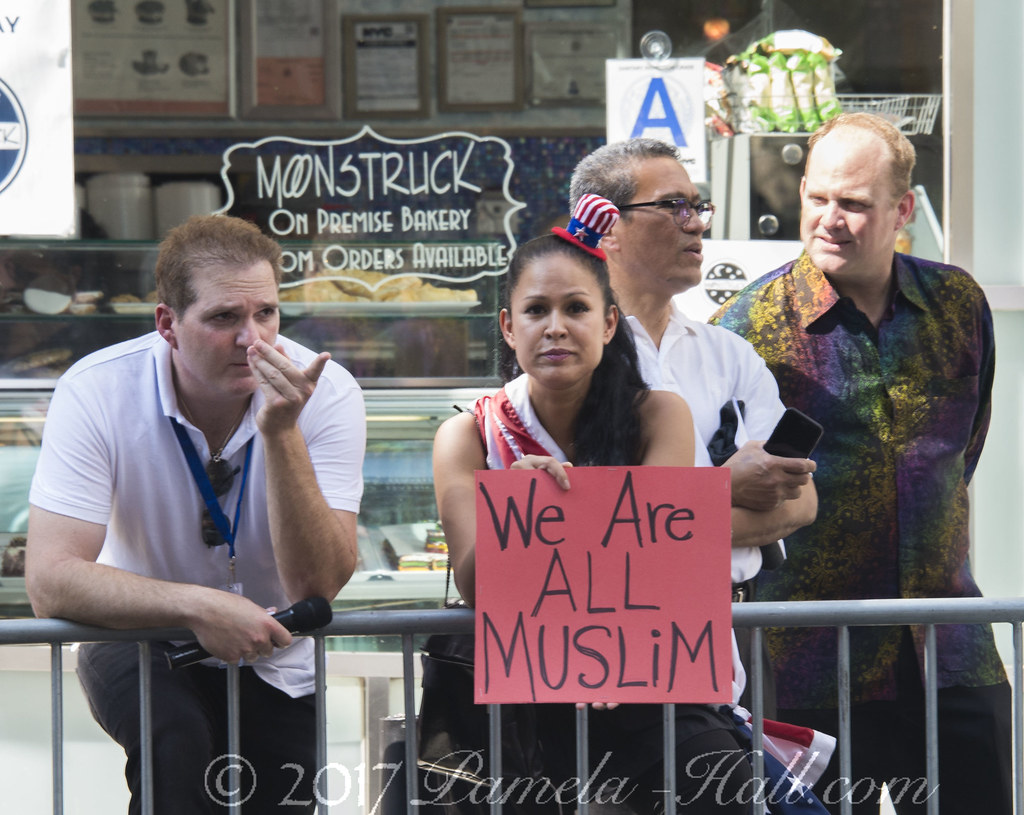 After the prayers, I decided to skip the walk down Madison Ave. But the New JDL went the whole distance. This was their report:

Yes, we walked with them, however we started to feel less love the closer we got to the staging area. (25th St and Madison Ave) One “lady” insisted on calling us “Hitler’s children”. 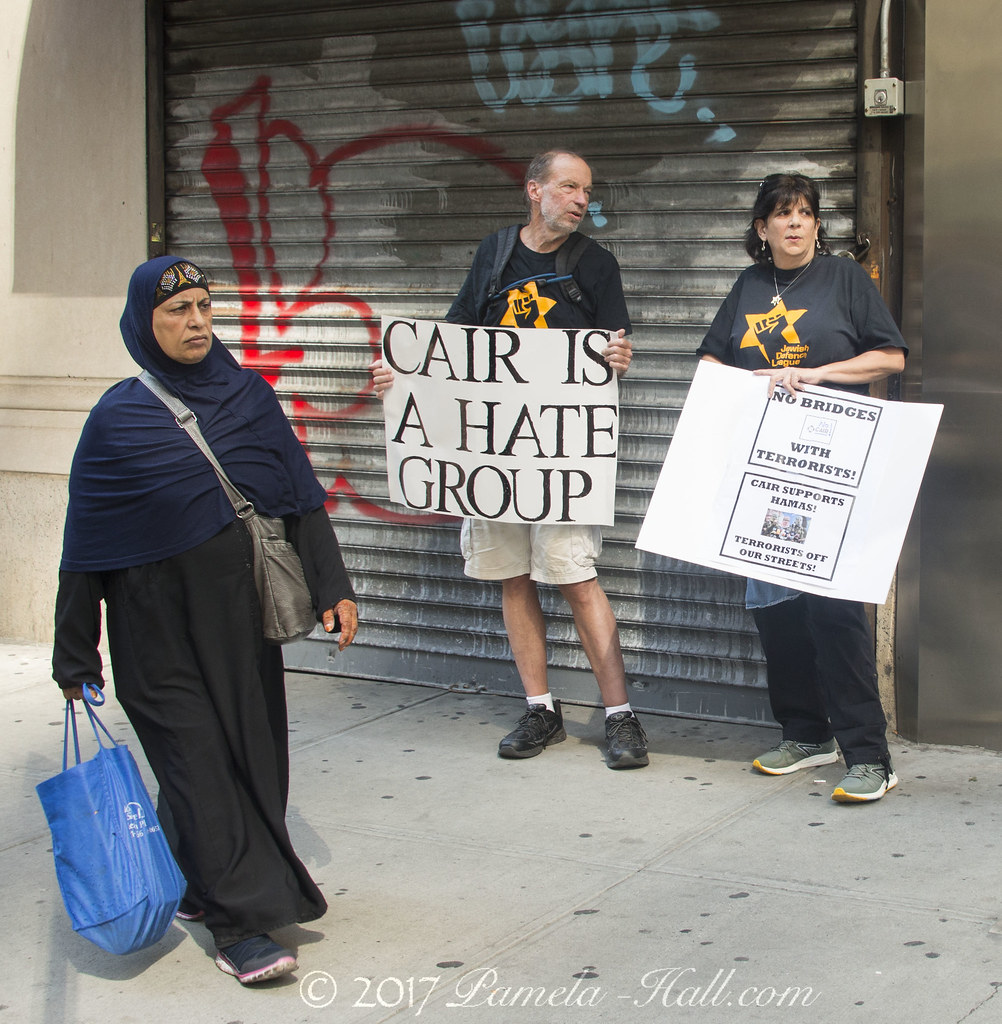 On the flip side, a very nice black guy, who was a medic assigned to the parade, gave us ice packs and a male participant from the parade shook James’ hand. When we got to the speakers’ area, the love was gone.

One rather angry “lady” took our pic and then went to parade “security”. A large black dude who told us since CAIR is part of the event, we can’t stand there with the signs. He told us if we didn’t leave he would get the police. 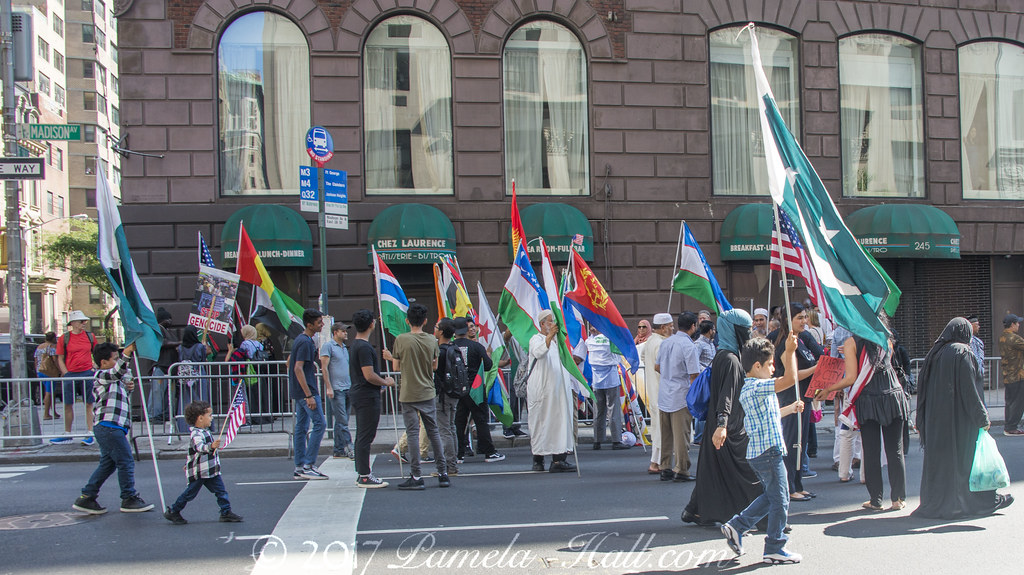 We told him very nicely fine, get the police. If the police ask us to leave, then we will go. His final attempt at having us removed, he went to a couple of large police officers in riot gear and told them about the “bad Jews”. (the saga ends)

The speeches were boring as all hell. Most of the speakers could not be understood. They should have spoke in their native languages. Carolyn Maloney spoke. I understood her. The rabbi (Mark Schneier) … the rabbi spoke liberal gibberish.

(Note Sarsour and Schneier at “I am a Muslim, too” – at a separate event in Times Square earlier this year)

Oh yes, there were three floats. THREE . We couldn’t figure out why there was a Turkish flag and two others (not sure where they were from) on the Temple Mount float. They called it Al Aqsa. Tried to inform them otherwise but they wouldn’t listen. 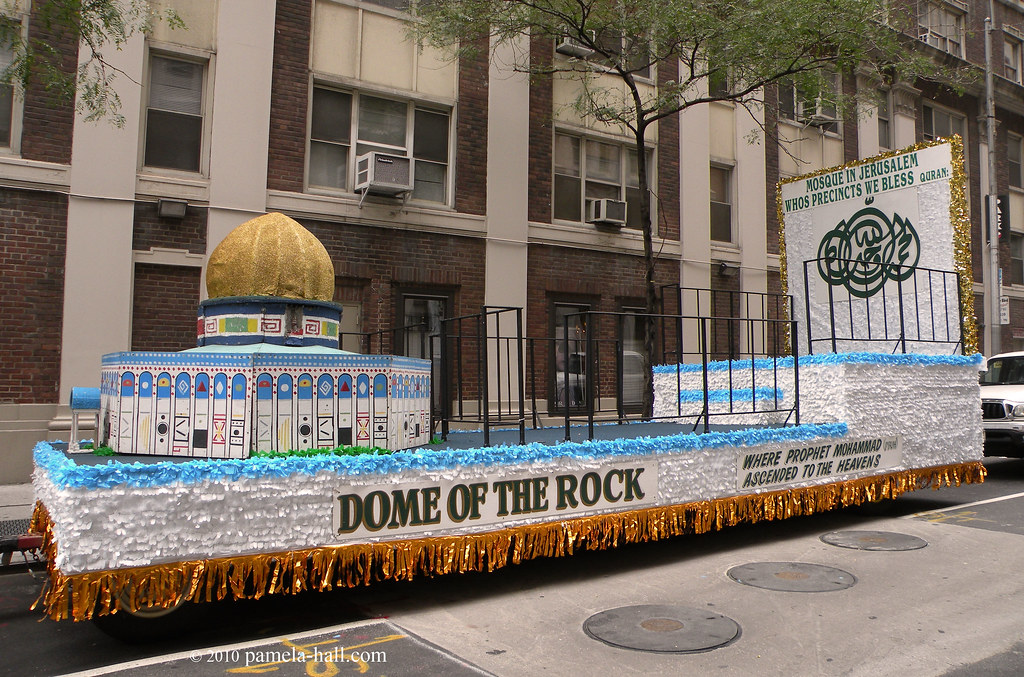 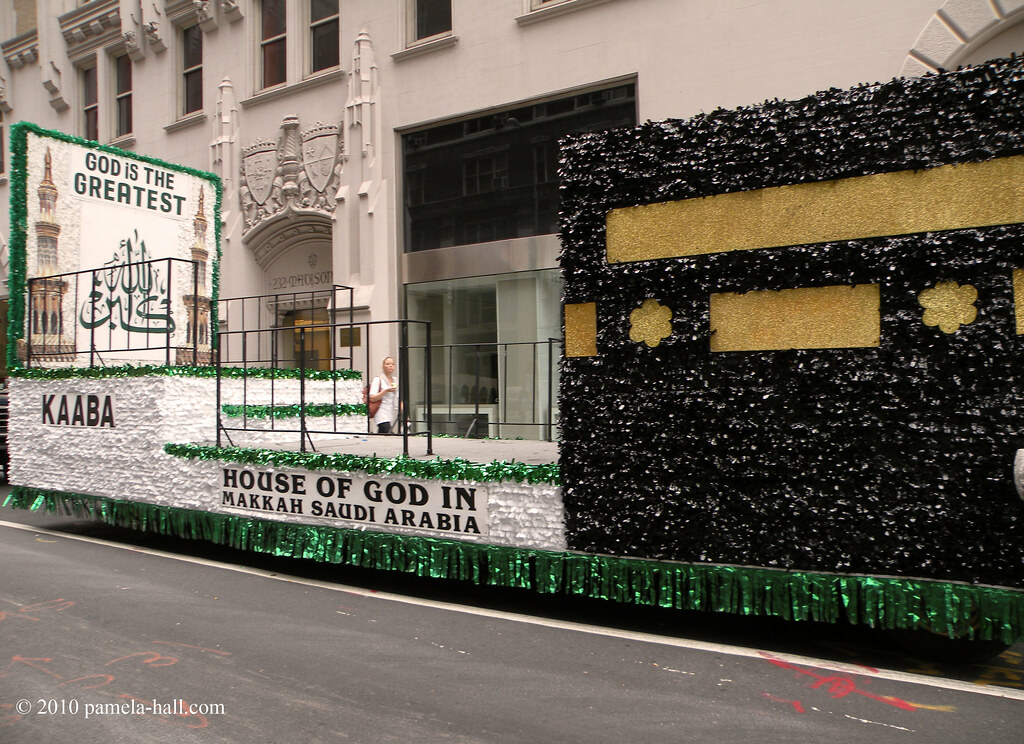 We tried to decide which float was the best. It was very challenging because there was such a variety. (snark intended)

One more thing, no Muslim Day Parade would be complete without some hard core “I love Jesus” people coming over. One of them danced some sort of jig. Now their t shirts were “inflammatory”. On it was – Muslims bad, Homosexuals bad, etc. (I’m paraphrasing.) No one said anything to them. Only the bad Jews/JDL.

This had to have been the most boring parade I have ever been to. Good grief. We decided we were probably the most entertaining people there.

On a good note; we brought awareness about CAIR. Many people never heard of CAIR. Now they have. End the silence! Anti-Semites have no place on our streets!

For ten years I’ve observed this annual event. And now, as it dwindles down to obscurity, I need to look back before I walk away.

Supported by CAIR and the very left-leaning Jewish BDSers (Boycott, Divestment, Sanctions), these elements did not make the bridge inviting nor strong. It is not the first time that terrorism has made its presence known within the ranks of the parade.

In 2013 — the militant flags marched down Madison Avenue. Plastic guns. Jailed virgins. What were they thinking?

Women hung. The scaffold. The noose.  These were parade floats in 2014. 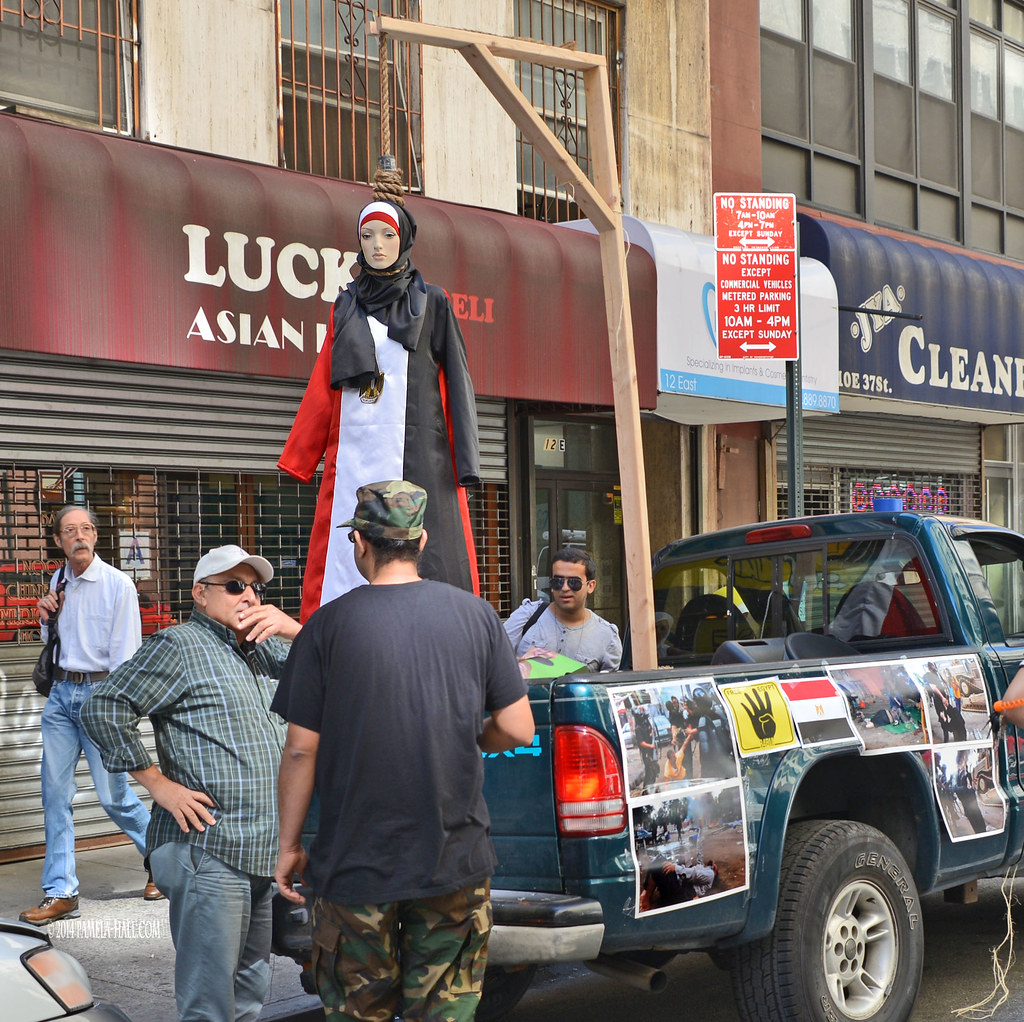 In 2017, the creeping jihad was still at work. Indonesians, historically victims of the Muslim invasions, marched in praise of their conquerors. Islam was forced upon their country at the point of a sword and yet they do not repudiate it. They live the lie that Islam can live in peace with the rest of the world. 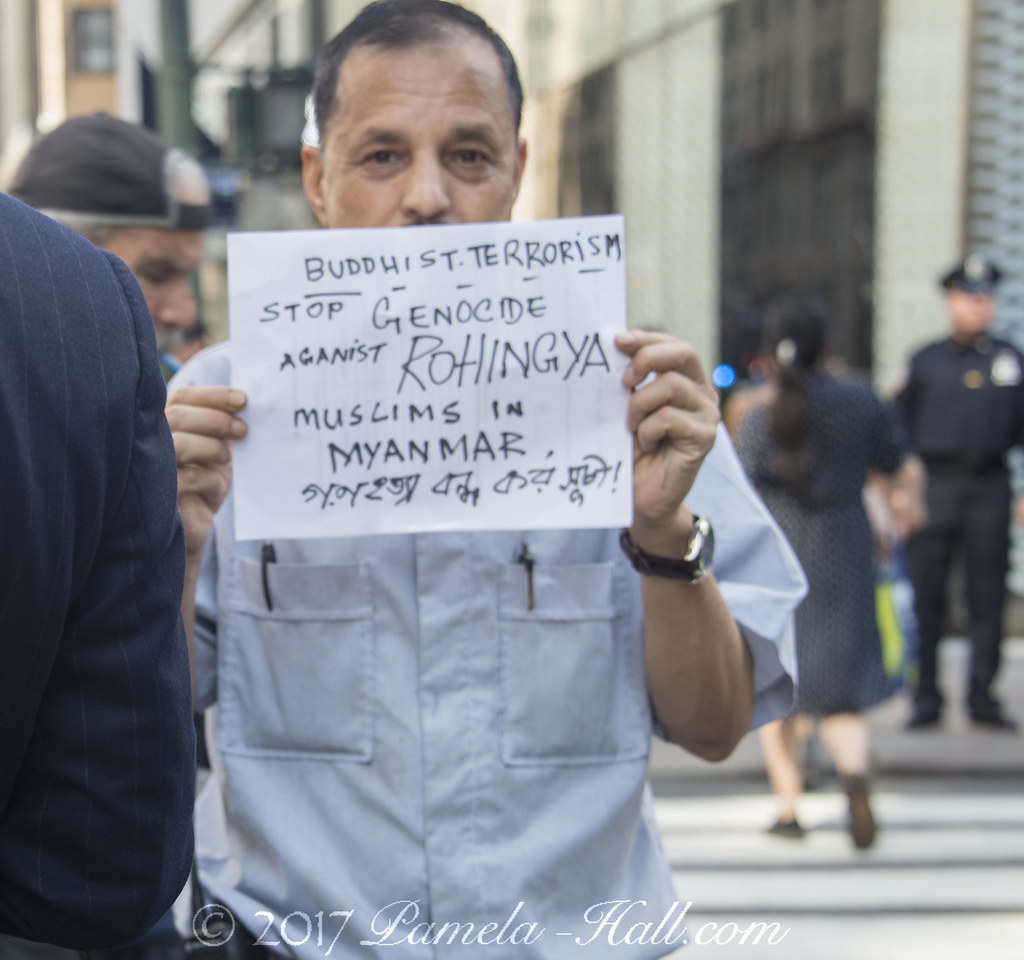 In 2017, the signs of discord were further exposed in the Buddhist uprising in Myanamar. Who is the victim? Who is the aggressor? 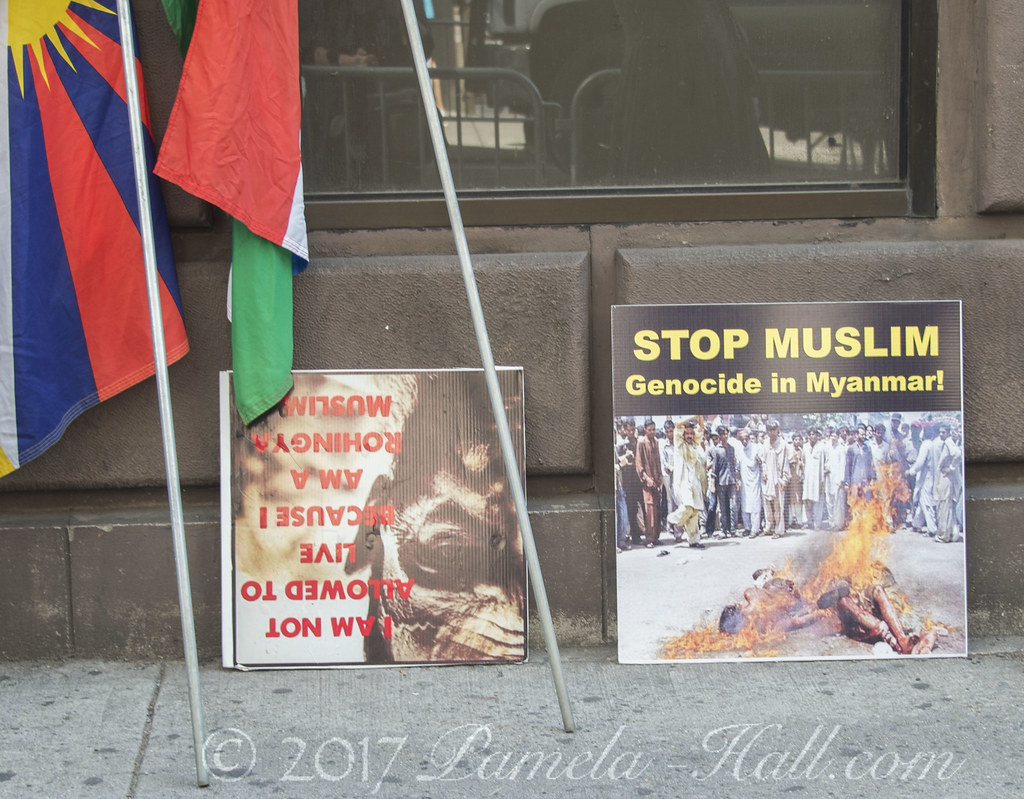 The media and the international elites are framing the jihad in Burma as another “Muslims are victims” story. But it is not. It is another Islamic supremacist holy war to kill and conquer — more of what we are seeing in the Philippines, Nigeria, Kenya, Israel, Congo, Thailand, Chechnya, etc. etc.”Rohingyas threat to national security, they have link with Jihad.” [Pamela Geller]

Is this another Reconquista? Are they taking back their country from centuries of Muslim horror, as the Andalusians did centuries ago? Perhaps Myanmar has had ENOUGH.

Are the second and third generations of Muslims assimilating? I found the remnants of  seventh-century Arabia walking around Times Square.  It was unsettling

Compilation of Parts 1 and 2 (slide show) 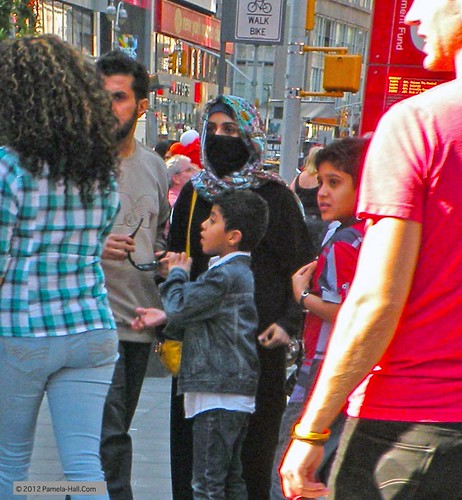 [Where indicated, pictures and videos are property of Pamela Hall]

This entry was posted on October 9, 2017 at 2:44 AM and is filed under News. You can follow any responses to this entry through the RSS 2.0 feed.

One Response to A Retrospective on Muslim Day Parades: Unity, Holy War, and Jailed Virgins