The War On Cops (Stringham vs. Mac Donald) 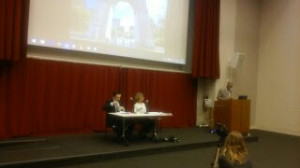 Watching the debate between Heather Mac Donald and Edward Stringham was a fascinating experience for a number of reasons, foremost among them being that it presented two deeply contrasting visions of right wing thought. The former shaped by a deep reverence for social cohesion and ordered liberty, while the latter is influenced by a deeply-held anti-authoritarianism and faith in an unencumbered free market. The point of dispute was criminal justice reform, which was framed by the debate resolution, “There’s a war on cops, and it’s making us less safe.” Mac Donald, naturally, responded in the affirmative, asserting that the most horrific outbursts of violence directed against law enforcement, e.g. last year’s sniper attacks against Dallas police officers, as well as the 2014 ambush of NYPD officers, were a direct result of a deliberate campaign to demonize law enforcement by public officials and political activists. Stringham rejected that claim, asserting that civilians are at much more risk of being killed by police officers than vice versa.

Both perspectives were bolstered by statistics, although Mac Donald also emphasized the human cost of what she perceives to be a lack of faith in the police, including some horrific anecdotes from Chiraq. Stringham decried her “appeal to emotion,” and expressed his belief that his debate opponent doesn’t understand basic statistics, repeatedly hammering home the fact that we are experiencing historically low rates of violent crime and gun crime. He described how data fluctuates, which means you can’t ‘make inferences based on 2 data points,’ i.e. the national and local spikes in violent crime we witnessed in 2015. He asked Mac Donald why it took so long for homicides to increase in New York City, despite a 5 year-long decrease in the number of stops under its stop-and-frisk program-reaching a low of 22,929 in 2015-and why crime in almost every other measurable category continued to decline.

Mac Donald was asked whether her role was to serve as an advocate for the criminal justice system, to which she responded, “no, it’s to combat false narratives.” One of those misleading narratives-and it was this ground upon which I think she was on her firmest footing-is the Black Lives Matter campaign to convince ordinary people that black people are subjected to uniquely unfair treatment at the hands of systemically racist law enforcement. As she pointed out, whites are shot disproportionately during violent encounters with police-she didn’t mention Native Americans, who are killed at a per capita rate exceeding every other ethnic group in this country-when you consider the paltry rate at which they commit violent crime in comparison to other races. Even so, the public knows virtually none of their names, even those who are killed at point blank range, like the late David Kassick. By contrast, black civilians who are killed unjustly at the hands of police are the subject of critically acclaimed films, not to mention being the inspiration for conflagrations which engulf entire cities.

Although Stringham maintained that the racial component of this debate was irrelevant, while asserting that police should not be taxing citizens under the color of law-as many claim was the case in Ferguson, Missouri-his opponent insisted upon pointing out the inherent racial disparities of an purportedly underpoliced society, e.g. blacks dying at a rate 6 times that of whites, as well as the 4,300 people shot in the city of Chicago last year. For what it’s worth, I wish he had acknowledged this aspect of the debate, i.e. that many Americans, whether they’re residents of the Ingersoll or Marlboro Houses, or Camden, New Jersey, live in a very violent and insecure world, even as Americans are generally safer than they have been in generations. A belief that there is a divide along racial lines is perfectly consonant with an opposition to needlessly intrusive, aggressive policing. In fact, the solution to this problem might have been alluded to by an audience member, who asked whether more shall-issue laws might be responsible for a decrease in violent crime.

Stringham also pointed out the efficacy of private police forces, which-unlike law enforcement under our current system-are directly accountable to the public. Unlike cops in the public sector, who often view themselves as fee collectors/enforcers for the state-police within a consensual system actually have incentives to serve their customers, i.e. the public, and not to abuse their authority. Although Mac Donald expressed qualified skepticism about this arrangement, it’s worth noting that there were once entire societies which operated largely within the parameters of private law. Whether or not this is an applicable model in the case of the United States is an open question, although it’s a question which deserves to be asked. After all, if the exorbitant black crime rate is entwined with the familial and social breakdown in black communities, then who is to say that increasingly aggressive policing is the long term solution to this problem?

This entry was posted on February 27, 2017 at 6:33 PM and is filed under Analysis, News, News and Analysis. You can follow any responses to this entry through the RSS 2.0 feed.