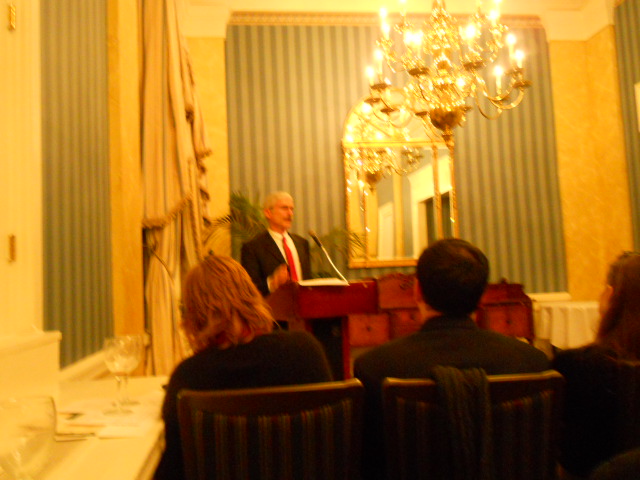 One of the most harmful aspects of our nation’s current immigration policy is its manifold refugee resettlement programs, the disastrous consequences of which have been amply documented on this website. That’s why the speech Don Barnett, currently a fellow at the Center for Immigration Studies and expert on refugee resettlement in the United States, delivered to the Penn Club on Tuesday night is so crucial to understanding the scale of the problem faced by small towns and communities throughout America. A former employee of the United States Information Agency within the U.S. State Department, he spent an extensive part of his career working in the former Soviet Union and Eastern Bloc, which produced most of the refugees brought to the United States during the Cold War Era.

Today we have a much different approach to refugee resettlement that, as Barnett pointed out repeatedly during the course of his speech, is completely untethered to any concrete American foreign policy goal, and which is divorced from any traditional definition of the term itself. Even as President Obama promises to end the signature law that allowed hundreds of thousands of refuseniks and political and religious dissidents to emigrate from Russia and the former USSR, the amount of refugees being sent to America from the third world increases exponentially. As Barnett noted in his talk, and as even open borders advocates readily concede, the United States accepts more than four times as many refugees as every other industrialized nation combined. This despite the ineluctable fact that the pool of genuine refugees has rapidly diminished since the conclusion of the Cold War, a reality that becomes fungible when the very definition of the word refugee is altered in order to encompass everyone who belongs to a specific persecuted religious, ethnic, or political group or gender, even if the person being given permanent residency is currently living in his country of origin. Now even an IDP, or internally displaced person, becomes a “refugee” eligible for possible resettlement in the United States.

Barnett highlighted some of the most deleterious changes in refugee policy over the past 3-4 decades, including the Refugee Act of 1980, sponsored by former Senator Ted Kennedy and current Vice-President Joe Biden, which officially decoupled American refugee policy from American foreign policy goals. This law enshrined the nebulous United Nations definition of “refugee” into American law, allowed the United Nations High Commissioner for Refugees to exercise discretion in referring foreigners-most from nomadic, tribal cultures that have no familiarity with Western norms or customs-to the State Department, and empowered local “voluntary” organizations whose payroll is a function of continued, unwanted refugee migratory patterns to the United States.

These voluntary agencies, or VOLAGs for short, get generous stipends from the federal government, i.e. American taxpayers, for finding purported refugees, as well as compensation for the imputed costs of help rendered to these people, despite the fact that once they arrive in the United States these refugees are abandoned by their sponsors and shunted off to local social service agencies. In fact, “hooking up” these newcomers with already overburdened taxpayer-funded welfare programs is the primary goal of many of these agencies. While only comprising one percent of their clientele, they constitute over fifty percent of their funding, which explains why these groups fought so vigorously against any curtailment in the flow of refugees into the United States following the September 11th massacres, however brief. Catholic Charities constitutes the top leech of these parasitical organizations, generating over half of its annual revenue by bilking American taxpayers, millions upon millions of it earmarked specifically to unravel the social fabric of local communities through the resettlement of  unassimilable refugees from the third world.

Beyond the social and economic devastation this has wrought upon small communities like Lewiston, Maine and Clarkston, Geogia, there exist secondary and tertiary effects of this incestuous relationship between the federal government and the refugee funneling agencies that rely upon it for sustenance. It has crowded out private charities that might have served a similar role-without dunning American taxpayers-as well as fostered systemic corruption in agencies operating under the auspices of the already notoriously corrupt United Nations. The Somali Bantus-probably the most recognizable recipient of State Department generosity over the past two decades-epitomize the deep structural flaws of the refugee resettlement process, from the endemic fraud-even immigration attorneys, when pressed, will concede that over eighty percent of refugees lie during their application process-to its arbitrary selection process, to the lack of proper verification procedures. The latter is a particularly pressing need, since the federal government has promised to do genetic paternity testing-a dubious proposition in a polygamous society such as Somalia-for the better part of a year yet still has not implemented any program to that effect. The corruption of the process is reflected in the allocation of  trafficking, or T visas, which are allegedly reserved for victims of human trafficking. The recipients of these visas are probably viewed by the uninitiated as victimized women and children, but in reality they are men in over 70% of the cases, most of which are labor related and have nothing to do with sexual bondage and trafficking for the purposes of forced prostitution.

The worst part of this situation is that the price tag for supporting these people is astronomical, yet consciously obscured by those who have a vested interest in perpetuating the flow of taxpayer-dependent refugees hosted by the United States. While advocates for these programs maintain that most of these individuals attain “self-sufficiency” within a year, they neglect to mention that their definition of self-sufficiency is based solely upon refugees enrolled in Temporary Assistance For Needy Families, i.e. those who receive direct cash assistance from the federal government. The fact that half of these refugees receive food stamps and are enrolled in Medicaid, that over a quarter reside in public housing-in this city there is a three year waiting list for such accommodations-that they are three times more likely to be enrolled in SSI-a permanent program-and that most do not have medical insurance, and are therefore reliant upon emergency rooms for routine medical care, is never factored into their actuarial tables. Therefore, the true cost of this country’s refugee resettlement program are never revealed to the American public, although it is widely estimated to be more than ten times the one billion dollars in direct cash assistance these refugees receive during any single year.

One very dispirited audience member, during the question and answer session at the end of Mr. Barnett’s speech, asked if there was anything positive to report amid the welter of very depressing information he had conveyed during the course of his hour-long presentation. Although Barnett conceded that the refugee problem was going to be with us for many years to come, he assured the questioner that there were positive developments to report. Here he cited the response of his own city, Nashville, Tennessee, which has rebelled against the increased costs-economically, socially, and culturally-refugee resettlement has imposed upon ordinary citizens during one of the most prolonged economic crises in American history. In the case of Nashville-and the state of Tennessee-the refugees being dumped upon American taxpayers are Kurds. The fact that  Kurds already have a prosperous, fully-functioning autonomous land in which to live-one that is almost paradisaical in nature if we’re to go by the promotional material-has not stopped the State Department from planting thousands of them in the places like Davidson County.

Yet the good people of the Volunteer State have fought back, and just this past June-with the help of the Tennessee Eagle Forum and Act for America-compelled their state legislature to enact the Tennessee Refugee Absorptive Capacity Act. Although watered down after ferocious lobbying from the usual suspects-led by Catholic Charities-it represents a distinctive achievement in the fight to reject refugee resettlement, which impacts every part of the United States. This is demonstrative proof that citizen activism, if focused, can achieve results, and serves as an incentive for anyone who might believe that this is an insoluble problem. The challenge ahead might be difficult, but it is not impossible.

This entry was posted on January 14, 2012 at 4:29 AM and is filed under Analysis, News, News and Analysis. You can follow any responses to this entry through the RSS 2.0 feed.

3 Responses to The Fugees