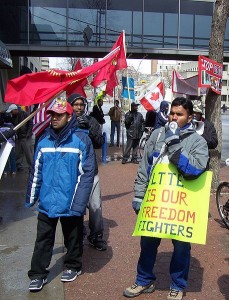 An issue I’ve explored in previous posts, the flood of Tamil refugees exploiting Canada’s generous-verging on the absurd-asylum policies has engendered a situation that is untenable for the current Conservative government and the vast majority of Canadians.

Ezra Levant has a great column exposing the underlying fraud many Tamil applicants for asylum perpetrate in order to embed themselves within Canadian society. Granted, there are probably some legitimate asylum-seekers sprinkled among the potential terrorists and TB-afflicted, but does that justify allowing every single Tamil refugee entree to Canadian society? This question is especially pertinent when-as Mr. Levant so astutely points out-many of these same people will be returning to their homeland very shortly in order to “vacation.”