May Day, NYC (The Marxist Left Unites For Revolution)

There is only one solution: REVOLUTION. REVOLUTION! May Day 2017. Across the country. Around the world. The Media War is winning. The Marxists and their Antifa comrades threaten the free world but the Next Gen Millennials that I saw are mad as HELL and not going to roll over anymore!

The May Day workers who united this day seemed to come mostly from Latin countries. Signs in Spanish. Flags from their countries of birth (no American Flags) but, yes: Marxist flags. Socialist flags. And drums! Always drums mixed with Latin music blasting across Union Square. We weren’t in Kansas anymore. REVOLUTION. REVOLUTION. Yeah, that’s the ticket. Next we heard from Imani Henry – Peoples Assembly- workin’ the crowd.

Enough with the speeches. I moved on to the taking of many pictures of the divergent hoards assembled. My task took wing. Pictures of signs. Lots of signs. Including the white protestors who shilled for The Socialist Green Party, the Marxist.com Party, Bob Avakian’s true Marxist Party. They are the behind the scenes facilitators of the revolution to Free Mumia. To Dump Trump. To Stop Killer Cops. The END to White Supremacy — Cause—- BLACK Lives Matter. 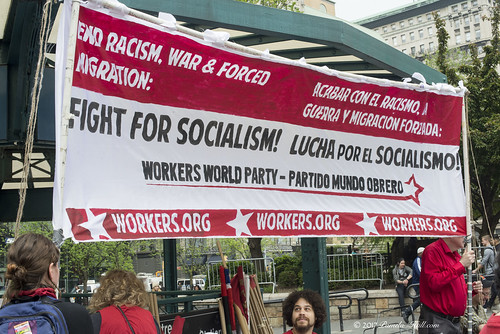 But today was more than just speeches and pictures. Antifa arrived and the game changed. I heard an agitated leftie tell their lead guy to hurry – pointing towards the center of the square -there was “a problem.” 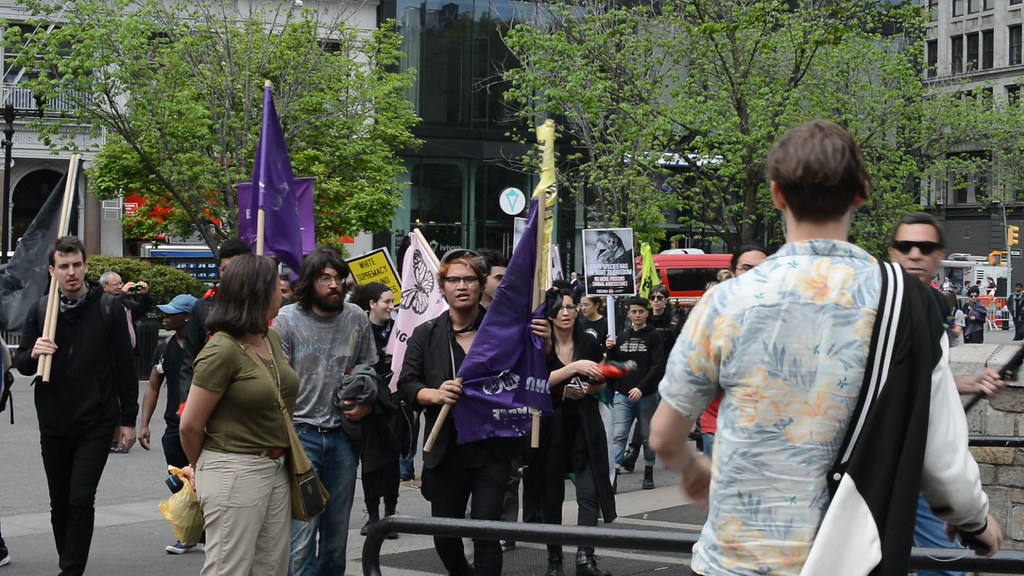 Seems Brittany Venti vs the Antifas was the next event leading to the arrest of this popular streamer. What I think I witnessed prior to the assault is first  presented in a series of pictures mounted in video format.

We don’t want you here!” Imani Henry (seen in another video) was  leading a ‘wall’ of people already harassing Brittany and forcing her and a friend from a Public Square. “ 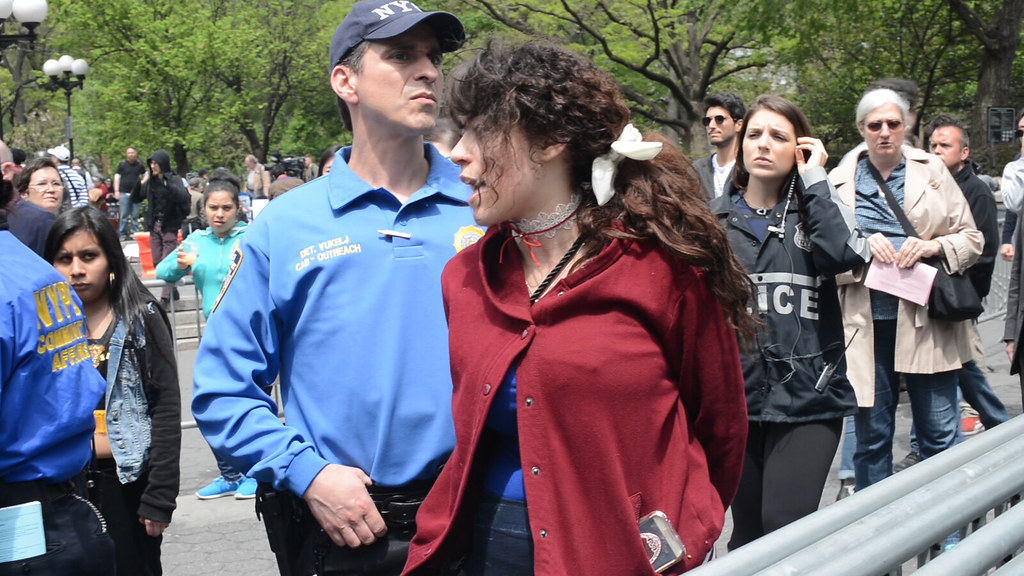 Something happened between Antifa-guy and Brittney, leading up to a  sign hitting her on the head.  She says Antifa-guy  hit her with the sign. Video that was released shows someone does hit her in the head, and Antifa-guy was bloodied near his left eye in retaliation. 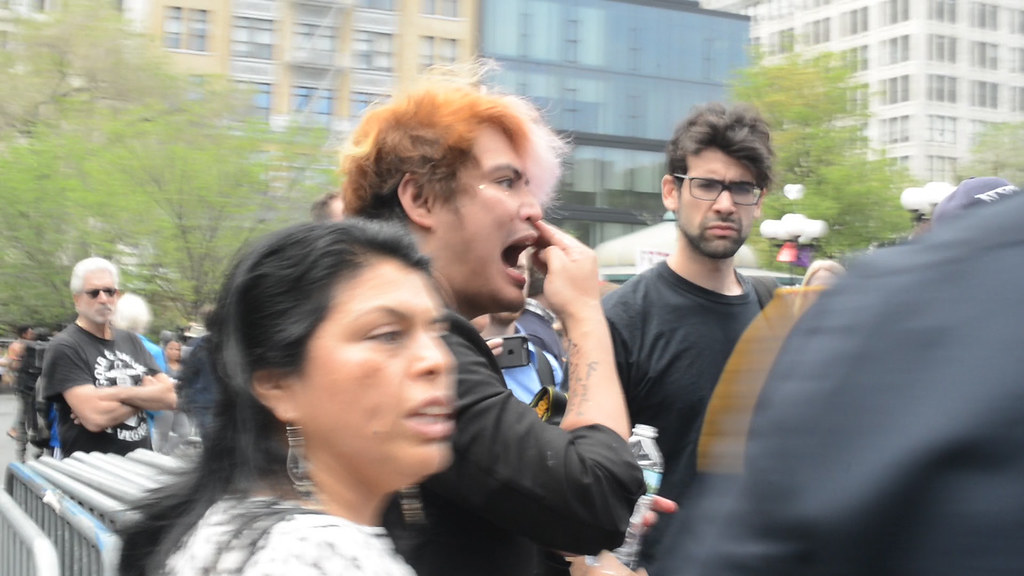 Brittany was not bloodied.  Whatever, they were BOTH arrested.

Brittany talks about what happened. It’s a bit long, but she does give perspective on how she was attacked.  Link to short tweet  video  … from @JessixOW – she shows some of the confrontation. This is a good video that shows how long the harassment went on, how it grew, BTW, “WHERE WERE THE POLICE?”

…. an “alt-right”  (I HATE that bogus label) social media provocateur.

Venti and anti-fascist (Antifa) protesters clashed, eventually resulting in Venti’s arrest and a bloodied protester. The moments leading up to her arrest were captured on a Periscope stream. After the arrest, she claimed someone hit her with a stick. It’s not yet known with what crime, if any, Venti has been charged.

When asked “what do you have to say to your fans,” she replied, “free Brittany Venti!”

THEN there were the Libertarian kids. They too were assaulted. The assault in action. (vocativ. com)

Another scuffle broke out between Antifa protesters and Trump-supporting Libertarians about 30 minutes later, the latter group eventually being be led across the street. The faction of Trump backers, about 30 people at its height, chanted “Build the wall!” and “You lost!” to the May Day participants in Union Square.

Assaulted. Pushed. Flour-bombed  Punched. Crunched. Till finally the police got wind there was something serious happening at the SW end of the Square. No one was actually hurt – that I could see – so perhaps a lot of bluster and show for the cameras- still these libertarian free speech protestors kept smiles on their faces even in the thick of the “madding” crowd. Once on the scene, the police pulled them to the island SE of the square, sharing the area with Pro-Trump Build-the-Wall protestors. Eventually, all joined in the chorus BUILD THE WALL. Pumped. Fearless. Which sent one white, Commie flag waving millennial into a seething rage. From the Union Square side, he paced with his Marxist flag, shouting at the patriots. He was seeing red, but not the kind he wanted.

After the assault video

Gen X Millennials. Self-identified as libertarians. They got spunk.  They are NOT Fascists. They are NOT Nazis. They call out Communism, Socialism, the Soviet Union, et al. They have but one solution: Keep America free of totalitarian despots.

But, Never Forget, why they were there. This was MAY DAY. Commie Day. America, she is BAD. The REVOLUTION is the Only SOLUTION: WORKERS UNITE!