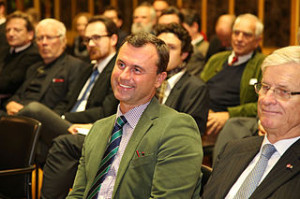 Alas, that seems to be the result. It’s interesting how a man who believes in self-defense, wants to repel the foreign invasion of his country-as well as the rest of Europe-and holds what most Americans would consider to be normal, conservative values, is described as “far-right.” While someone who led the most radical, anti-Semitic, anti-European, pro-Islamist collection of warmed-over Marxists for a decade is characterized with the rather nondescript term “left.” Left of what, exactly? The citizens of that country who want to preserve some semblance of their cultural heritage and security? The (ceremonial) leader of Austria will now be the elderly progeny of exiles from the USSR whose approach to politics can only be described as Stalinist.

One of the reasons the world is in such a parlous state is because of the way our media frames these issues. The misleading narratives they use contribute to the monumental problems, such as the rape of Europe, we’re facing today. It’s something to ponder as you read stories analyzing the just-concluded Austrian presidential race, as well as future European and North American elections.