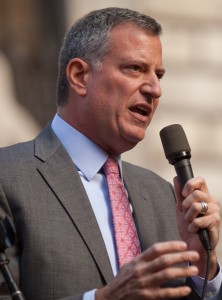 One of the underreported benefits of open borders is its seemingly inexhaustible capacity to enable cronyism. A perfect example being the recent decision by Mayor Bill De Blasio to give a six figure salary-courtesy of New York taxpayers-to his aide’s girlfriend. As the Post reports, the ostensible purpose of this position is to lobby the federal government to do away with whatever remaining immigration controls it has decided to enforce, i.e. wholesale legislative amnesty.

No wonder so many New Yorkers are having buyer’s remorse.

This entry was posted on August 13, 2015 at 11:47 AM and is filed under News and Analysis. You can follow any responses to this entry through the RSS 2.0 feed.